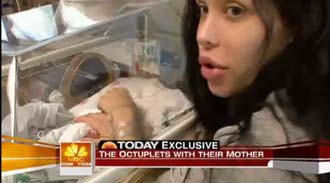 Suleman shows off one of her octuplets on the Today Show
Although Whittier's Nadya Suleman had her sights set on Oprah, the woman dubbed "Octo-Mom" by the media seems pretty content spilling her secrets to the Today Show. She gave her first interview to NBC's Anny Curry, which was broadcast today, and defended her choice to bear 14 children via in vitro fertilization, including the octuplets born in Bellflower two weeks ago.

Suleman showed the babies for the first time today during the interview, revealing that her two tiny daughters and six sons are named after people in the Bible: Maliah, Noah, Jonah, Isaiah, Nariah, Jeremiah, McCai, and Josiah. Although Suleman was released from Kaiser Permanente Medical Center, the fragile newborns will likely remain hospitalized for the next several weeks, at a hefty final tab from conception to delivery and home.

For many, though, the bottom line is just that: A matter of money. Curry told Suleman that many speculated she had the babies in order to make money off them. Suleman replied:

That's funny how untrue that is. Money? Money is necessary to raise children. But it's...it's paper. It is paper. To me, it is superfluous in contrast to the importance of my kids.

Also garnering worry is the paternity of the children, all 14 of whom Suleman credits to the same man, a friend who served as a sperm donor. Suleman said she speaks to the friend a couple of times each year, but he has never seen the children. She says he was "shocked" to know she'd had octuplets, but that she doesn't anticipate him being actively involved in the kids' lives anytime soon. Suleman had been relying on her parents' help--they moved in to the home they bought for her once they went bankrupt and lost their own home--but Mr. and Mrs. Suleman have said publicly they plan on leaving the country soon, leaving Nadya to her own devices...and her 14 children all under the age of 8.

A self-described "professional student" whose own mother sees her desire to have children as unhealthy, Suleman has found herself in an uncomfortable spotlight; she has been criticized for having her last six frozen embryos implanted at once, and her wish to bring so many children into these tough economic times and yet not have secure personal finances has raised not only eyebrows, but serious ethical questions. In fact, Suleman's IVF doctor is being investigated, since it is atypical for so many embryos to be implanted in a woman only 33 years old.

Suleman said she had been working at a state mental hospital from 1997-2006, but received disability payments following an on-the-job injury sustained in 1999. In her interview she revealed more about her income:

Curry said that Suleman also told her that when she was working, she put in double shifts and saved as much money as she could to pay for the in vitro fertilization procedures that enabled her to have all her children. The woman also told Curry that she is relying on her church and friends to be there when she brings the babies home, which is not expected to happen for several weeks.

“I'm not receiving help from the government,” Suleman told Curry. “I'm not trying to expect anything from anybody. [I] just wanted to do it on my own. Any resources that someone would really, really want to help us, I will accept, I would embrace.”

“How will you feed all of your children?” Curry asked.

“I will feed them. I will do the best I possibly can,” she said. “And in my own way, in my own faith, I do believe wholeheartedly that God will provide in his own way.”

Perhaps part of God's plan is the media frenzy surrounding Suleman and her unconventional family; they'll be on NBC's Dateline tomorrow night.