LAistory: The Post-War House & The Home of Tomorrow

Call it a sign of the times: The property on the southeast corner of Wilshire and Highland bears a giant banner bearing the word "Foreclosure."

Foreclosures, sadly, aren't uncommon, but this property seems like a bit of a curiosity, though, if you take a closer look. It's bordered by a low fence, and clearly used as a business, but among all the other offices, restaurants, and retailers in the neighborhood, it seems to be built more like...a home. That's because it was a home—a home nobody lived in but thousands visited in the late 1940s and early 1950s. It began as the "Post-War House" and morphed into the "Home of Tomorrow" then became home to realty offices, then slowly aged itself into near-obscurity, its purpose long-forgotten, and, clearly, its mortgage long-overdue.

The end of World War II brought most urban centers, including Los Angeles, into a housing crisis. Vets were coming home and were ready to settle down with their families. Women hung up their "Rosie the Riverter"-inspired work gear and went back into the home. America was changing, and so were its residents' everyday needs. Fritz B. Burns knew this, and he worked througout the 1940s to promote affordable housing in Los Angeles to accomodate the changing population. 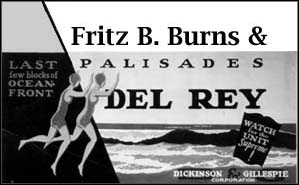 Burns had come to LA from Minneapolis in the 20s, and first worked as a salesman for a development firm called Dickinson and Gillespie. He moved up in the company, and in the 1930s put together his own firm, the Marlow-Burns Development Company and "introduced innovations in prefabrication techniques for the production of affordable homes," according to one biography. He worked with Henry J. Kaiser to build Kaiser Community Homes, which were planned suburban developments in neighborhoods like Westchester, Westside Village, North Hollywood, and Ontario; together they built "thousands of attractive homes that sold for less than $4,000 and which could be purchased with a down payment of only $150." Take Panorama City, for example; according to the neighborhood's Business Assistance Program's site:

In 1945, Panorama City was envisioned as a bustling residential, employment and retail center. Planners Fritz B. Burns and Henry J. Kaiser’s slogan for the development was “build a city where a city belongs.”

But Burns wasn't focused only on the Veterans and planned communities, he also wanted to show Angelenos how well they could live in the post-war years. And so the concept of the Post-War House was born. 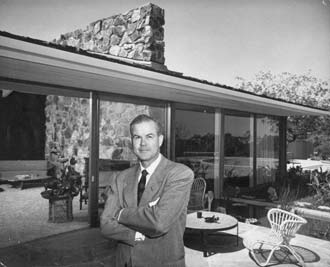 Burns paired up with J. Paul Campbell, and commissioned architects Walter Wurdeman and Welton Becket to design the house. The pair was a very logical choice:

Incorporated as Wurdeman and Becket in 1939 [...] the firm prospered and expanded during the World War II era, completing public housing and defense projects and positioning themselves well for the region's post-war construction boom. Now focused on larger commercial projects, Wurdeman and Becket's work of the mid- to late 1940s took on aspects of the Late Moderne and International styles. Their best known commissions included Bullock's Department Store in Pasadena (1944) and buildings for General Petroleum (1946) and Prudential Insurance (1947) in Los Angeles. [Teresa Grimes, via The Music Center]

Although Wurdeman sadly died of a heart attack in 1949, Welton Becket and his staff would go on to put their stamp on the architecture of Los Angeles, including such globally recognizable structures like the Cinerama Dome and the Capitol Records building, as well as the Beverly Hilton, the Music Center, and, with other partners, the LAX Theme Restaurant and much of UCLA. Of course, those places are all other stories...

The Post-War house at 4950 Wilshire Boulevard was designed to address some very specific questions Burns and his co-visionaries felt needed answering: "What innovations have come from architectural, building equipment and manufacturing sources to enhance the durability, charm and convenience of the home? How do these products of science and skill demonstate home modernity entirely apart from fantasy?" ('"'Post War House'").

Ultimately, what Burns wanted to do was to create the ultimate show-home, featuring "all the modern conveniences available to new suburbanites," explains Kevin Roderick in his book Wilshire Boulevard. The house was filled with all sorts of gadgets that were supposed to be the next wave in homemaking, and was decorated and furnished by nearby Bullock's department store. Roderick notes that the "Post-War House" was really all about innovation:

Burns [...] introduced a million visitors to advances such as electric garbage disposals, two-way intercoms and automatic climate controls. Bathrooms came with built-in sun lamps and tank-less toilets. In the backyard, Becket installed a built-in barbeque with sink and refrigerator area, in a patio area visible from every key room. It was innovative design for the 1940s that became routine in countless Southern California homes. House Beautiful magazine devoted a whopping forty-two pages to the Post-War House in its May 1946 issue.

So how did all those people get in the house to see its wonders? Easy. Burns marketed the Post-War House as a public attraction; he charged $1 a head and allowed visitors to check it out every day of the week--even Sunday!--from 11 a.m. to 9 p.m., with local charities accepting the proceeds for periods of time. As an indication of where Burns' loyalties rested, it's noteworthy to mention the first charitable beneficiary was the St. Anne's Hospital Guild, an organization that included Mrs. Fritz B. Burns as a key member. (St. Anne's is another remarkable piece of LA's history; it opened in 1908 as a place where unwed pregnant women could go to have their babies in secrecy, and now is one of the foremost "social service agencies committed to developing and sustaining programs that address the special needs of at-risk, pregnant and/or parenting young women and children.") 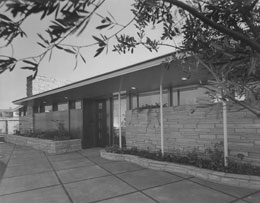 The Post-War House was a hit, and saw an "estimated 1 million visitors who trooped through to gaze upon such domestic wonders as the Precipitron, an electronic air purifier slightly larger than a refrigerator," and all the other marvels, explains Christopher Reynolds in a 2003 LA Times article.

Although the home did seem to inspire the masses, the masses eventually grew weary of the attraction, and visits dropped off. By around 1949-50 Burns decided to rethink the endeavor, and he shut down the Post-War House and put it through some renovations. He made some key changes, then threw open the doors once again, calling it the Home of Tomorrow. A March 1951 LA Times article hailed the new exhibit:

The all new Home of Tomorrow stands on the site of Fritz Burns' Postwar House, which attracted more than a million visitors from the time it was opened in 1946 until the doors were closed a few months ago. Now it is reborn with even more fabulous ideas for home building, refurbishing or just dreaming.

The Home of Tomorrow, U-shaped in plan, utilizes redwood batten, flagstone and sliding glass walls for its informal exterior. A detached oversize carport, also of fieldstone and redwood, incorporates a separate room which serves the double purpose of workroom and storage area. Altogether the house contains 2400 square feet.

The emphasis throughout the Home of Tomorrow has been the indoor-outdoor California way of life, with the wings of the building itself flanking a large landscaped court.

The Home of Tomorrow had a very showbizzy premiere, complete with "twelve giant searchlights and orchestra music in the traditional Hollywood pattern" with "four hundred civic, religious, social, business and film industry leaders" ("Home of"). Celebrities like Irene Dunne, Bob Hope, Joseph Cotten, Ethel Barrymore, and Loretta Young all stopped by. But of course, the Home was for "everyday" people, and as an April 1951 LA Times article explains, "a large percentage of the visitors are Southern Californians planning to build homes for themselves." They could then return to their own properties and make the changes: "The workable ideas presented can be adapted, in many instances, to homes ranging in price from $15,000." 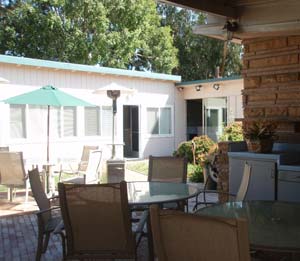 But all good things must come to an end. Eventually the Home of Tomorrow was no longer of interest, and Burns decided to close the doors permanently. He moved his own realty firm into the building and it served as his offices for many years. In his 2003 article, Reynolds noted "today, the interior has been altered beyond recognition and houses a German social club and a Korean newspaper. The Precipitron is missing."

Indeed, much is "missing" from the Post-War House/Home of Tomorrow.

Last fall, CurbedLA noticed that the foreclosure sign was up on the property, adding: "Wow, things seem bleak when the city's architectural gems are being swathed in large foreclosure signs." They explained that the building had been put on the market in January 2008, but had clearly not attracted a buyer, and in the meantime, the current owner had obviously been unable to keep it afloat.

One would hope that with the often-fervent devotees of restoration in Los Angeles that the building would be adopted as the cause of an organization like the Los Angeles Conservancy, namely their ModCom branch dedicated to Modernism, but, sadly, they've already said no. Not long after CurbedLA ran the story last fall, they provided this information which came to them via Chris Nichols, a local historian and an associate editor at Los Angeles magazine: "Unfortunately, the current condition of the house (interiors stripped) has led the Conservancy board to vote against pursuing a preservation plan of the building. I personally feel it has tremendous significance, it's the 'floor sample' of the valley. Presented here on Wilshire Boulevard. Becket and Fritz Burns are both such major figures, too."

"Interiors stripped" is pretty gut-wrenching to read when you realize how pretty darn cool the interiors were in the first place. With the building not being listed on the historic register, there is nothing to stop an owner from tearing down the building entirely. 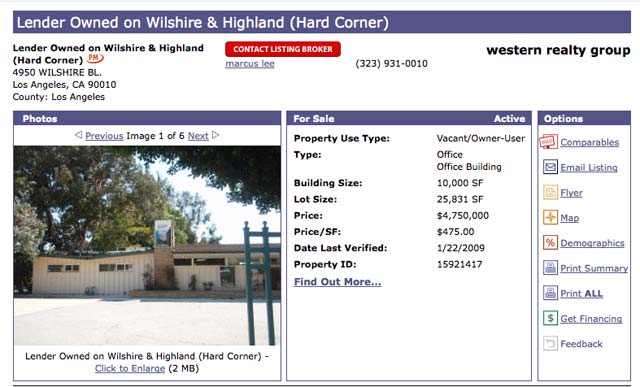 The listing for 4950 Wilshire Blvd/Screenshot from LoopNet

But although it won't likely be rescued by the Conservancy, the Post-War House/Home of Tomorrow is still up for sale (as of Jan 22, 2009) according to realty listings site LoopNet. It's described as a "lender owned" 10,000 square foot property, "dream location" for an entertainment company, medical office, or bank, with 17 offices, 3 conference rooms, a large lecture room, and a full kitchen.

Images (unless otherwise credited)
Palisades sign: From an LMU Exhibit
Becket in 1953 from LIFE Images via Google
Image of Post-War House via LA Observed
Patio of the Home today/via LoopNet