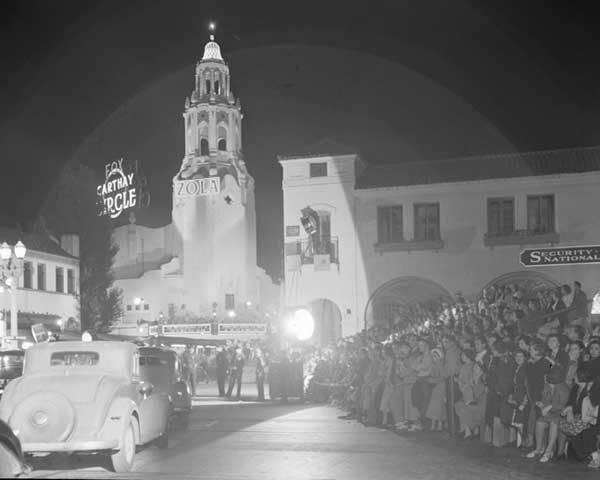 All cities have the things they’ve plowed under. In Los Angeles, we still have whole neighborhoods that are named after things that aren’t there anymore. The Carthay area is named after a legendary movie palace, the Carthay Circle Theater. Other areas are also named after movie theaters, like Picfair, but Carthay Circle was considered on par with Grauman’s Chinese and second to none.

A first run, road-show house, Carthay Circle was built in 1926, in the Spanish Baroque style. Designed by A. Dwight Gibbs, its fifteen hundred seats arranged in a circle with space only for the screen. It was built to amaze, with its grand tower, fine tile work and crystal chandeliers. At night, it featured an enormous neon sign and the gorgeous arches of the building itself were lit with floodlights until it looked like something out of a fairy tale. Even the ceiling was a beautiful blue, black and gold circle with a many-spoked star in the center. 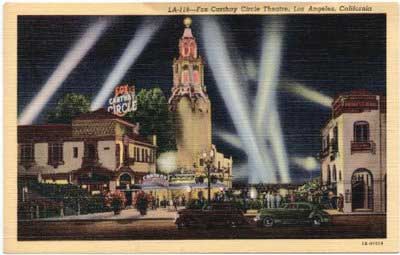 It was originally a silent picture theater, complete with a Wurlitzer Theater Organ. It also hosted plays and other live shows (magic for instance. In 1955, Isabel Bonner dropped dead onstage there during a performance of “The Shrike.”

Much of the art it was outfitted with celebrated the explorers of the wild west who settled California. There were the usual saddles and other paraphernalia. There was a bas relief of a pioneer woman standing near a wagon wheel in the lobby fountain, a painting by Frank Tenney Johnson that celebrated the first movie theater in California in 1849 (the Eagle Theater in Sacramento.) Even the drop curtain was dedicated to the Donner Party (called “An Emigrant Train at Donner Lake” also by Johnson.) There were busts and plaques celebrating scouts, a guy who carried mail over the Sierras and of course, Dan the Miner, which sat in the theater’s vast forecourt as part of a fountain. Some of these were chosen by the Sons of the Golden West. Many still exist in the area. 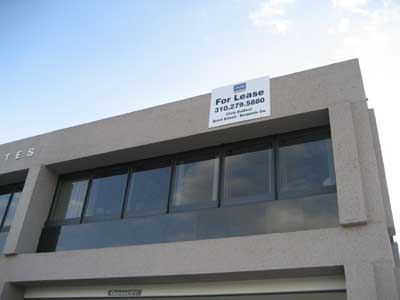 Often the medians in the street were tricked out with sets from the movies that were premiering, including Snow White, which debuted at Carthay Circle in 1937 (and is one of the reasons that Disney is chose to reproduce the theater in its new entrance to California Adventure.) Another time they recreated the gardens of Versailles to celebrate the opening of Marie Antoinette, with Norma Shearer and Tyrone Power. In 1956, they messed up the inside of the theater when they installed two TOD-AO projectors so they could run Around the World in 80 Days. At the time, only two other theaters had them - The Egyptian and the United Artists downtown.

The first movie ever played at Carthay Circle was the premiere of Cecile B. DeMille’s, Volga Boatman. Other movies that world premiered there were El Cid, The Alamo and The Life of Emile Zola. Memorable reissues that played there included Gone with the Wind, The Great Ziegfeld, Mary Poppins, and Fantasia.

The last performance at Carthay Circle Theater was in November 1968. The Shoes of the Fisherman was played. The TOD-AO projectors went to Fox Westwood Theater (one was replaced in 1994.) There were a lot of excuses about why it was demolished - it was vulnerable to earthquake damage, it was losing money in an age of multiplexes. There are rumors that the developers planned to raise a huge office tower and rearrange the major streets -- a move that would ruin the small neighborhood, but activists protested and forced them to build a small park in the center of their property, and so they built two shorter structures that are broken up by the park. Today these offices aren’t even full. 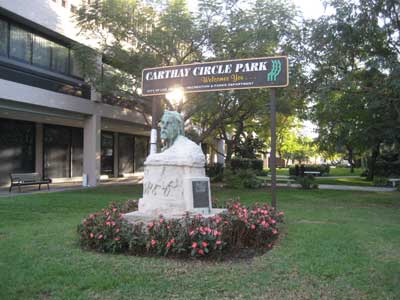 It would be nice to think that in this day and age, we know better than to give up such treasures, but only two years ago, we took down the Ambassador Hotel. We may be a city of immigrants, but that doesn’t mean that our history shouldn’t be honored. Our children deserve that. We have to be vigilant.