ScientIST: No Butts About It 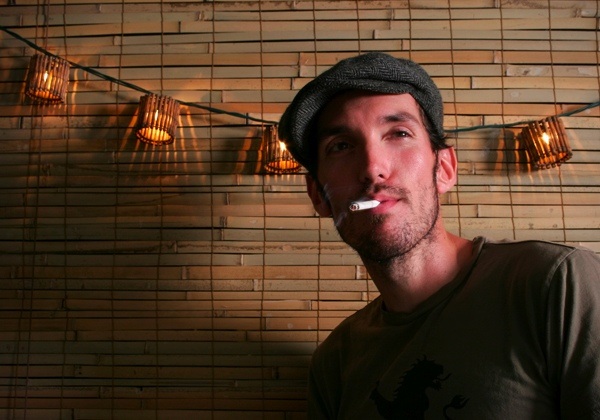 His lungs are unhappy, we promise. | Photo by Rachael Porter via Flickr/used with permission

This month, the ScientIST has been focusing on how to make you better in 2009, whether it’s changing your eating habits or getting yourself to the doctor for a checkup, and this week’s column is no different. Face it kids, it’s finally time to quit smoking.

My first cigarette was a thing of tall tales. I was 14, growing up in the ‘burbs of OC (well before it was The OC), and my best friend C and I were just discovering the thrill of sneaking shots of Jack Daniels from her parent’s cherry wood liquor cabinet and dancing around her bedroom to the sweet sounds of 2 Live Crew. Despite our hard-earned 4.0 GPAs and honor’s society memberships, we secretly sought defiance among the carefully manicured lawns and rebellion from a structured life seemingly planned out before our birth.

One night, we found ourselves doing 90 in a Honda Civic en route to an industrial park in Santa Ana, C and I cramped in the back seat, her freethinking, gorgeous-in-a-granola-sort-of-way older sister and her strung-out acquaintance up front. C and I were told to wait in the car until they came out, but after an hour brainstorming about what the hell was going on (how were we so naïve?), our anxiety called for the Marlboro Lights we knew were stashed in the glove compartment. I took a nervous first drag, I hacked, I recovered, and I dragged again. C let it go after a few non-inhaled puffs, but I pulled hard and finished it, ashing as I remembered my crush (a senior) had - flicking the filter with his thumb, all Jake Ryan and nonchalance.

It was about this time that we were ushered inside a nondescript building through a tinted glass door, and forcefully instructed to "Not look at anything" and play ping-pong until her sister and the hyper kid were done. Suffice it to say, cigarettes and stressful situations became inexorably linked in my psyche.

For the next 16 or so years, I used cigarettes to calm almost any situation, be it bad news, uncomfortable silences, first dates, or loneliness. I would rationalize that whatever negative effect stress was having on my body and mind far outweighed the health risks of a few cigarettes now and again. I never smoked more than 5 cigarettes a day, even in the height of my stressful college years. I tried to quit a handful of times, but erroneously believed (like million of others) that casual (weekend) smoking wasn’t as harmful as a pack a day habit, since my lungs had time to repair between cigarettes.

What’s so harmful about smoking and why can’t you stop? The American Cancer Society and the CDC provide a litany of reasons why cigarettes are awful, the Big C topping the list. Brought about by the 4,000 or so nasty chemicals that are found in cigarette smoke, tobacco use takes the lead as the most avoidable cause of cancer, causing an average of 30% of all cancer-related deaths each year. Smoking is also is associated with respiratory and cardiovascular disease, as well as increased risk of infectious disease. Furthermore, the idea that your habit is only killing yourself has been challenged by the overwhelming research on secondhand smoke, indicating that your loved ones (and the random folks at the table next to you) are at risk from the same diseases as you, no direct puffing necessary.

It’s a no-brainer that no one wants cancer. And yet, here we are again, at the corner 7-11, buying water, gum and…another box of smokes. Rest assured, you’re not the walking definition of insanity. We stay with it because of the nicotine. When you inhale, nicotine moves from the lungs into the blood stream where it crosses the blood-brain barrier and heads directly for your nicotinic acetylcholine receptors (nAChRs). Binding of nicotine ultimately releases neurotransmitters, some of which aid in the reinforcement of self-administration. You smoke and then you want to smoke more. Like any drug addiction, it’s a vicious and destructive circle, if not a socially acceptable one (alcohol, anyone?).

You know why you shouldn’t smoke, and you know why you can’t stop. What’s next? First, you need to really want to throw in the tobacco towel. Second, you need to have a reason why - I’m afraid of dying of smoking-related diseases, I don’t want my kids to see me smoke, I’m pregnant, I’m tired of having no energy, etc. It doesn’t matter WHAT it is, only that it resonates deeply with you. Lastly, I firmly agree with those that believe smoking is a chronic addiction and that each day you have to renew your commitment to take the necessary steps to fight this addiction.

The nuts and bolts of this cessation, however, are up to you. The first place to start is with your doctor, or one of the many websites dedicated to quitting (like here, here, and here). Draft a plan and a back-up plan so you’ll have procedures in place keeping up the good fight when one path isn’t working as well as you’d like. Pick a specific day and time to quit, and tell your friends, family, therapist, neighbor, bartender, etc. of your resolution. Letting others know of your goals will help keep you in check and form a level of accountability that will aid in your successful cessation.

Cold Turkey
Everyone knows someone that has quit in this fashion: One day, they wake up and decide to break all their cigarettes into little pieces and throw them out with the used cat litter. They Febreeze the hell out of their car, their couch, and their carpet, and wash and dry clean all their clothes. They don’t ever touch another cigarette again. They don’t rely on drugs to help with the cravings. They just STOP.

It’s doable, and I’ve heard many a success story, but most people need some kind of additional help with the cravings. It’s OK to admit that cold turkey isn’t your bag. It doesn’t make you weak, or a mess, or less apt to stay true to your goals. It just means it’s not the method for you.

Medications
There are a wide variety of drugs that can help you stay the course. The nicotine replacement therapies (NRT) - gum, patch, inhaler, lozenge, and nasal spray - are all designed to help assist you with the withdrawal period and the associated deep-seated nicotine cravings. Most are over the counter, so find a reliable pharmacist to help you understand which product will best fit with your lifestyle. Start with the appropriate dose based on your cigarette usage and use the product correctly and fully.

There are available prescription meds on the market (bupropion and varenicline, both of which do not contain nicotine), but you’ll need to see your doctor to obtain them. Like most prescription drugs, they have associated side-affects and are not recommended for all people, but they can be a positive addition to your smoking cessation plan.

Lifestyle Changes
Most people associate smoking with something else - food, heartache, stress, certain friends, coffee, the neighborhood bar, Friday nights, work breaks, etc. You’re going to need to break some of these connections in order to give yourself the greatest chance at success.

Initially, it might be helpful to sever ties with your temptations, and as your cravings subside brainstorm healthy ways for reintroduction. For instance, if you always smoke after eating, it might be helpful to take your NRT at that point, or take a short walk. When your friends go out for a smoke at the bar, attend to your texts and emails or chat up fellow nonsmokers.

Alternative Therapies
Research indicates that hypnotherapy may be an effective alternative method to traditional nicotine replacement therapies for smoking cessation. Although the mode of action is still unclear, hypnotherapy involves entering a “trance-like” state (usually in the help of trained hypnotherapist) that is thought to create a canvas applicable to behavior modification.

Additionally, hotlines, groups, and therapy can provide positive feedback on your quitting, and offer support and encouragement when/if you slip up. Speaking of which, there’s a likely chance it will happen. The absolute worst thing you can do is give up. It’s like dieting - just because you wolfed a pizza and 4 beers tonight doesn’t mean tomorrow isn’t a brand new day to rethink portion control. It’s the outcome of the war that counts, not every single skirmish, my friend.

For me, I quit my casual weekend smoking for a variety of reasons. I quit for my family, because I don’t want to knowingly engage in behavior that might ultimately limit my time with them. I quit because I’m turning 32 this year, and smoking seems less “cool” and more “desperate” at this age. I quit because I’m vain, and I can’t hang with the associated wrinkles (I’m paying for the years of beach going as it is). I quit because I’m a scientist and if anyone should know better, it's me. But mostly I quit because I’m ready to tackle the stress and anxiety that kicked off the habit all those years ago and perpetuated it ever since. So, Los Angeles, who’s with me?