Dispatch from the Inauguration: 'I Would Not Miss This for the World' 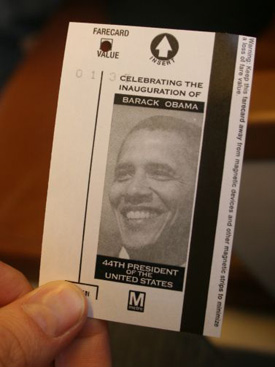 A Metro fare ticket | Photo by Jeremy Oberstein/LAist
With one day left until Inauguration Day, thousands of constituents fanned out among hundreds of congressional offices Monday to collect their prized Golden Ticket to today's swearing in.

240,000 tickets were handed out by Congress, but hundreds more pressed their luck, hoping to secure a place for history. One couple, a young boyfriend/girlfriend duo from Pasadena, showed up at Democratic Rep. Adam Schiff's prepared for nothing, but hoping for everything.

The couple knew their chances were slim and their venture to Schiff's office proved fruitless. Still, buoyant from a pervasive sense of change that has enveloped D.C., the pair did not sour after the Pasadena congressman said the best he could do was put them on a waiting list.

"Oh, we're still going to be there," the girlfriend said. "I would not miss this for the world."

The atmosphere in Schiff's office was festive, as it was in other congressional offices. Champagne chilled on ice as visitors shoved pastries into their mouths while waiting in line to speak with Schiff. He yucked, smiled and generally excelled at being a politician.

Some had their picture taken with the congressman, others with a life-size cutout of Obama that proved ubiquitous (and really creepy) around Washington. Residents laughed and gleefully paraded their tickets to anyone watching in the hallway.

The scene was quite different two buildings down, in Rep. David Dreier's office. When one resident picked up his tickets, the office of the San Gabriel Valley Republican chair of the Rules Committee was relatively quiet. The celebratory hum of Schiff's soiree was bookended by the mood killer that was Dreier's office.

Four staffers handed out packages with cool indifference as the congressman was locked in a closed door session, reportedly with Gov. Arnold Schwarzenegger. There was no champagne, no food and no hellos from the representative. That scene was replayed in other, though not all, Republican offices.

Outside, it was a madhouse. Lines stretched around the block as traffic snarled at nearly every intersection in a 2 mile radius. Security was also beefed up and by midnight Monday, a pair of National Guardsman patrolled almost every street corner in Washington, even ones outside of the general vicinity of the Capitol building. 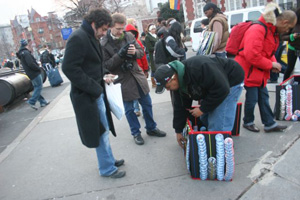 Vendors hawking their wares near Dupont Circle in Washington, D.C. | Photo by Jeremy Oberstein/LAist
Then, of course, there was the merchandising. Every manner of pins ("Children for Obama"), hats, stickers and posters lined street corners. Giddy tourists happy to commemorate the occasion forked over dollars as vendors could not keep their wares in stock fast enough. That is to say nothing of Obama's omnipresence EVERYWHERE in Washington: on Metro tickets, on billboards, on signs that aren't even for him.

"Doesn't it make you a little uncomfortable," one person asked. "I mean, he's like a king."