View Larger Map
LAist contributor Jeremy Oberstein is traveling east this weekend for the 2009 Inauguration of President-elect Barack Obama. What makes this trip different from the estimated two million slated to converge on the National Mall? He and two other Angelenos are making the trip by car, driving a total of 5,724 miles in a week. Follow his journey on Twitter and each day on LAist.

We left Los Angeles at 6:20 p.m. Friday, just minutes after our self imposed start-time. As life-long Angelenos, we knew the glut of cars on the city's arterial roads and highways stood in our way. Fine, whatever. We would deal. But the extent to which rush-hour delayed our departure from Los Angeles was vastly under-estimated and highly depressing.

We averaged about 16 mph for two and a half hours, gaining only 28 miles in that span and fearing the worst: we would be severely delayed, miss the window for picking up tickets and miss the inauguration after having trekked across some very beautiful and shitty very parts of this nation.

Somewhere near the Arizona/New Mexico border. Photo by Jeremy Oberstein, for LAist.

Finally, though, the jam relented and we busted out from the city limits toward Riverside via the 10 Freeway.

From there, we cruised through the night with the wind of Inauguration adrenaline in our sails. We sped through Indio, Coachella and Blythe, where the 95 Freeway and 10 bisect. It was pitch black for hours with just the glare of oncoming traffic and our own beams to shine the path. It was spotless and simple until we happened upon the green fire in the sky.

At first it seemed more than extraordinary. At about 11 p.m., having just crossed into Arizona territory, three columns of forest green light shot up from the bushes immediately to our right. They formed perfect angles against the dark night and thoroughly spooked the road trippers. We debated, contemplated and conspiracy theorized faster than you can say UFO.

We instantly sympathized with those crazies, who swear they saw Something out there but could not explain its mystery. But here's the thing about the unexplained: there's always a rational explanation and ours came in the form of a teenage punk with a predilection for shining shininess on the highway in the mid of night.

As sporadic flashes of green light danced off road signs and on the backs of big-rigs, we saw the guilty party in a grey Chevy Astro minivan, which explained so much.

Angry truckers and annoyed drivers honked and waived. It was entertaining, but we had more pressing matters and could not be slowed by the side show. 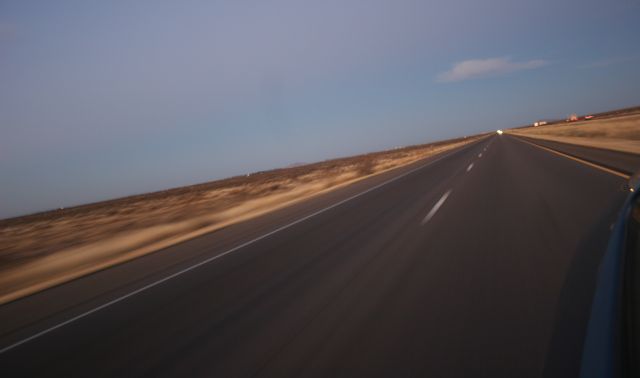 Upwards and onwards toward our destination: El Paso, Texas. We were flying without worry, making great time despite the maddening start to our voyage. It was about 6 a.m. when, into New Mexico daybreak slid across the sky. The sun slowly rose over the eastern mountains and we pulled into a Cracker Barrel, sticking to Southern tradition that stretches back years.

By 9 a.m., we camped out in a dank motel along the route and slept until 4 p.m., when we set off once more for our next destination: Shreveport, LA.