In less than 24 hours, your LAist Inauguration 2009 correspondent will set off on a mad dash toward Washington, D.C., along 2,870 miles of this nation's most barren and beautiful landscapes.

Through 10 states and four highways, I and two other Angelenos will drive toward a massive storm of an estimated two million people from around the country and world who will crowd this nation's capitol for the historic moment.

The allure of seeing history is quite understandable. The logic of driving, however, is dubious and requires explanation I'm not quite sure would survive much scrutiny.

In any event, the decision to set off on this journey came like a lightning bolt of the highest order. It was the first week in January, weeks after the congressional allotment of tickets to the ceremony had been handed out to constituents and VIPs. But that was of no concern during the initial rush of decision making, that euphoric moment when common sense cedes from planning. The drive, the inauguration, the history: those were the primary factor. Tickets, crowds and 20-degree weather be damned.

The fix was on and the planning commenced with one nagging worry, namely that we were about to drive across the country to watch an event on a big-screen television from the middle of a field in the dead of winter. Would someone drive to the Super Bowl to sit in a bar around the corner just to bathe in the warm embrace of proximity?

Not content anymore with merely just being there, I searched, and I called and I prodded for tickets. Working at a newspaper allows me certain perks (sanity not being of them) not available to others. I had established some pretty tight contacts on Capitol Hill, though each initially told me there was no way of securing any extra tickets.

House members received a brisk allotment of 198 tickets, while Senate offices nabbed 393 invitations. When you consider that each office fielded thousands of requests from constituents and thousands of other high-rollers needed to go, it's acceptable to say that this is one of the hardest tickets to score in recent memory, certainly more than in 2005. 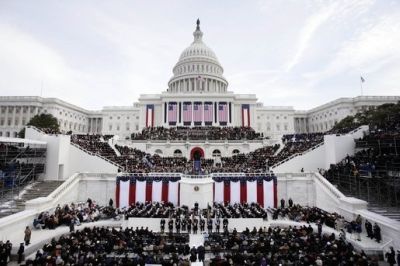 The dominoes began to fall late last week, when one congressman, after learning of my road-trip, offered to set aside one ticket. Days later, another put two away and the drive began to shape up less as an amorphous journey to the center of a massive crowd than as up-close observers to the inauguration, in and of itself a rare moment that has happened less than 60 times in our 233-year history.

We are set to leave Friday, no later than 6 p.m. and need to arrive on Capitol Hill by 4 p.m., Monday. In between, we plan on resting in each of those lettered markers above with brief stops in American cities to gauge the impact of Obama and the stir his quadrennial nominating ceremony has caused.

LAist will have much of updates as well as Twitter and other media outlets that may tag along for the ride. There will be video, audio and words from L.A. to D.C. Every television station will show you the inauguration on Jan. 20, but we will deliver the emotion from the not-so-cheap seats as Obama tell us that he will "support and defend the Constitution of the United States against all enemies, foreign and domestic."