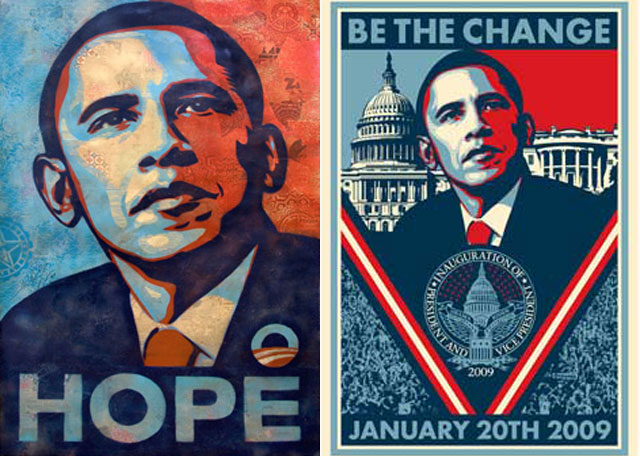 The Smithsonian's National Portrait Gallery this week announced that they have acquired Shephard Fairey's collage portrait of Obama that was a defining image of his campaign. "This is the original collage that the prints and campaign materials were based on," museum spokeswoman Bethany Bentley said in an email to Jesus Sanchez at The Eastsider LA, a blog devoted to the city's region where Fairey's studio and gallery resides.

The five-foot-tall artwork was donated to the museum by local Washington D.C. collectors Heather and Tony Podesta, whose brother heads up the transition team for Obama. It was bought for an undisclosed amount of money and will be on display in time for the inauguration.

In related Obama-Shepard news, the new inauguration poster (above right) is now available. "If anyone is realizing the marketing potential of Barack Obama, it is Mr. Obama’s marketers themselves," observed the New York Times. "After all, Advertising Age, the bible of Madison Avenue, named the Obama campaign 'Marketer of the Year' last fall, citing in particular its ability to brand itself. Obama beat out marketing heavyweights like Apple, Nike and Coors. And that was before he got elected."

And purely on the Shepard side of things, Saks Fifth Avenue had him design its catalog covers and shopping bags (photos below):