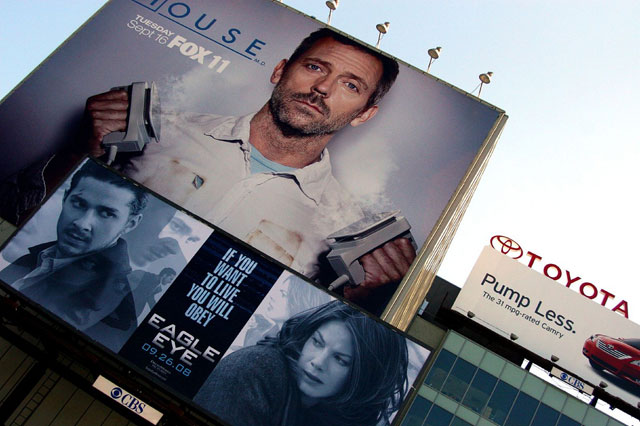 Photo by atomicshakespeares via LAist Featured Photos on Flickr

In a ruling that surely is making neighborhood activists rejoice, the 9th Circuit Court of Appeals "ruled that Los Angeles’ 2002 citywide outdoor advertising ban did not violate a sign company's 1st Amendment right to free speech." This means the city, which attempted to regulate the thousands of blightful billboards seven years ago before being hit with a barrage of lawsuits, can now go do that with more confidence.

"This feels good, because the court is refuting the idea that the visual landscape of the city is just one giant canvas for commercial advertising," said activist Dennis Hathaway of Ban Billboard Blight in an e-mail to LAist.

The plaintiff was Metro Lights LLC who argued that the city could not ban signs while they let contracted companies to advertise on city owned properties and furniture such as bus benches. They called it likened it to"1st Amendment rights to the highest bidder."

The court called bullshit. "This is strong, if rather sloganeering, language, but after reviewing the case law on which Metro Lights relies, we believe it to be little more than a canard," the court wrote.

Of course, the industry could try to appeal again, especially in light that this ruling is "likely to affect billboard regulations across the nation," as the LA Times put it. Hathaway agrees. "Given the willingness of the sign companies to fight every regulation tooth and nail in the courts, it's probably not the end of the story."

And it isn't. Curbed LA has been following SkyTag's numerous supergraphics of Lady Liberty and the phrase 1969 that were put up around Los Angeles last week. Despite city codes regarding murals, Michael McNeilly, the company's founder, told the Times that "the murals of the Statue of Liberty are an artistic and political expression protected by the 1st Amendment."