What to Expect from Waxman 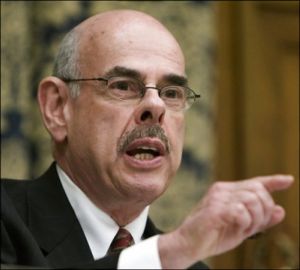 Tomorrow, Los Angeles's own Rep. Henry Waxman will begin his reign as chair of the House Energy and Commerce Committee when Congress inaugurates its 111th session.

Waxman, who bested Detroit Rep. John Dingell in a congressional death match for chair of the powerful committee, faces a daunting shopping list when he is handed the gavel. Exactly what's in store for Waxman, the direction he takes the committee and what that means for California remains to be seen. But that won't stop us from conjecture:

Who is Waxman and how did he scrape the heights of congressional power?

Waxman, 69, is a Los Angeles Democrat and self described "unapologetic liberal." His 30th district includes West Hollywood, Santa Monica and Beverly Hills and he served six years as a state Assemblyman before climbing the congressional ladder. He's also 5-foot 5-inches tall, went to UCLA and has a bad-ass mustache.

He's known as a skilled legislator who can be tenacious, and was once dubbed "the scariest guy in Washington" for his vociferous watch-dog role in which he has never shied away from putting assholes in their place. In 1994, he forced the chief executives of the seven major tobacco companies to swear under oath that nicotine was not addictive after insisting that witnesses appearing before his subcommittee testify under oath, opening them up to the flood gates of perjury. He's also looked into alleged torture at Abu Ghraib, President Bush's alleged misuse of power and other silly, constitution-gutting antics that may have been perpetrated by those wacky Republicans.

How did he best Dingell to lead one of the most powerful congressional committees.

It wasn't easy. Eighty-two year old John Dingell, a Democrat from car-loving Michigan, is the longest-serving member of Congress and had been with the committee for more than 28 years. In February, he will become the longest-serving House member ever in U.S. history.

But with an environmental shift in American politics and consumerism, from Detroit-loving gas guzzlers to smaller, friendlier cars that don't gut the ozone layer or your wallet, it was time for a change. Waxman apparently called Dingell and asked him to retire, because he "thought [he] would be able to bring more energy to the post," he told the New York Times in December.


"I was hoping that he wouldn't run again. He didn't agree with that idea, and I told him that I was going to run for it."[NY Times]

Dingell, however, had other ideas, telling Waxman to fuck off in the most polite way possible: by telling him to fuck off.

There was a last minute attempt to forge a compromise which would have had Dingell announce that it would be his last term as Chairman. But neither Dingell nor challenger Henry Waxman would go for half measures. [NBC]

Michael Corleone bested Don Fanucci and will soon embark on what could be a huge policy shift in Congress and the nation on a committee that will be at the heart of major changes.

What is the Committee on Energy and Commerce and what do they do?

The congressional panel is one of the oldest in American history. Established in 1795, it has been a central figure in landmark legislation that has, for better or for worse depending on your viewpoint, greatly affected the national landscape. Congress originally tasked the committee with overseeing commerce and manufacturing, but soon increased its scope to regulate commerce with states, foreign countries and, for good measure, Native American tribes. 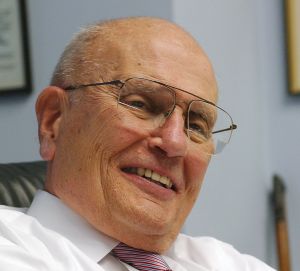 Its name and center of attention went through many iterations since its founding, but the committee's focus had never included energy until 1981, when then-incoming Chairman Dingell (right) expanded the panel's role.

Today, according to its website, the committee enacts: "laws to improve the quality of the air we breathe, to clean up toxic waste sites, to provide health care to senior citizens and children, to protect the safety of our food and drugs, to promote a vibrant telecommunications industry [and] to prevent fraud in our financial markets"

In its 213-year history, the committee has helped provide health benefits to disabled and sick military personnel, enacted the Food, Drug and Cosmetic Act, the Clean Air Act, the Federal Trade Commission Act, and the U.S. Code's Motor Vehicle Safety provisions. Now, the committee could clamp down the auto industry (which Dingell has long represented) with tougher regulations and could enact tougher regulations that the Bush Administration has cut down.

Now that he's the top dog, what is on Waxman's to-do list?

With the upcoming inauguration of President-elect Barack Obama, we are standing on the precipice of what could be major environmental coming down from D.C. As an early backer of Obama and steward of good government, Waxman could behind many of those changes as he and the White House work to green America.

Waxman has already been called upon to launch hearings into last month's environmentally disastrous spill in eastern Tennessee, is likely to push for institutional change at the Federal Communications Commission and could push for greater reform in the world of steroid-plagued sports.

Talking Points Memo wrote late last week that Waxman could make an early name for himself if he looks into the spill of toxic-laden coal ash that was the largest such spill in U.S. History, which dropped a billion gallons into the Tennessee River.

If Henry Waxman wants to make a statement that the time has arrived for a serious debate about the country's energy future, climate change, deregulation, and policy effectiveness, his first act as the new chair of the House Energy and Commerce Committee should be to launch hearings into last month's coal ash spill in eastern Tennessee [TPM].


[W]ill get a chance to draw on those skills as the new chairman of the Energy and Commerce Committee, where he will be a major player on several of President-elect Obama's chief priorities: energy, global warming and health care. Waxman also will have purview over telecommunications policy and is likely to push for institutional change at the Federal Communications Commission.
[CQ]

What does this all mean for California?

When he assumes his position of power, Waxman is expected to lend (even) greater clout to what is already one of the most politically formidable states in the union. Even before Waxman takes his seat atop Energy and Commerce, California boasted some of Congress's most powerful operators, including the Speaker of the House, Rep. Nancy Pelosi from San Francisco; two influential Senators; the head of the House Foreign Affairs in Rep. Howard Berman; and Reps. Adam Schiff and Brad Sherman, who sit on the powerful Appropriations committee and chairs the now-salient Subcommittee on Terrorism, Nonproliferation and Trade, respectively.

Recently, Los Angeles Rep. Hilda Solis was tapped by Obama to be the nation's next Labor Secretary after the president-elect selected Steven Chu, the director of the Lawrence Berkeley National Laboratory, to be his energy secretary. Los Angeles Deputy Mayor Nancy Sutley will head the White House's Council on Environmental Quality, and Phil Schiliro, a longtime spokesperson and aide to Waxman, will serve as Obama's chief liaison to the House and Senate.

Political observes are taking note of the westward swing, which included a late December declaration by Charles Mahtesian on Politico.com, who said, "California is poised to be the top dog in Obama-era Washington."