A ScientIST Christmas: At Least It's Not Crabs! 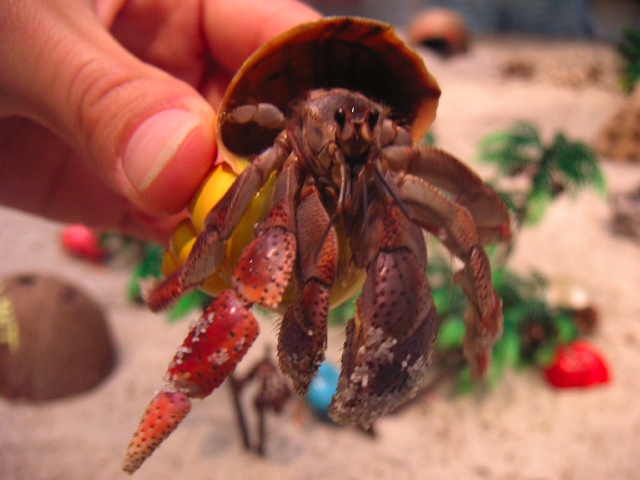 Honestly, at 31 years of age, I'm not afraid of too many things. Those that struck fear in my heart as a child - heights, for instance - have been supplanted by the wondrous world of science. If I'm on the balcony of a holiday party located on the 10th floor and g = 10m/s2, ignoring air resistance, when I fall off because I'm on my third vodka soda (extra lime) and am taking that bet that I can't do a handstand on the edge, then...carry the 2...I'll hit the ground and be dead and likely not feel it. No sense in worrying about heights.

Science has been a protective blanket against the unknown, righting the upturned in my life in a very soothing way. I'm not squeamish when it comes to blood, broken bones, gashes, burns, and discharge. I spent two years interning at a free clinic and a summer in a lab that worked with live HIV. And 8 1/2 years ago, I had a child, which tests your mettle in ways both beautiful and terrifying. Did you know that an 8-lb. baby with a 13 cm diameter head has to actually come out? I do now.

And yet, despite 12 years of rigorous scientific training and a Ph.D. to boot, there is one thing that paralyzes me: PARASITES (intestinal and otherwise).

Did "Alien"/"Invasion of the Body Snatchers"/"C.H.U.D." scar me so deeply that my psyche can't handle being overtaken by an entity whose sole purpose is to live with me, through me, because of me? The strange thing is that I'm fully aware I've got bacteria and fungus keeping things copasetic in my body, a balance so necessary and precarious that I actively consume some of them (yogurt, ahem) to perpetuate their humble existence. But mention a tapeworm and I'll break out in a cold sweat.

You want to know why I really quit eating meat when I was 14? Sure, I was concerned about my carbon footprint, had read Diet for a New America, and cared about animal rights. But if I'm to truly confess, it was because I was afraid of getting food poisoning and vomiting up my bowels. I've puked but six times in my life, and suspect meat products kicked almost all of them off, ending with a stint in the ER and a morphine drip. (Which, incidentally, also makes me vomit.)

So what does this have to do with Christmas, you ask? Two years ago, my daughter got lice over the winter break. You know what category lice falls under? PARASITES. Amidst the goodwill engendered by a Christmas pageant, someone had felt it perfectly acceptable to give 20 1st graders used wool-blend snow beanies and scarves to get into "character". What character? Inmates in a psych ward with poor personal hygiene? And, in an act of piss-poor judgment calls, they let kids trade their beanies and scarves.

Now, if you're not a parent, you probably don't know that lice and children go together like The Captain and Tennille. We all know they're not going to have a fruitful solo career. When your child reaches school age, you remind them not to talk to strangers, take candy from strangers, get in cars with strangers, and wear stranger's headwear. Because that stranger might have lice, and then your child will inevitably give it to you, and because you are in a not-so-nuclear family, it will pass to your boyfriend, your child's biological father, his girlfriend, your parents, your aunts/uncles/cousins on both sides, and the neighbor kids who came for the sleepover. In two weeks. These lice might as well have gotten goddamn drivers licenses and passports as they spent time in Los Angeles, San Diego, San Francisco, and Toronto.

Head lice (Pediculus humanus capitis) are industrious and slutty and have claws. I could bore you with their classification, life cycle, and anatomical structure, but they are GROSS, and therefore I won't do them the honor of an in depth explanation. Lice, you can suck it. But it can't be my head. Been there, done that. In this case, the only powerful knowledge you need is how to kill them (Thanks, CDC!). In general, only those with an active infection should be treated, though there is some belief that prophylaxis is acceptable for those sharing beds and clothing with infected persons.

For the person: Apply OTC (or prescription meds) to a dry head of hair by following the given directions to the letter. They come in a few varieties (pyrethrins, permethrin, malathion, and lindane). Don't rewash your hair for 1-2 days following treatment. Afterwards, comb through the hair with a special comb (they generally are supplied with the medicine) to remove lice and nits (eggs). I speak from personal experience when I say you need to go slowly and under bright light. Pin the hair up and start at the base of the scalp with a small 1" X 1" section. I kept a Tupperware container with hot, soapy water nearby to dip the comb in to drown live lice. Keep moving in 1" X 1" sections until the entire head is covered. Check again 8-12 hours later. If the lice are moving slower or dead, then the medicine is working. Comb again to remove anything you missed the first time around. If the lice are as active as prior to treatment, you're going to need to try a different medicine, so check with your physician. I combed our hair every day, morning and night, for 3 weeks. And 9-10 days after your first treatment, you need to retreat to make sure you've caught those that may have hatched after the first go around.

Although the research on naturopathic products is inconclusive, home remedies (mayonnaise, margarine, olive oil, etc.) have been used with varying degrees of success (and hearsay). Considering that resistance to the traditional drugs is a concern, this might seem like an attractive alternative. But head lice generally do not resolve on their own and (as we have seen) are easily passed between family members, perpetuating their deplorable existence. Thus, if you have additional concerns, please see your physician to discuss non (or less) toxic substitutes that have proven efficacy.

For the house: For clothes, sheets, towels, etc. you can machine wash using hot water (130F) and high heat drying, as lice are killed by exposure to temperatures greater than 128.3F for 5 minutes. For items that can't be washed, you can store them in a plastic bag for 2 weeks. Vacuum floors and furniture, and avoid the sprays as they can transfer to skin and are highly toxic.

In the end, we made it through, and have remained untouched until this year, when we received a letter home stating that "someone" in my daughter's class had been infected. After some Nancy Drew-worthy sleuthing ("Sophia, who was itching and then was pulled from class this week?") we figured it was a student who sits two seats down from my kid. We had a week to go before the Christmas break. It might have been the dry weather, but all of a sudden her and I were itching. I (and my family, friends, and assorted frenemies) couldn't risk another infestation, another take-over by this vile, inhumane creature. We treated, we washed, we bagged, we combed, I homeschooled.