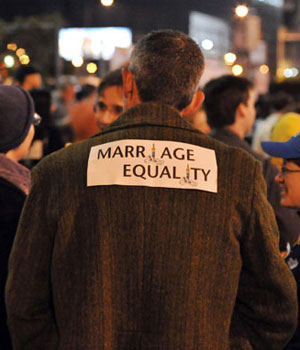 Just two days after Saturday's nationwide candlelight vigil regarding the passing of Proposition 8, which banned gay marriage in California, organizers from Join the Impact announced another cross-county event that will address President-Elect Barack Obama directly, reminding him of a campaign promise made in February.

In that letter from Obama, he told the gay community he supports a complete repeal of the Defense of Marriage Act (DOMA), a promise that is the focal point of the protests planned for January 10. "While some say we should repeal only part of the law, I believe we should get rid of that statute altogether," Obama wrote. "Federal law should not discriminate in any way against gay and lesbian couples, which is precisely what DOMA does."