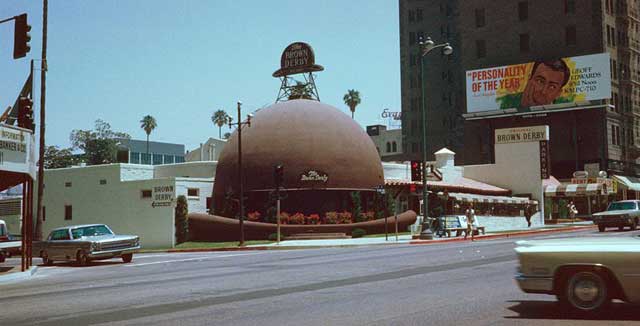 Los Angeles drifts and crumbles under the feet of progress. Gone are the streetcars, the original Schawb's, such hangouts at the Coconut Grove and Chasen's. The Brown Derby was once one of the crown jewels in the LA restaurant scene. There were a number of locations, but there are three that stand out. One was located across the street from the Ambassador Hotel on Wilshire Boulevard (this was the shape of an actual hat), the Los Feliz location and the one located at Hollywood and Vine, known as The Hollywood Brown Derby.

The latter was not the first Brown Derby Restaurant, though it was arguably the most well known. Like Sardi's in New York, it was decorated with caricatures of actors, done by an artist, who will still do one for you, if you pay him. This was the one so well attended by celebrities, where Clarke Gable proposed to Carole Lombard and she accepted, where Louella Parsons and Hedda Harper had their unofficial headquarters, the first place Lucy ate out when they moved the show to Los Angeles. In 1945, the Derby was featured in the film Mildred Pierce. Joan Crawford tended its bar, famously claiming, "People have to drink somewhere. Why not here?"

The original Brown Derby is the one with the famous hat shape. (It was in fact known as "The Little Hat.") Started in 1926, by Herbert Somborn and Bob Cobb. There are a million stories about how it garnered its name, from admiration of a politician, to a similarly named restaurant in Long Island, to someone saying that if you know enough about food, you can sell it out of a hat! Just across the street from the Ambassador Hotel, it was the site of many of the Coconut Grove after-parties. It was here that Bob Cobb invented the Cobb salad, digging through the refrigerator for a snack for himself and some famous friends. (Jack Warner and Sid Grauman, among others were allegedly in attendance.) 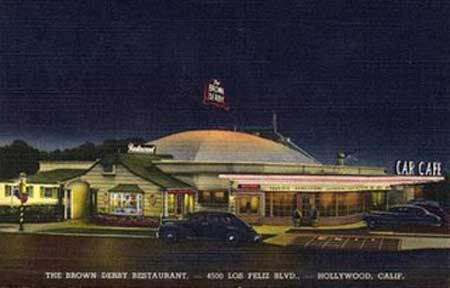 It's the Los Feliz Derby that's mostly extant. It was built in 1928 as Willard's Chicken Inn restaurant. It was financed by Cecil B. DeMille and designed by Wayne McAllister. Though an influential architect, (he created many of the drive-ins and car hops so popular in the mid-century, including Bob's Big Boy in Toluca Lake) few remain. Its curious dome shape made it possible to pump water up through the building and out the the roof so that it ran down the sides. This effectively cooled the interior, making it one of the first "air conditioned" restaurants.

In 1940, its name changed to the Brown Derby and remained distinctive because of its design and its car-hop service. In 1960, it became Michael's and more recently, the car hop area has been a Louise's Trattoria and the dome has been called the Derby, a vintage club for swing dancing. In June 2004, the site was bought by Richard Hadler of Los Feliz/Hillhurst LLC who wanted to demolish this gem of Hollywood history, in some ways the last of its kind, to erect a huge condo/retail complex (certainly no boon to small, village-y Los Feliz). 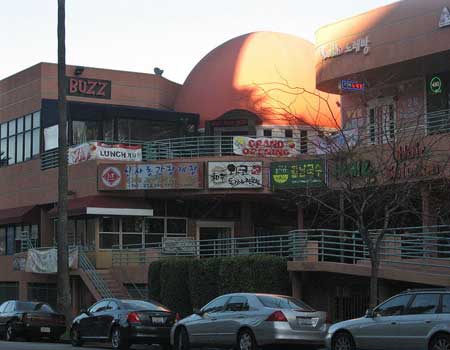 A group of people started a movement to save the Derby in 2004, and in May of 2006, the Los Angeles City Council voted to have it made an official Historic Cultural Monument of the City of Los Angeles.

Other Derbies did not fare as well. The Hollywood Derby, located at Hollywood and Vine (1628 Vine Street), where celebrities gathered to eat Cobb Salad and Chiffon Pie (also an original dish) survived until 2001. There were plans for an apartment building, but right now, it's just a vacant lot. The original Brown Derby (3377 Wilshire Boulevard) closed and was quickly dismantled in 1985. The round part of its hat persists in the same location as part of a Korean mini-mall. Though you can see a band at the Derby, or drive past what's left of the hat, they are shadows of what they were. It shouldn't be surprising. Los Angeles is a place that burns its past and then cries about it. Our vaunted places places only last so long before, like last month's starlet, they are forgotten.

Photos from Wikipedia, except for Postcard of the Los Feliz Derby.