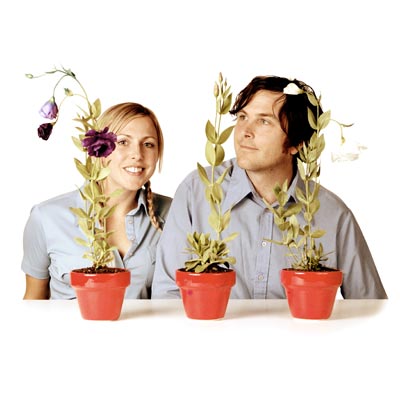 John Dragonetti and Blake Hazard never intended to form the Submarines. They had met in Boston through mutual friends when they were both playing in separate bands. They became a couple, moved to LA, and promptly broke up.

After their break up each of them began to write songs about how the break up had affected them. They still shared the same studio space, and eventually got to hear each others songs. Blake and John decided that the two sets of break up songs which told both sides of the story would make an excellent album.

They got back together, got married, and released the album Declare A New State! as the Submarines. Three years later they have released their second disk Honeysuckle Weeks, to high critical acclaim, and are still going strong. The Submarines will be playing at the Echo this Friday as they wrap up their US tour. John Dragonetti was kind enough to speak with us over the weekend:

Does the name Submarines have any significance?

You’d probably get a different answer from Blake, but really we just thought it was a catchy name. But I guess it has some significance in that when we first met we watched the German submarine movie Das Boot . So I guess we were destined to be submarines.

Is your band a dictatorship or a democracy?

Can there be a dual dictatorship? We’re both strongmen of the relationship. A lot of times we write stuff independently and then edit a lot when we come together. So really we go through the whole political spectrum. It starts out like a dictatorship and ends up in sort of a social democracy.

Is there a method to your writing?

We don’t have a set thing. Blake tends to work more as a songwriter would with a guitar. I’m usually in the studio every day, messing around with toys. You know making sounds that might end up as songs if Blake is inspired by it.

What is your favorite venue to play at in LA?

Well when we’re headlining, we really like playing at the Echo. But when we’re supporting other people, we had some really nice shows at the Wiltern.

Who wrote You, Me, and the Bourgeoisie?

Blake did. She wrote the song structure and the lyrics. I added the piano bits at the beginning and the other additional noises.

Is it weird having a song that is so politically charged on an Apple commercial?

It is really ironic that it’s used to sell stuff. I mean, it’s not bad stuff. I use Apple computers. They’re really nice. It’s not like Hummer or something really horrible. We really thought hard about it though, when Apple came to us. I think if you should also consider how your music is going to be used. It was really good for us, though. We’re not a band that gets to be on the radio that often. The iPod commercial changed that. 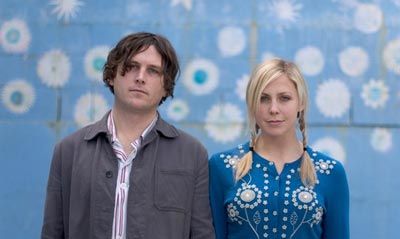 Do you have any advice for struggling LA bands who are just starting out?

(Laughs) Never move to LA to be in a band. Young bands put up with all kinds of crap just to be heard. Like the pay to play clubs. Fortunately the Submarines happened in the sensible stage of my career. I’m not going to put up with some of the crap that I would have when I was younger. But you know, management and booking agents makes those incidents less likely. I would say to young bands starting out to stand up for yourself and not take and shit from promoters . I mean you’re already living in vans and living on floors, you don’t need more crazy crap.

What made you pick up an instrument?

I think for me it was Hard Day’s Night. I saw that movie when I was a little kid and thought, “Ok, that’s what I want to do.” Growing up my dad played guitar and my mother’s brother was a long haired hippy guitarist, who I thought was really cool. Then I discovered KISS and I thought that that no one could be as good as them. I swore that I would only listen to their records.

Your poor parents, when did the KISS phase wear off?

I’m not sure. I grew up in Dubai and at the time you could buy cassettes for like buck. I would walk around with like ten dollars and be able to buy all this music. But I bought a lot of them based on the album artwork. I remember seeing the album cover for There Will Be Blood by ACDC. That album has a guitarist stabbing himself with the guitar. I think that’s the moment KISS became less important. Also around that time my good friend moved to Dubai and his brother introduced me to punk rock, specifically the Sex Pistols and the Specials. That guy changed my life.

Is it weird playing songs about your break up with your wife?

You know it depends on your mood at the moment you’re playing. Sometimes you can tap into those emotions that night and think, “Holy shit, this is new again.” But usually I feel pretty removed from it. Which is too bad. You want to be able to tap into the feeling you had when you wrote your song when you perform. It’s weird. It was almost harder to tap into when we playing it all the time, then it is now.

You and Blake share lead vocals on most of the record. Do you ever fight over who gets to sing a song?

Not really. Whoever has written the song usually sings it. But lately I’ve writing a lot of songs for Blake. I think she has a better voice, and you know you should always play to your better strength.

Does Blake know that you’ve designated her the singer?

(Laughs) She’ll find out when she reads this! 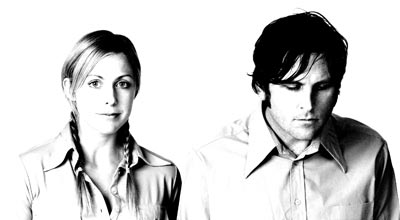 Do you ever get sick of each other? I mean I talk to bands who tour all the time and then need sometime apart. You guys are together all the time.

We’re working on not being together so much. It can be really challenging to be in a band in with your partner. However it’s great that we get to experience touring together. Usually the significant other is at home and your home on the road. But yeah it’s hard. We’re playing with a third person now so we’ve got a triangle conversation which is great. It’s really important to have your space, which is hard to do that when you’re stuck in a van. After this tour though, Blake’s going to work on her solo project. We have actually question whether the band destroying our relationship. I mean, if we ever sense that happening, we’ll quit the band. I actually think that one more record will do the trick.

Where did you write Xavia?

I don’t know. It was just sort of a piece of music, instrumental. A lot times when I sang it at the beginning I would just mumble total nonsense. I don’t know why Xavia was the name I picked. It just sort of appeared. I googled the name and it seems only one person has it, this gothic kid in New Jersey.

I like recording more. I like being in the studio and playing with my toys. (laughs) It’s funny at the beginning of the summer said, “I’m not going to tour that much.” And somehow we’ve been touring ever since.

What is the worst show you ever played?

Our very first show ever as the Submarines. We had made this album, but weren’t really a band yet. Our record label told us, “Ok you guys are going to do South by Southwest.” So we packed up the van, brought people in we didn’t even know, and figured we’d just work through it together. It was awful. It didn’t sound like anything I wanted it to. But you know w e rarely feel like everyone had a great show. Usually one of us thinks that they sucked. We’re perfectionists.

So when are we going to be hearing another album from you guys?

I’m pretty excited about the things that we’re writing right now. December will be a good month for us. We’ll be able to relax and start writing again. However, the idea of creating another record is really daunting right now.

Check out the Submarines for their homecoming show this Friday at the Echo!

These photos were taken by the talented Orrin Anderson.