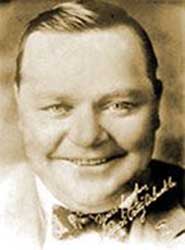 Roscoe "Fatty" Arbuckle had the dubious distinction of being the movie business' first scandal. Born in Kansas in 1887, Roscoe Arbuckle (who only used the name "Fatty" professionally, and otherwise detested it) was catapulted to fame in Mack Sennett's Keystone Cops movies. He made famous the "pie in the face" gag so familiar to many of us. For a larger gentleman, he was an astonishingly graceful tumbler, and was said to have a lovely singing voice. Opera singer Enrico Caruso told him, "with training you could become the second greatest singer in the world." The first, presumably, being himself. He mentored both Charlie Chaplin and Buster Keaton.

Though he married, he was known about town as a man of huge appetites, in booze, partying and women. Nonetheless, he managed to, at the height of his career, scandalize the nation by being involved in the death of a young actress (and we use the word "actress" here loosely) named Virginia Rappe. It was Labor Day weekend 1921, Arbuckle was to be found partying down and living it up in San Fransisco's St. Francis Hotel. The young woman was known to be sickly, and have a number of issues when using alcohol. When she was found moaning and barely conscious, she was hospitalized, dying shortly thereafter from a ruptured bladder.

A rumor was started that Arbuckle had crushed her while trying to rape her. (In fact it's thought that she was suffering from a botched abortion.) The Hearst papers ran with the sensational story. The DA, Matthew Brady, wanted to run for governor off this case. He pressured witnesses to perjure themselves. The case was tried three times, the first two resulted in a mistrial. By the time they reached the third, most of the prosecution's witnesses had recanted their statements. The jury returned a not-guilty verdict and a written apology to Arbuckle. 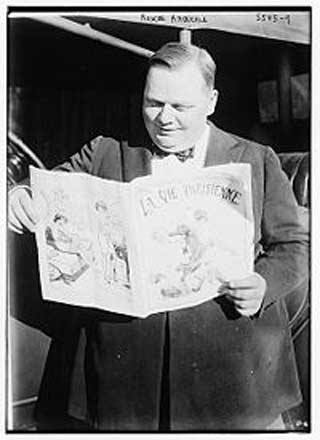 In 1932, there was talk of a comeback. Arbuckle made some comedy shorts for Warner Brothers. They were successful. On June 28th, 1932, Warners signed him for a full length feature. That night, he died of a heart attack. He was 46. He was cremated and scattered over the Pacific Ocean.

Arbuckle's story is one of the dangers of excess, whether the pleasures of the flesh and drink, or ambition and greed. As much as he was a perpetrator of many, he was the victim of others. Now we have whole industries dedicated to following the famous around, waiting for the least little fallibility. We've become more interested in their lives than the strength of the creative projects they contribute to, to the detriment of both them and ourselves. We should think on Arbuckle the next time a scandal threatens to pull us in. Despite his turning of a new page, Buster Keaton, his lifelong friend said that Roscoe Arbuckle died of a broken heart.