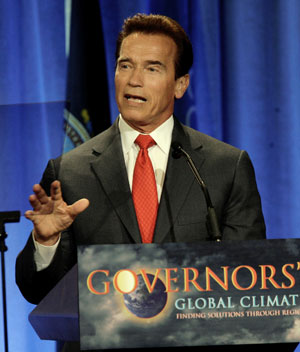 Governor Arnold Schwarzenegger was named the villainous winner of the 2008 Heroes & Villains Face-Off in the just-released Holiday issue of Field & Stream magazine. His faults were closing state recreation areas in the midst of budget cuts while taking away funding for steelhead and salmon restorations. Then again, the magazine also named Alaska Governor Sarah Palin as a hero for being an active hunter and fisherman.

But we saw the other side of Schwarzenegger this past week in Los Angeles when he took bold steps to create the first Governors' Climate Summit. The representatives included leaders from the U.S., Australia, Brazil, China, India and many more with agenda topics such as standardizing reporting on global warming, panels on concrete and steel, and sectoral cooperation to combat climate change. The conference got media attention with President-Elect Obama's introductory message supporting change in the U.S. policy. However, the action that may be the most significant is getting the littlest of attention: the signing of the Summit Declaration.

In the declaration, leaders from across the world committed to an "extensive list of principles and priorities, proclaiming, in effect, that they were not willing to wait on national leaders to begin the fight against climate change and the quest for clean, green economic development."

Many have noted that the characteristic of this summit, different than others, is that instead of talking about change, these leaders were participating in change, signifying that waiting period is over. Many thanks to our governor for initiating this meeting.