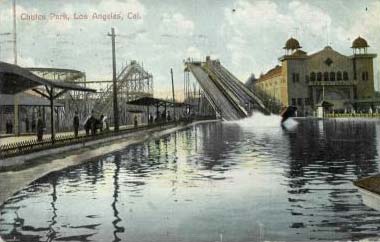 Downtown Los Angeles has been going through a massive period of renewal and development over the last several years in what can be thought of as an attempt to revive what was once the true core of our city. From high rise high-end condos and lofts to the entertainment "campus" of LA Live, there are more reasons now than in recent memory to live or visit Downtown.

However, if we flip through the pages of history, we'll notice that Downtown was designed as not only a place to live, but also as a place to visit. Once upon a time, one of the biggest draws to the area was actually a 35-acre amusement park right in the heart of what was soon to become one of the most important cities on the West Coast.

Chutes Park (and later called Luna Park) occupied the area bounded by Grand Avenue and Main Street to the west and east, and Washington Boulevard and 21st Street to the north and south. From 1899 to 1914, rides, animals, theaters, and a ballpark, brought people together right in the middle of Los Angeles.

The land that would become Chutes Park first had fruit grower John Lang's 1873 Sulphur Springs Hotel. It was purchased by David V. Waldron in 1887, who "made a business arrangement to establish a horse-drawn rail line to connect to the city streetcar lines because the location was outside of the Los Angeles city limits. He began weekly variety shows in a small pavilion, brought in animals for display, and planted an orange grove" (Wiki). Waldron, however, wasn't particularly successful in maintaining or promoting the park (which seems to have gone by the name Washington Gardens), and by the 1890s it was in decline. In 1899, the Los Angeles Improvement Company took out a long-term lease on the property, and by the following summer revealed their plans to build an amusement park there. [For a more detailed account of Waldron's enterprise, the LA Downtown News has an excellent article about Chutes Park and its early years as Washington Gardens.]

At the core of the park would be a major ride, which was called Shoot the Chutes. This was Paul Boyton's take on the ride, which had been installed back east at Coney Island's Sea Lion Park in 1895 and was much heralded. It was a ride where flat-bottomed toboggan-style boats would slide down a 300-foot ramp into a small (50x150') lake. This ride began to crop up at amusement parks all over the nation at the turn of the century, and modern variations--log rides, flume rides--are still extremely popular today. 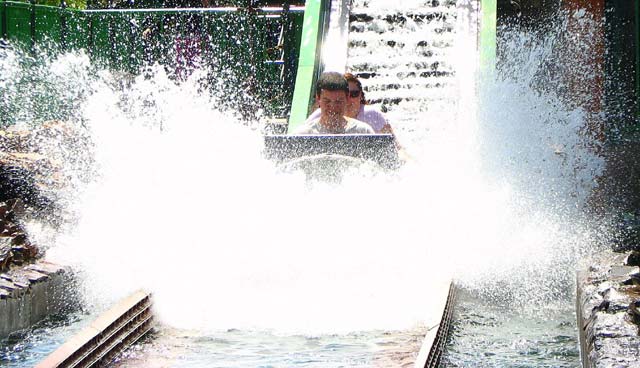 Virtually no photos exist of Chutes Park, but the USC Digital Archives has a 1906 photo of the ride viewable online with the following description:

A man and two women stand in the foreground near a fountain situated near the edge of a pool. On the other end of the pool is a tall slide about 30 feet tall with water trickling down. Next to the slide is a mechanical lift, which is used to carry thrill-seekers to the top of the slide. On the outer edges of the pool are benches where people can be seen seated or walking by. At left are the circular and winding tracks of a roller coaster. The sign at the ticket booth reads: "Tickets 10¢, children 5¢". There are several signs on the roller coaster tracks that read: "danger, don't stand up"

But there were other rides and attractions, described in an online article by Jeffrey Stanton as "a Merry-go-round, Japanese Village and Tea House, Shooting Gallery, Bowling Alleys, Children's playground with pony and goat carts, Zoological Building, Modern Theater, Baseball and Football Field, picnic grounds and a restaurant." It would cost ten cents to get in, and the ticket included one trip on the Shoot the Chutes ride.

The park was open for business in the fall of 1900, but just a few months later shut down so that more attractions could be added. Stanton explains the changes that took place:

The owners added the 1400-seat Chutes Theater for vaudeville shows, and enlarged the zoo; both at a cost of $35,000. The zoo featured boxing bears, three African lions, a sea lion and its mate, and a blood-sucking vampire bat. Along its main walk, called the Midway, were games like the fishing pond, which offered prizes for successful catches, and an area where circus acts, like Lunette - The Flying Venus, performed daily. There was additional free entertainment like daily balloon ascensions and the Catalina Marine Band. A miniature railroad took visitors for a tour of the entire park.

According to the Downtown News, Chutes Park enjoyed tremendous popularity in its new incarnation: “A newspaper article from September 1901 said 7,000 people had visited the park on Labor Day.” The park continued to expand in the following years, and in 1903 there was yet another expansion with a $40,000 price tag that brought in a “figure-eight” design roller coaster that would replace the hot air balloon rides on the south side of the park. Plans included a Steeplechase ride, but it is unclear according to various reports if that particular ride was ever built.

Four years later another renovation took place, which solidified the park’s attractions and overall appearance for the next few years until the next major phase came. The Downtown News explains:

It was surrounded by a 10-foot wooden fence. In addition to the major rides, it had animal pens, including a seal pond; the two-story Chutes Restaurant; a cigar store; a dancing school and skating park; a billiards hall; and a photo studio.

Another new attraction was a miniature railroad about 425 feet long by 200 feet wide. Inside the track were a fountain, a small pond with an animal enclosure and a Japanese restaurant.

Other features were more esoteric. There was Tony Ryder's Monkey Circus, Sheik Hadji Tahar's Famous Arabian Horsemen, Billikin's Temple of Mirth, the Cave of the Winds, in which those who entered met sudden gusts of wind, and - building on the theme established with the Battle of Gettysburg years earlier - a panorama which offered a daily reenactment of the Civil War sea battle of the Monitor and the Merrimac.

It is hard to discern, besides some scant reporting, just how popular the park was, who went there, and how profitable it was. Because the park was also home to a baseball field that hosted the Vernon Tigers and the Los Angeles most of the attention was focused on the sporting aspect. Stanton elaborates: “Most newspaper accounts were about the semi-pro Los Angeles baseball team that used the field during the spring / summer seasons.” After those games, the fence in center field would be opened up, and ballpark patrons could go into the theme park.

What does seem to be evident, however, was that by 1910 the park was not doing as well as hoped. The Downtown News explains that “faltering gate receipts prompted the sale of the park to new owners in October 1910. They promised to spend $200,000 - about $4 million today - to upgrade the park and add new attractions.”

The centerpiece of the new plans was a ride called “Nemo’s Trip to Slumberland” which was designed by the J.D. Thompson/Snow Co. Stanton describes the ride as:

an enormous $75,000 scenic railroad based on the popular and imaginative comic strip of a boy's dream adventures […] that ran the entire Main Street length of the park, and occupied a space 600 feet long by 75 feet wide. Its use of an electrically-powered third-rail allowed it to run three trains simultaneously as each train's operator could control the speed of his train as it climbed or descended, even accelerating downhill. While one train was 100 feet above the ground passing dark abysses and unscalable precipices, another was dipping through panorama-lined tunnels underground.

The figure-eight roller coaster would remain, but Shoot the Chutes was to be remodeled into a more “scenic” rapids-riding attraction.

Without the “Chutes” there could be no “Chutes Park” and so the place was renamed Luna Park, and opened on June 10, 1911. 16,000 people were there on opening day, and once all 24 attractions, the vaudeville shows, and the circus performances were in full-swing, the weekend crowds swelled to 30,000, with the longest lines seen at the Nemo ride, according to Stanton.

Despite what seems to be a great popularity, Luna Park was short-lived. In 1912, the park was sold to someone who wished to develop the park as an place exclusive to African-Americans. This development never took place, however. By 1914 the grounds had been completely turned over to David Horsley, who operated a zoo on the site, and all the rides, buildings, and attractions were demolished. At this phase, the land was known as Horsley Park, although it is unclear how long the enterprise was in place.

What did remain, however, was the ballpark, which was probably more frequently referred to as Washington Park post-1912. There the Los Angeles Angels of the California League remained the biggest baseball franchise in town, until they moved in 1925 to Wrigley Field in South Los Angeles.

So what’s there now? Well, the LA Mart has been on the property for over 50 years now, and what was once the grounds of Washington Gardens, Chutes Park, Luna Park, and Horsley Park is now another kind of park altogether: A parking lot.