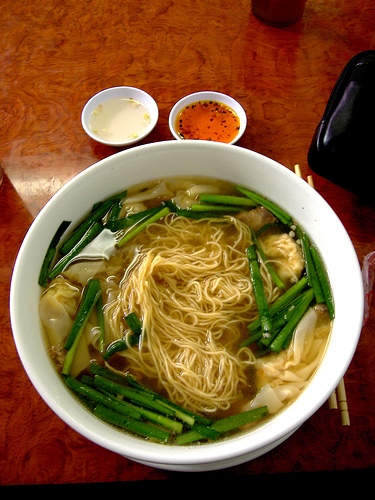 As the saying goes, “Mom knows best”. This is especially true when we’re under the weather, and though there are but few PTA members with legit science and medical degrees, it seems like most Moms could whip up an acute care clinic from the trunk of their Volvo if pressed. We turn to them for tummy aches and acne, scrapes and sunburns, chickenpox and colds (and nearly everything in between), and though their specialized mixture of Eastern and Western medicine comes with Care Bear band aids and kisses, it’s quite possible that hand me down remedies work because they’ve got some serious science behind them. Thus, in homage to Moms everywhere, we bring you this special ScientIST segment – Dr. Mom Knows Best – to reveal the truth behind the folklore.

Nothing says “cold weather remedy” like chicken soup, whose broth-y goodness has been leading the charge on comfort foods for generations. But does it really have a role in banishing upper respiratory infections, as posited by Jewish physician and philosopher Moses Maimonides in the 12th century (and Jewish grandmothers ever since)? Scientists at Nebraska’s Pulmonary and Critical Care Medicine Section thought this was worthy of scientific inquiry, so they devised a series of experiments to determine if chicken soup could halt a part of the inflammation response, an essential component to the symptoms associated with the common cold infection.

The basic materials and methods of the experiment were as follows: Traditional chicken matzoh ball soup (affectionately titled "Grandma's soup" by the researchers) was the benchmark and prepared as directed. In order to determine the stage in which the soup became active against inflammation, fractions of the soup were collected throughout the preparation and tested for activity. Likewise, to ferret out the particular key contributors, each soup component (vegetables and chicken) was individually boiled, with the resulting broth saved for testing. Furthermore, the researchers were interested in finding out if the medicinal properties were equally contained in the broth or the chunky version, so a strained batch was prepared.

What did all this fancy work reveal? Chicken soup, as measured by their assay, was able to inhibit a telltale element of inflammation. These positive results persisted whether the soup was clarified or used whole, so if you'd prefer to just sip the broth, you're likely to gain similar benefits as those asking for double helpings of matzoh balls. Interestingly, it appeared that the advantage conferred by the soup required all the ingredients, as samples taken from the early stages of the soup preparation (those with chicken broth alone and before vegetables were added), lacked activity. However, all ingredients, when tested individually, had inhibitory properties, including the boiled chicken leg. While these contradictory results mean that the active ingredient remains elusive, you can leave that dilemma to those in the white coats and just enjoy the real deal. (It probably tastes better than boiled parsnips, anyway.)

For those of us more challenged in the kitchen (or too sick to navigate Whole Foods), researchers also tested store bought canned chicken soup to see if it had similar inhibitory properties. As it turns out, ramen noodles were not active in this assay (Attention college students everywhere: Honestly. You can do better.). Among the winners were Knorr's Chicken Flavor Chicken Noodle, Campbell's Home Cookin' Chicken Vegetable and Healthy Request Chicken Noodle, and my personal on-a-budget favorite, Lipton Cup-o-Soup, Chicken Noodle. But let's face it. This is Los Angeles, folks. If you don't know where the nearest Jewish deli is to your home, chances are you've bigger problems than a runny nose. Canter's, Langer's, and Greenblatt's (feel free to put in your favorite suggestions and/or recipes in the comments section) are all home to some rhinovirus-kicking chicken soup, so whip out that iPhone and make it happen.

In general, chicken soup may work in a variety of ways to alleviate symptoms, be it through inhibiting inflammation, raising the temperature of the nasal passages and thereby loosening mucous, increased hydration and nutrition, or even the placebo effect. Regardless of the method, chicken soup, in concert with the simple act (and lost art) of being taken care of, gets the job done. And those are results even a scientist can support.

Photo by ~db~ via the LAist Featured Photos pool on Flickr