A Call for the End of Irony 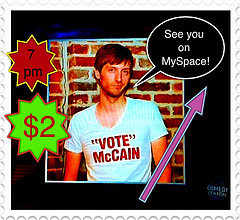 Today's L.A. Times has an article about a new bar in Silver Lake that's - guess what? No, go ahead and guess, you're going to be so surprised - ironic!! Isn't that awesome?? I love it!

The bar is called Stinkers, and according to the Times it's got a picture of Burt Reynolds in the ladies room, a "cornucopia of vintage bumper stickers," and "brazenly kitschy delights" like fake stuffed skunks and - wait for it - pull-tab beer cans. Oh, what a throwback!

OK, but seriously - am I the only one who is completely, 110% over this? The Times describes the bar as "post-post-irony," which, if you do the math, means that irony went away and came back. Did I miss some blissful period of time in which irony took a much-needed vacation? WTF? Why didn't anyone tell me? Well, I suspect that it's actually because that never happened. Rather, this bar is yet another commodity in a very, very long line of ironic commercialization that began with $70 t-shirts and that now bleeds unsuspecting hipsters dry of their hard-earned paychecks.

The true irony here lies in the fact that the people who will go to Stinkers and comment on how "amazing" and "awesome" it is in deadpan mock-seriousness are being completely had. From my understanding, the whole "irony" thing started with the Dave Eggers of the world, people who are so painfully, profoundly self-aware (some may say narcissistic, but that's neither here nor there) that they can't even express emotion without being self-depricating. But can one be painfully self-aware and yet still feel the overwhelming urge to drink in a bar solely because it's overdone decor affirms one's self-perception? That doesn't seem right...

Bobby Green, the owner of the bar, manages to carry the irony even further, when later in the article he fails to realize that he didn't think of Burt Reynolds as a symbol of ironic hipsterdom first. "I despise the myriad Buddha-head, martini-drinking, glossed-over bars in L.A.," he says. Really? Because this Stinkers place seems so familiar also... oh that's right, 1970's ironic throwbacks smack me in the face every time I walk down the street in Silver Lake. Yes, my wealthy, pandering, entrepreneurial friend, conformity is conformity whether your skinny jeans are J Brand or vintage.

Anyway, this irony thing is now just tripping over itself. We're becoming a generation (and yes, full disclosure: this is my generation) that's so judgmental and defensive that all we can safely do is mock, and we can't even do that originally. We can only mock a symbol that we've all silently agreed upon beforehand (tough break, Burt). What happened? When did we get so unoriginal, and so fucking annoying?

Are we pissed because the generation before us will go down in history as being way more original than us? Are we tossing off the burden of being children of 60's and 70's activists - people who stood up to stuff, whereas we've sat by and let our country go to shit - by mocking everything that reminds us of them? Or are we just being brats? Hmm....fascinating.

I'd like to think that our recent political activity, from Prop 8 rallies to Obama's entire campaign, symbolizes the end of the ironic era. Maybe as we realize that action - real, passionate, vulnerable action - is actually kind of cool, irony will finally, finally go out of style.

Someone should probably let the bar owners know.