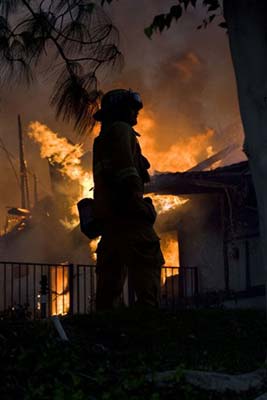 The fire that broke out Saturday in Corona near Green River Road and the 91 Riverside Freeway has now been dubbed the "Freeway Complex" fire or the "Triangle Freeway" fire because of the broad stretch of land in three counties—Riverside (Corona), Orange (Yorba Linda, Anaheim Hills), and San Bernardino (Chino Hills)—in which it is blazing. A fire in nearby Brea is being connected to this fire, and now threatens the neighboring community of Diamond Bar, which would then involve a fourth county, Los Angeles.

According to an Orange County Fire authority, as of early this morning "at least 104 residences in 64 buildings have been burned in the fire" (cbs2.com). The fire has burned close to 10, 500 acres, and containment is at only 5%. An estimated 40,000 residents have been evacuated from multiple areas and are using area community centers and high schools as temporary shelters.

Last night, Governor Arnold Schwarzenegger "declared a state of emergency in Orange and Riverside counties about 9:45 p.m. Saturday, is scheduled to visit the burn area at 11 a.m." today. Today's weather is expected to continue to be hot, dry, and windy.