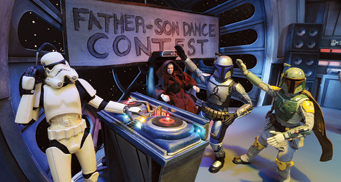 Fans of Adult Swim's "Robot Chicken" have been eagerly anticipating this Sunday's premiere of "Star Wars: Episode II" at 11:30pm. Known as "TV for those with ADD", this brainchild of Seth Green and Matthew Senreich broadcast the first "Star Wars" special in June of 2007. This time they've recruited Billy Dee Williams, Carrie Fisher, Ahmed Best (Jar Jar Binks), Conan O'Brien, and many more to provide voices for the myriad of characters.

The series, now in the midst of its 4th season, also recently released "Robot Chicken: Season Three", which features several instant classics, such as: a "24" spoof featuring Dracula, "The Shield"'s Vic Mackey (voiced by Michael Chiklis), and a 100% chicken version of "Law & Order".

LAist miraculously scored an interview with series writer and longtime provider of many voices in the show, Breckin Meyer. Meyer was headed to Northern California to screen the special for Lucasfilm employees, including George Lucas.

As stated previously, Meyer does a lot of voices on the show, but the killer role, the key one, is his voicing of the ultra-cool Boba Fett. Meyer has every kid's dream job, hands down.

Listen to the complete interview with Breckin Meyer:


LAist: So you're going to be screening the special for a bunch of folks from George Lucas' various enterprises. We understand that they are fans of your "Star Wars" efforts so far.

Breckin Meyer: Yes, they seem to be, they were pretty happy with some of the sketches we did and that allowed us to do the first "Star Wars" special and they basically coproduced it with us. They gave us access to the libraries for sound effects and stuff like that and George was even in a sketch or two in the first special, Seth actually directed George in the booth at one point.

"Star Wars: Episode II" is more of a linear story than the first one, which was a collection of sketches. This one is more focusing on the bounty hunters, and how you even go about hiring a bounty hunter, how you find them, the internal monologues of certain bounty hunters, and it focuses a lot on the Emperor as well.

LAist: Can you tell us some of the characters you have provided voices for in "Robot Chicken"?

Breckin Meyer: In the special, I have the awesome good fortune of doing Boba Fett, and I do Admiral Ackbar, random Jedi's and what not. My favorite stuff I do on the show are the girls, Seth and I do the Bush daughters, we do Jenna and Barbara Bush, I do Nicole Richie and Lindsay Lohan.

This season we have a rare thing we do, we do a take-off of "Living Lohan", and it's got Dena, Allie, and Lindsay, all badly voiced by me, and the only other person in that sketch is a guy named Munson, who's a schoolyard bully, he's also coincidentally voiced by me, so it's basically a one man show in that sketch.

"Robot Chicken" allows me to do stuff that I would never get to do in front of the camera, meaning I get to play Boba Fett, I get to play Admiral Ackbar, I play Superman on our show, I play Jesus Christ, which is a stretch, and various superheroes as well.

What I like about the special though, is that there's a storyline throughout, it's got a lot of fun stuff, but we tailored it so that it tracked instead of being just a bunch of sketches. It just kind of came about, we all started doing a lot of Boba Fett and a lot of bounty hunter sketches and a lot of Emperor sketches. Two of the sketches that were fan favorites from the first special were the Emperor phone call sketch, and the Boba Fett sketch. It's always fun to write for Boba Fett because he's the coolest man on the planet and the Emperor is the grumpiest man on the planet [universe!]. Having written the Emperor sketch, I was very proud that it was such a fan favorite. I was kind of giddy that it was received so well.

LAist: It's so amazing because Boba Fett was such a minor character.

Breckin Meyer: If George knew how big that guy was going to be he never would have killed him off in the Sarlak pit, which is something we address on the show. It's the same thing with Darth Maul in the later movie, he's the coolest character George created in 15 years, and he gets split in half by Rob Roy, and you're like "that's it?? I'm not going to see him again??!!"

Boba Fett has become the coolest character in movies. He's a badass! When I got to voice him I was very very excited. We have one sketch, I believe it's called "The Greatest Sketch Ever Written", and I don't want to give too much away, but it's basically: what if Boba Fett hadn't died, and what if Boba Fett ruled? It's the exact sketch every fan boy ever wanted to see.

[Listen to the podcast to hear more about the special and series! "Robot Chicken: Star Wars Episode II" airs on Sunday at 11:30pm]