The Folly of the No on 8 Groups 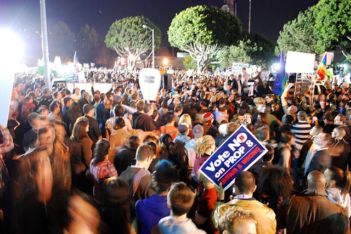 Hours after officials conferred the presidency upon Barack Obama, an agent of change in what could be a new era of American politics, millions around the state celebrated the win with a bittersweet tinge, recognizing that a majority of voters had dismissed the right of same-sex couples to marry.

The loss of Proposition 8 set off a frenzied spate of rallies across Los Angeles and other parts of the state where outraged gays and straights decried what they viewed as the hateful result. Images of blocked off streets, of activists atop cop cars, of sign waving, slogan chanting crowds were beamed across the nation as an example of mass antipathy.

But it was too late and so much more could have been done.

Prop. 8 had passed in California by a four-point margin (and by a in Los Angeles) on the strength of an incredible marketing campaign by religious groups bent on denying equal rights to a minority of citizens. Advertisements showed parents fearful their children would be forced to learn of gay marriage in schools, happy looking political placards bathed in yellow asked voters to "protect" marriage while church groups across the state slyly told its parishioners to not turn their back on moral duties.

Meanwhile, the No on 8 groups were outspent, outplayed and out-hustled. They put out signs in dark blue and blood red telling people a vote for banning gay marriage was "unfair and wrong" and put out some mysterious commercials about gay marriage. But where were the protests we see today? Where was the strong language of the streets in newspapers and on TV now? Where was the grassroots movement when it was needed most? 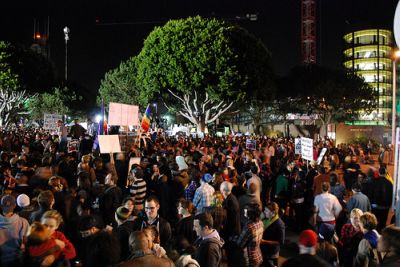 Most voters are not familiar with the minutiae of ballot propositions. It's not their fault; the measures are written by a gaggle of lawyers to ensure that no legal holes can found to invalidate its language should opposition groups loft a challenge. One of the reasons why Proposition 7 failed was because opponents claimed it was poorly written.

Because most propositions are confusing, voters rely on others to explain the measure via educational outlets that strive to provide a balanced approach (ahem, LAist) while others get their info from biased commercials.

If ideas are the most important part of a political campaign ("Change", "Fear" "Don't let gays run wild with our rights," etc) money is a quick second. Obama's resounding victory wasn't just because he tapped into our desire for a more hopeful America, but because he outspent McCain in a dramatic fashion. Obama opened up campaign offices in places Democrats have no business being and stayed on point with his message during the entire process.

But the no on 8 groups lacked a coherent message throughout the campaign. First it was for equal rights, then they shifted the conversation (rightly so) to talk about Prop 8 in terms of the civl rights struggle.

Admittedly, the No on 8 groups faced an uphill battle from the start, but their lack of a consistent message, soft language and virtually no grassroots movement ultimately doomed the campaign. What could they have done?

1)All of those out in full force now, rightly protesting their recently stripped right to marry, where were they weeks ago? The grassroots outrage is clearly there, it just needed to be tapped into and it was not. There were spotty demonstrations around the state of a small band of those devoted to the cause, but nothing like we see now. The success of the future of gay marriage will depend not on the top-down No on 8 groups, but the grassroots movement that said Fuck it, I can mobilize myself. Have they learned nothing from Obama's campaign?

2)The language of the No no 8 groups was too soft. Those signs that decried Prop 8 was “wrong and unfair” were absolutely correct. They just didn't go far enough. They should have framed the language in drastically bitingly terms that in no uncertain language made voters realize what they were voting for. If someone calls you unfair or wrong, it might not be as much of a slight if they were to call you a hateful bigot. Prop 8, all things being equal, was essentially a measure to further subjugate a segment of the population. Voters needed to know that Prop 8 was not just unfair and not just wrong, but that it was bigoted, hateful and spiteful. A vote for Prop 8 was a vote for hate, and I don't think enough people realized that.

3)Just as the Yes on 8 groups rolled out a whole band of clergy behind their cause, the no groups should have trotted out like minded priests, rabbis and other religious folks to speak about equality and how we are all supposedly equal in the eyes of God. The no groups seemed to shun the religious equation and were handily outmaneuvered by the Catholic Church (and Cardinal Roger Mahony who quickly sent out this release after Prop 8 passed) and, famously, the Church of Jesus Christ of Latter Day Saints.

I imagine many of those who voted for Prop 8 did so with religious-based prejudices in mind about homosexuality, gay marriage and “family values.” Most of those voters would not likely have been swayed by hearing a pastor, rabbi or imam speak out against Prop 8, but some may have. And this measure passed by a hair that suggests had the no no 8 groups organized religious officials as the yes groups did, we may not be having this conversation.

Hours after the vote was finalized, a gay friend of mine was stunned that Prop 8 passed. In a state as liberal as California, she thought, how could voters opt for something that stripped her of a basic right the majority now enjoys. I asked her how she worked to defeat the proposition before Nov. 4.

“Nothing.”
“Why not?”
“I honestly never thought this would pass. I thought it was a shoe in.”
“Do you think a lot of people felt that way?”
“Yeah, I mean, it's California. We are one of the greenest states; we barely allow plastic bags anymore. How could we have passed Proposition 8?”

Such complacency, she admitted, played a role in the measure's proposition. That, combined with the reasons above, ultimately passed Prop 8.

“And may we all learn from our defeat,” she said.

Photos of Proposition 8 protest by MaryLindsay via LAist Featured Photos Pool on Flickr.