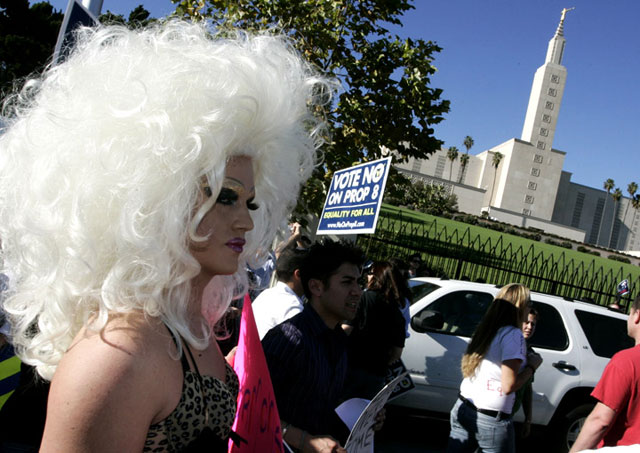 But Marjorie Chrisoffersen, who is also a Mormon, is not feeling good about her actions. She wants to speak to people about it tomorrow before lunch at the restaurant on Beverly Blvd. near La Brea:

I have been sick at heart that anyone has been offended by me. I have family, friends, employees from the gay community who are treasured people in my life.

I have been a member of the Mormon church all my life. I responded to their request with my personal donation.

For years the El Coyote has financially and generously supported the gay community and its charities.

"I think she saw how it affected her pocketbook and freaked," said SFist Editor Brock Keeling who pointed us towards the statement.

Timothy Kincaid, who originally posted the statement on Box Turtle Bulletin, said "I don't believe that Margie acted out of ill intentions. I suspect that she was just obedient to a call put out by her church leadership, a leadership that I believe gave no care or concern to the sacrifice that they had requested of those members with gay friends, families, and customers." He continued to say he might be wrong concurring with Keeling's thoughts.

In any case, tomorrow's lunch could have some great and hopefully open conversation about Prop 8 and the Mormon Church.