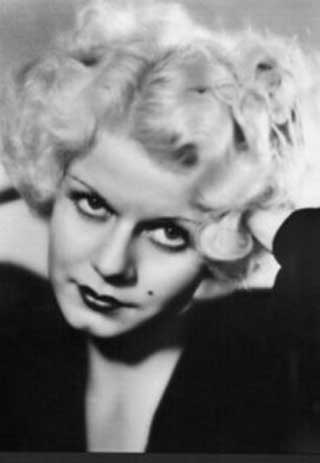 Just like there was an original "It" Girl, there was also an original "platinum blonde." Jean Harlow was born Harlean Harlow Carpenter on March 3, 1911 in Kansas City Missouri. Her father was a dentist from a blue collar background, while her mother was from a rich family. These were only the beginnings of their differences and her mother grew very unhappy in the marriage, eventually turning most of her attention to her daughter. Harlean was the only member of her generation in her family. They called her "the baby," a moniker that persisted her entire short life.

She grew up coddled by her mother, who took her to Hollywood to try to make her an actress, but with few prospects, they soon returned to Kansas. While in a summer camp, she got scarlet fever. A couple of years later, she eloped with a young man with an inheritance named Charles McGrew. The young couple moved away from Harlean's family, to Hollywood, where she became a socialite.

While taking a friend to an audition, Harlean was noticed by executives on the Fox Lot. They insisted on giving her letters of recommendation to other studios. First on a dare from friends, Harlean and went back to the lot, signing in under her mother's maiden name, Jean Harlow. Then her mother insisted that she return to try out. She began to be cast in films, like The Love Parade and Hell's Angels, which, with its color footage launched Harlow into into the sex symbol stratosphere.

In 1931, Jean Harlow starred in a film called Platinum Blonde, directed by Frank Capra. As the eponymous (look it up) blonde, Jean, a natural ash blonde, bleached her hair with a combination of peroxide, ammonia, Clorox and "Lux Flakes." As one can imagine, the process was extremely painful. She was the first to bleach her hair so obviously, and after the movie, she was the original Platinum Blonde.

She blew away the rote stories of good girl blondes and bad girl brunettes. She was a bad girl from the wrong side of the tracks who had a heart of gold, if only the right man could find it and make an honest woman of her. (Bet you were wondering how many cliches I could fit into that sentence!) Often, that man was Clark Gable, who starred in six films with her. There were rumors of romance. 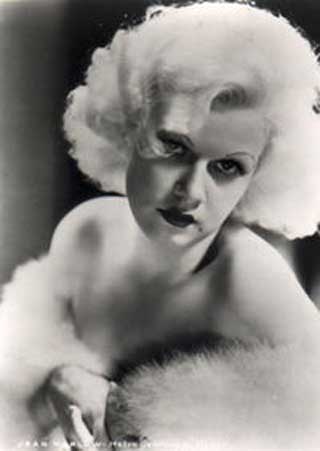 Jean was no stranger to love, after ditching her young husband, Chuck, she married Paul Bern in 1932. Later that same year, he killed himself in their home on Cielo Drive (later house where Sharon Tate was murdered.) It may have been because he was impotent, or he might have even been killed by an ex-lover. In any event, it was the biggest scandal since Fatty Arbuckle fell from grace. She had an indiscreet affair with boxer, Max Baer (whose life was made into the movie Cinderella Man), which MGM put an end to by forcing Harlow to marry cinematographer, Harold Rossen. In 1935, she starred in Reckless with William Powell, with whom she quickly fell in love. After an extended engagement (reasons for which may have ranged between Louis B. Mayer not letting them marry and their differing opinions about reproduction.)

Her star soared. She was in several movies, including Hold Your Man and Red Dust which did huge business during the Depression. She was still young, only 26. But this story doesn't have a happy ending.

In early 1937, Jean contracted influenza. She recovered, and still weak, began work on Saratoga. While shooting the film with Clark Gable, she collapsed on the set. She was taken to the hospital, where doctors declared she had uremic poisoning. She died a few days later. She had made 44 films in 9 years. She was 26.

There were a number of rumors about Harlow's death -- that it was the prolonged result of a particularly bad beating she received from Paul Bern during their marriage, that she was poisoned, that her death was due to her mother's religion, Christian Science, which doesn't allow medicine to be practiced on its members. None are true. In light of modern medicine, we can see that the scarlet fever she had as a teenager had damaged her kidneys. They slowly failed over the next ten years. They had no way to treat kidney failure at that time. The condition was fatal.

Husband William Powell paid for Harlow to be laid to rest in Forest Lawn Memorial Cemetery in Glendale. She wore a black negligee that she had worn just weeks earlier while shooting Saratoga. Rumor has it that someone placed a white gardenia in her hands with a note reading, "Good night, my dearest darling." Her grave is marked with the words "Our Baby."

Saratoga was 90% finished and the used a body double to film the rest. It went on to be Jean Harlow's biggest film. Clark Gable claimed that filming that last ten percent, he felt as if he were "in the arms of a ghost."