Madonna Brings the House Down at Dodger Stadium 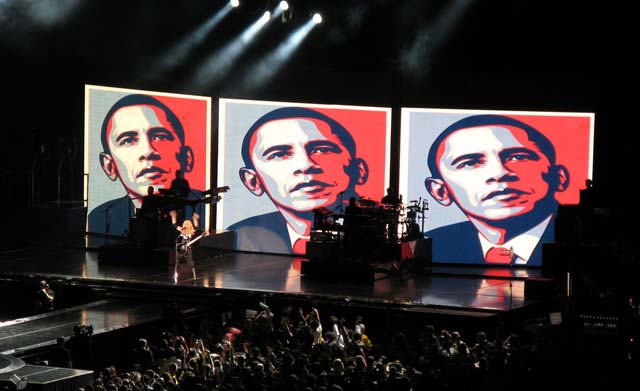 Who likes Obama? | Photo by Alex de Cordoba via the LAist Featured Photos pool on Flickr

It was almost 10 o'clock by the time iconic music superstar Madonna hit the stage at Dodger Stadium last night, and the crowd happily lapped up her "Sticky and Sweet" candy infusion of spectacle and song.

Despite rumors of cancellation due to a broken stage, the 50-year-old megastar came out full force (later apologizing for there being some issues with lighting, which had caused the over two-hour long delay in the show's start) and treated the assembled crowds to two solid hours of visual and aural over-stimulation. Having long since learned that it's never too wise to stray too far from your roots, Madonna worked into her lineup a satisfying smattering of hits from the vaults, including a guitar-rocked "Borderline," an updated take on "Into the Groove" complete with vibrant Keith Haring animation, a clubby remix of "Music," and an acapella sing-along version of "Dress You Up" during the request segment. The most impressive greatest hits moment may well have been the rousing one-two punch of "Like a Prayer," followed up by "Ray of Light," although near the start of the show the audience was bursting at the seams when none other than Miss Britney Spears showed up to join Madonna for the last half of the unapologetic "Human Nature," ("I'm not your bitch, don't hang your shit on me!")

Madonna (whom we believe we should now return to calling Mo instead of Madge, considering her split from Brit Guy Ritchie) proved that age ain't nothin' but a number as she powerhoused her incredible body into dance segment after dance segment, bounding from one end of the massive set to the other in brilliantly staged themed numbers. She was sassy and fired up, and demanded that her audience be the same ("Come on you rich fuckers in the front, SING!" she yelled). Not without timely political commentary, she opted to weave international images in video montages, then paused to express her delight in Obama's election this week, and her resolve to be a part of the fight for same-sex marriage in light of the passing of Proposition 8 this week, both to which the audience responded in wild applause and shouts of agreement.

For fans of Madonna's newer more dance-beat driven music, the night was indeed centered around tracks from her Hard Candy album. As rumored, Justin Timberlake joined Madonna for their duet "4 Minutes" much to everyone's delight, and, not surprisingly, long after Britney Spears was gone and out of sight; the guest spots came with at least an hour's span between them, and according to E!Online, Brit left the stadium immediately following her ex-boyfriend's performance, with the two never meeting face-to-face. 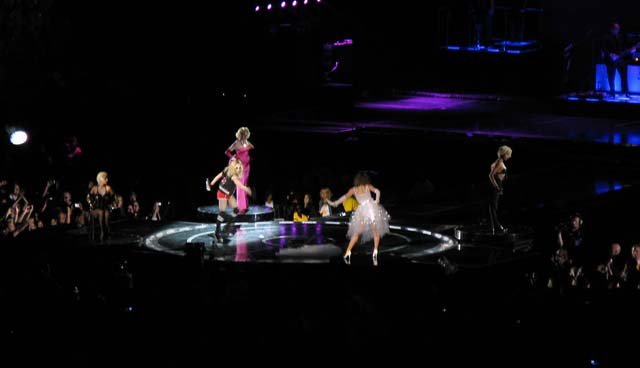 It's pretty impossible for Madonna to make everyone happy, particularly when it comes to busting out the songs that made her famous over 20 years ago. "Oh, no, I hate that song," she told one fan when she'd asked for requests--we didn't hear what the song was, but it sure could have been anything from "Material Girl," to "Crazy for You," or "Papa Don't Preach," since she didn't touch those with a ten-foot pole. Fans hungry for all the incarnations of their beloved pop deity got their fix via an incredible video assemblage of images from Madonna's well-photographed lifetime of styles while she sang "She's Not Me," and stripped backup dancers dressed as quintessential Madonnas of their costumes (pictured above).

All good things must come to an end, however, but last night Madonna showed that her career certainly wasn't one such thing.