Just 130 miles north of Los Angeles lies some spectacular desert scenery. Red Rock Canyon State Park, in Kern County bears the mark of prehistoric lakes, rivers and glaciers in the colorful striations on the cliffs and the rock formations that rise out from the forest of Joshua trees

During the Gold Rush, prospectors passed through Red Rock Canyon, but didn't find any gold there, so continued on to the settlement of Los Angeles. During this time, the canyon hosted a freight line, a stagecoach route and a US Post Office. (Continue reading below photo gallery)

In 1908, a railroad was built through the canyon to help with the construction of the first Los Angeles Aqueduct, which can be seen today just four miles west of the campgrounds.

Of course, all the buildings are gone now - the canyon became a state park and a protected area in 1968. 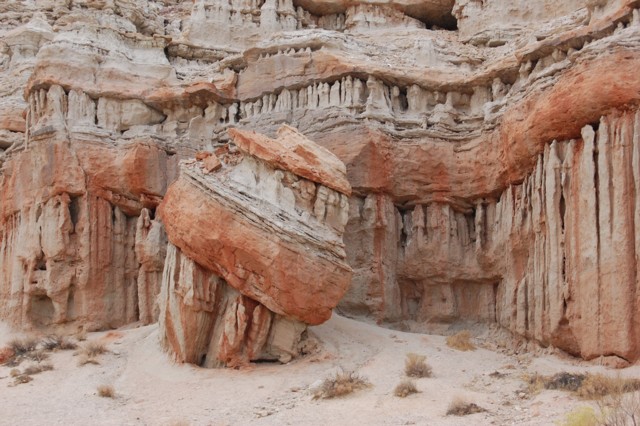 Today, the area is popular with OHV drivers on weekends, but during the week it's deserted and the only noises are the birds and the wind blowing past the rocks and the Joshua Trees.

The park has many miles of spectacular hiking trails, and many drive-in campsites. If you're looking for more private camping, the park also has a hike-in campsite. The park is host to many species of plants and animals (including wild tarantulas, which the park ranger assured LAist are not aggressive or harmful to humans. LAist isn't sure about this), and during the spring has many wildflowers.

Red Rock Canyon's visitor center is right off Interstate 15 in Kern County. The nearest town in California City, about 20 miles to the south. The Red Cliffs area is easily seen from the highway.

Be sure to stop first at the ranger station in the Ricardo area for tips on the best places to hike! Many areas are a short walk from your vehicle, but if you're interested in a longer hike, LAist recommends the 'Nightmare Gulch' section of the park

The highway to Red Rock Canyon is well-paved and not too steep. LAist's aging vehicle made it just fine, and grand total round trip was less than one tank of gas.

Red Rock Canyon can be extremely hot in the summer, and cold (near freezing) in the winter, so dress accordingly. It's also very dry, so bring lots of water if you're going to hike - the desert air and elevation made LAist thirsty very quickly.

For more information about Red Rock Canyon State Park, check out their website.