Will There Be Enough Ballots? 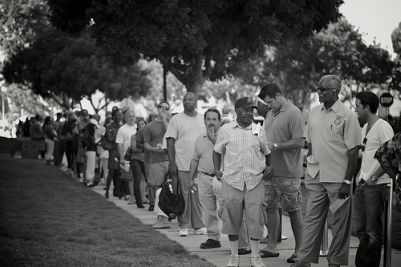 Election officials are bracing for tremendous turnout at polling places throughout Los Angeles County Tuesday and reassuring voters that enough ballots will be on hand to serve the millions expected to show up for the hotly contested race.

Dean Logan, county clerk for the L.A. County Registrar-Recorder, said the his office is planing for what is expected to be record voter participation by equipping polling places with "sufficient numbers of ballots and a contingency plan to ensure all voters are served on Tuesday," he said.

On Sunday, Work the Vote Los Angeles wrote to Logan, concerned that enough ballots will not be on hand while others continued to worry that their absentee ballot would not be counted until well after Nov. 4.

Logan said his office, which oversees 4.3 million registered voters — the largest jurisdiction in the nation — has been prepping for this election since last year and has been tracking the prospective impacts a crush of voters might have on busier precincts to ensure all goes as planned.

To do that, he said, the county will have ballots on hand for every voter in L.A. and officials will monitor each polling place for accuracy.

Still, there could be a shortage of ballots, which Logan said his office is also prepping for:

Also, the Secretary of State permits poll workers to issue "emergency/demonstration" ballots-- generic ballots that are not coded, which allows them to be used at any polling place if necessary-- that are already at the polls for voting purposes, he said.

During the required 28-day post-election canvass, County staff will properly account for emergency/demonstration ballots to ensure they are counted in the corresponding precinct where they were cast. [Logan]

Since Oct. 6, when early voting began in Los Angeles, more than 500,000 voters in the county have returned vote-by-mail ballots and more than 20,000 residents have already voted at the registrar's office in Norwalk, Logan said.

"Los Angeles County is committed to ensuring that all voters are able to cast their vote on Election Day, and several fail-safe processes are in place to make sure that everyone's voice is heard," he said.

Photo of voters by nathanus, via LAist Featured Photos Pool on Flickr.