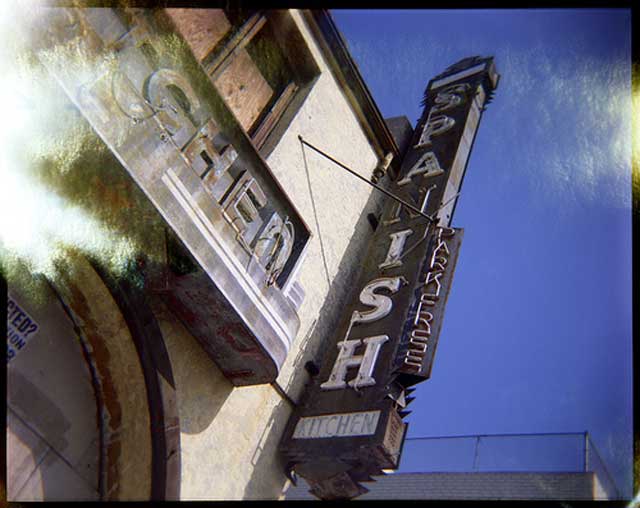 Some ghosts (though it's a little late in the season for it) aren't what you think. They aren't wailing waifs or glowing skulls. They're a restaurant called the Spanish Kitchen. I'm not talking about the Spanish Kitchen on La Cienega — decorated like there's a South America Land in Disneyland and it's in it, though they have a sign that is an authentic reproduction of the sign at the original Spanish Kitchen.

Only in Los Angeles has the landmark been destroyed but there is some kind of authentic reproduction hanging around.

The Spanish Kitchen was a diner-esque restaurant opened in 1938 at 7373 Beverly Boulevard. It was run by married couple, John Carreto and his dancer wife Pearl, who lived upstairs. Carreto had been the maître d’ at the Coconut Grove. He had opened a Spanish Kitchen downtown, and was now expanding westward. People like Bob Hope and Buster Keaton ate there. In 1961, the restaurant was still doing a brisk business when one day, it simply never opened up again. Peeking in the window, one could see nothing amiss. The menus, the napkins the forks knives and spoons, the old murals of dancing girls and cowboys, even the pot of enchilada sauce on the stove. Everything in its right place to open the next day -- even twenty years later. 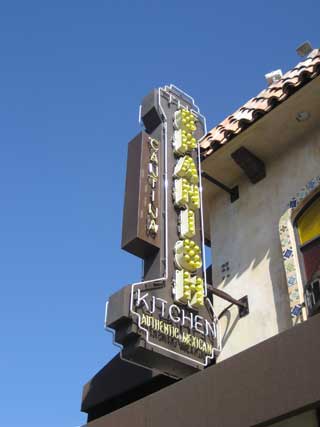 Myths sprung up around the place the way they do around the unexplained. There was a story that the couple who had run the place had been murdered by the mob in their upstairs apartment, killed each other in a lover's quarrel, that the husband had been murdered there, and the wife wouldn't open it till the killer was found. It was an object of wonder -- a place left exactly the same as it had been the day it closed (except for the motes of dust.)

The truth was a little more mundane. Johnny came down with Parkinson's. When he couldn't manage the restaurant anymore, Pearl shut it down, either because she found she couldn't run it on her own, or to care for him (possibly both), always intending to open it up later. But Johnny died in 1962, and she couldn't bring herself to do it, though she lived above the restaurant for years, feeling like she had failed her husband by closing his dream. The sign put up about the closure, "Closed for Vacation. Back August 23rd," fell down.

You'd think that a closed restaurant wouldn't attract much attention. But people claimed to see the ghost of a woman in the kitchen. And it had been a popular place, in a desirable location. Soon reporters and concerned citizens began stopping by, wanting to know what happened. But Pearl didn't want to talk about it. She grew more reclusive, though she continued to talk to friends, follow baseball. A neighboring business put up a sign, claiming to have information on the closure for a dollar. In true Los Angeles style, the place was eventually torn down and they put up a fancy salon there.

Some ghosts aren't vaporous barely-there beings, they are love letters made of concrete and brick, linoleum and steel. But no matter how permanent they seem, even these fade from the earth.

Val Verde
Thelma Todd's Roadside Cafe
An eclectic house in Beverly Hills
Echo Park's Bonnie Brae House
Marineland of the Pacific
Grand Central Air Terminal
LA's Own Wrigley Field
How LA got its name
The wreck of the Dominator
The 1925 "Hollywood Subway."
The Pink Lady of Malibu
Lions Drag Strip
Disneyland...when it was cheap to get in
The ugliest building in the city
Union Station
Union Station's Fred Harvey Room
A Smelly Mystery at another train station
The Egyptian Theatre
Pilgrimage Bridge
The "It" Girl, Clara Bow
Elias J. "Lucky" Baldwin
Get Involved!
Houdini's House