LAist Interview: Jessica Lawless and Sarah Ross of the Audacity of Desperation 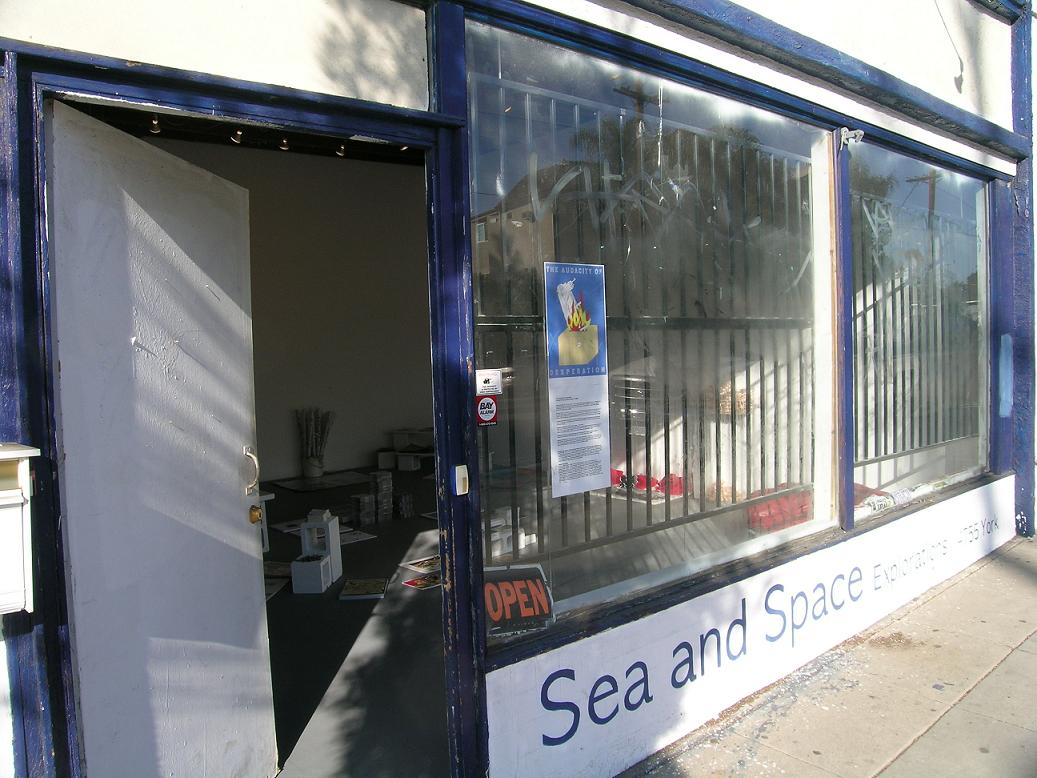 Jessica Lawless and Sarah Ross are both artists and educators. They met in graduate school at UC Irvine. Because they share a similar sensibility about art making and politics, they decided to collaborate on a project together. The Audacity of Desperation is the result. The exhibition is in Los Angeles from October 26th through November 16th.

LAist: So, what *is* the Audacity of Desperation? And how did you come up with the concept?

Jessica Lawless and Sarah Ross: We started this project more than a year ago. We were thinking about how the stakes had changed so much since the 2000 elections. Folks who are far left had abandoned any discussions of third party candidates and were putting their hopes in Obama or Clinton. What does it mean when those of us who remember that the Clinton years were supposed to be some sort of renewed belief in “the system,” that he was supposed to be “our” JFK, but what happened was “don’t ask don’t tell” Monica Lewinksy, and corporate globalization. It was under his tenure that the international anti corporate globalization movement took shape. We were interested in the idea of being both excited and skeptical at the same time. And we were interested in the idea of “political depression” that Feel Tank, an artists group in Chicago, was addressing after the 2004 elections. We felt putting faith in an electoral system was a desperate but necessary action. We thought, is it possible for desperation to be a place to act from to create change?

LAist: Tell us about the tour.

JL and SR: The project started in Urbana, Illinois at the Independent Media Center, the only one in the country that owns it’s own multi-use community space. In June, our friend, Steven Lam, who is an artist and curator, brought parts of the show to PS122 DEMO space and artists there added distributable pieces and performances. Now the show is here in LA at Sea and Space Exploration, which is a fabulous alternative space run by artist Lara Bank.

LAist: Exchange Rate: 2008 was held last week here in Los Angeles. How did the event go? What was it about?

JL and SR: The evening was it was all a lot fun. We had over a 100 people there. Exchange Rate 2008 is an international performance art event curated by Elana Mann that has been happening at different spaces throughout the country. All of the performances are a response to this the U.S. election, by artists from 16 different countries. At Sea and Space, the performances were about the war in Afghanistan, remembering 1990s feminism, election fraud, and just simply breathing and recalling one’s dreams. We collaborated with Elana because both shows used exchange as a starting point—exchange of ideas, exchange of dissent, and connection through creative actions.

LAist: Tell us about the events you’re hosting on the Day of the Dead (Today, Nov
1st) and Election day (Nov 4th).

JL and SR: Today we’re having a Day of the Dead inspired memorial for the final days of the Bush administration. Maleka Kubrah and Ak-Ami will show people how to embroider images from fantasies and realities of revolt and victory. Irina Contreras and Kelly Besser will park The Miracle Bookmobile on site and offer free G, PG, R and X-rated reading material in both English and Spanish. There will also be a stencil making workshop and a crafting corner where you can make your own Bush Administration Memorial Death Mask.

On election night Sarah Kanouse will broadcast election coverage remixes recorded during the Unconvention in Minneapolis. That was one of the places Exchange Rate also had a project. And of course, election returns will be projected in the gallery. If you come, bring food, drink and a handheld radio from your emergency kit- which we obviously all have living in LA.

LAist: How many artists did you gather together for the Los Angeles events, and how did you accomplish this feat? 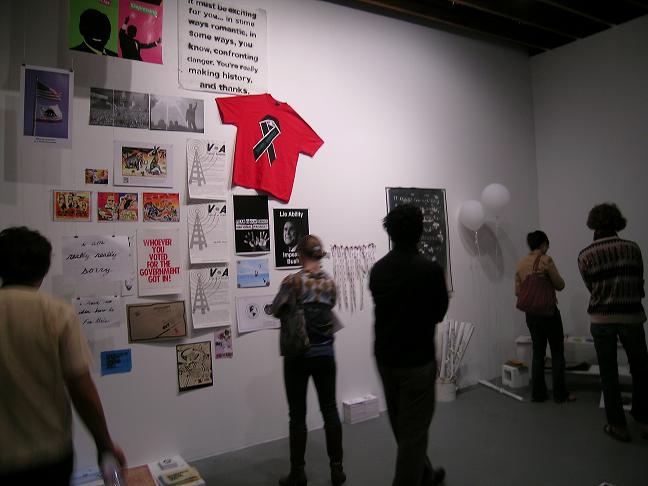 JL and SR: We originally put out a call for work on a variety of art and activist lists and we created our blog site. We also asked people whose work we thought would fit the theme to submit stuff. The first iteration had about 40 artists. When the show went to New York more people were added and now a handful of them are included in the LA show. We did this long distance via a lot of phone conversations. We call ourselves organizers more than we say curators because it involved a lot community organizing sort of skills.

LAist: In the two weeks following election day, you’re hosting two events that aim to facilitate discussion on what America’s faced with after the election. In fact, the title of one of the events is “HOLY FUCK! NOW WHAT?” (Aptly titled). This event will definitely foster good communication over a much-needed topic. What do you personally think about the very real excitement and organizing around electing Barack Obama as president, and how that energy can be sustained for the larger movement and the hard work ahead?

JL and SR: Well that is actually why we are having post elections events. We planned the show to last past November 4th because that is really the beginning date of what comes next. It’s only the end of the spectacle of the elections. What you’re asking is what we’re asking. You should come to those discussions.

[More information on the events tonight and in the following two weeks can be found at the Audacity of Desperation site and the Sea and Space Gallery site].