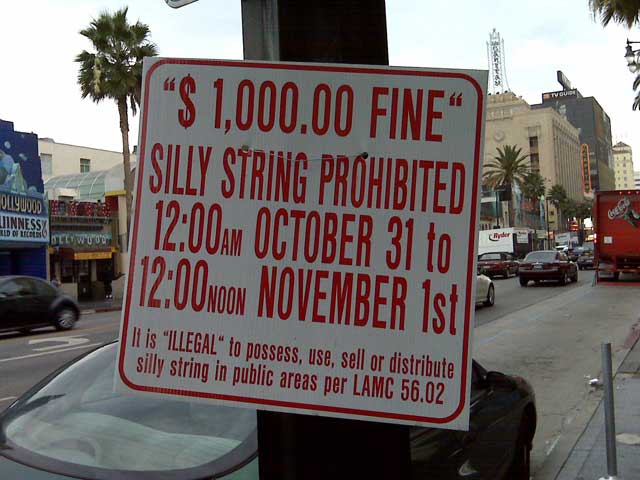 Signed into law in 2004, the Silly String law is meant to curb the amount of silly string that used to trash Hollywood streets during Halloween. The city reasoned that the cans were a safety hazard, causing people, horses (for police) and motorcycles to potentially slip and fall in additional to being used as a drunkenly weapon projectile. The string itself, they say, would clog storm drains, ultimately causing an environmental hazard traveling to the ocean.

But don't fret if you plan on using silly string at a party downtown or on the Westside The ordinance only covers the LAPD's Hollywood division and is in effect October 31st of each year, through 12:00 p.m. on November 1st of each year. You can read the full ordinance below:

An ordinance adding Section 56.02 to the Los Angeles Municipal Code to
prohibit the possession, use, sale or distribution of a product commonly known as
"Silly String" in the Hollywood Division of the Los Angeles Police Department during
Halloween festivities for reasons of public safety and environmental concerns.

WHEREAS, every year, a large quantity of products known as "Silly String" are
used and the empty Silly String cans then are discarded in the Hollywood Division of
the Los Angeles Police Department during Halloween festivities; and

WHEREAS, Silly String and Silly String cans cause a safety hazard in that they
may cause pedestrians and police officers on horseback or motorcycles to slip and fall;
the cans may be used as weapons in the event of a melee; and in the past the cans
have been thrown at store windows along Hollywood Boulevard; and

WHEREAS, Silly String and Silly String cans cause an environmental hazard in
that these products are discarded in large quantities onto the street, clog the storm
drains, and ultimately travel to the ocean.

THE PEOPLE OF THE CITY OF LOS ANGELES
DO ORDAIN AS FOLLOWS:

Section 1. A new Section 56.02 is added to Article 6 of Chapter V of the
Los Angeles Municipal Code to read:

(a) For purposes of this section:

1. "Silly String" shall mean any putty-like substance that is shot or
expelled in the form of string from an aerosol can or other pressurized device,
regardless of whether it is sold under the name "Silly String" or any other name.

(b) No Person, as defined in Municipal Code Section 11.01(a), shall possess,
use, sell or distribute Silly String at, within or upon any public or private property that is either within public view or accessible to the public, including, but not limited to, public or private streets, sidewalks, parking lots, commercial or residential buildings, places of business, or parks within the Hollywood Division during Halloween.

(c) Any violation of this section is a misdemeanor subject to the provisions of
Los Angeles Municipal Code Section 11.00 (m).