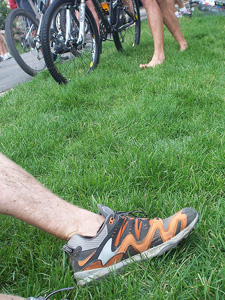 If assigning large numbers of officers to patrol bicycle rides wasn't enough, the Santa Monica Police Department is now making sure people don't exercise in the wrong spot. If you do, you could end up with a $158 citation and possibly be put in the back of a squad car as online music company exec James Birch was.

"I was more than a little outraged that as a taxpayer I was no longer able to use public property for exercising," he told the LA Times. The crux of the problem is the medians along 4th Street near Adelaide Drive where people run, walk, jog—all legal activities under city code—and stopping in place to work out—a citable offense.

A public meeting is set for tonight where residents from both sides of the issue will speak out to the city, according to the Times. However, any mention of said meeting is not easily found on the city's website.