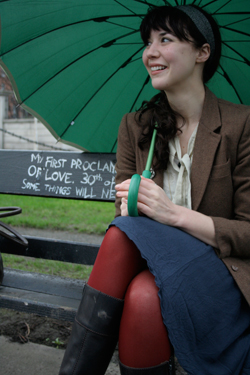 Although it sometimes takes two or three listens to truly appreciate and feel familiarity with an album, Lisa Hannigan’s debut, Sea Sew, is a different story. Hers is a rare record that feels comfortable on the first listen—sort of like slipping on a pair of warm, fuzzy slippers and curling up next to the fire on a blustery day.

Even before the release of Hannigan’s album, she had already become well known for her supporting vocal work with artists such as Herbie Hancock, Gary Lightbody of Snow Patrol, and most notably, Damien Rice. This week, she will play a solo show at Largo on Thursday night and will open for Jason Mraz at the Greek on Saturday. LAist caught up with Hannigan last week to chat about sewing, venn diagrams and what it feels like to be drenched in chocolate.

LAist: Would you mind sharing the story of how you came up with the name Sea Sew?

Lisa Hannigan: Sure! I knew I wanted to sew all the lyrics [for the CD packaging], or at least the lyrics for the six shortest songs. So I wanted to get the stitching done, and then as I was doing the lyrics, I noticed there were quite a few references to the sea. Sea Sew came to me and it’s reminiscent of seesaws, and there was something quite childlike about it. I quite liked the sound of the words together.

What did you do with the sewn lyrics after they were photographed for the album?

They’re at home and my mum has them. They’re just in a folder somewhere. I will probably frame them up at some point and give them to a couple of people.

“Venn Diagram” is such an inspired name for a song. Does it have a story behind it?

Yeah, it’s that idea of when you’re on a different sleeping pattern with somebody. You’re going to sleep as they’re waking up, and you might have a very short crossover where you’re both asleep at the same time. Pretty much the only thing I remember from math in school is venn diagrams. (laughs)

In that song, I love the line, “A note penned clumsily in this century’s type-ruined hand.”

Thank you! Well, if my handwriting is anything to go by, that’s definitely true.

It seems that strings are an integral part of your record. Do you keep the orchestration in the back of your head when you write music?

Not necessarily. I certainly do when I’m arranging it, because I have a specific sound in mind. I knew I wanted a cello and a violin and the other various instruments. When I was arranging, I had to come up with the string lines, and then the girls made some of it up themselves, like for “Sea Song.” Vyvienne Long and Lucy Wilkins are amazing players—they just jammed!

Is there any chance you might release the flirtatious “I Don’t Know” as a single?

I haven’t really thought about the singles so much. I would imagine it’s certainly the most radio-friendly. In Ireland, we released “Lille” actually, and that worked really well and they played it a lot. But I’m not sure how that will translate to the rest of the world. We’ll see. I’m open to anything, really. 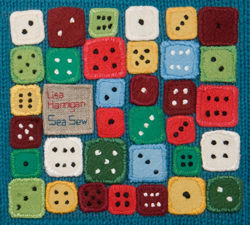 “Lille” is a great way to end the album. What is that instrument you use near the end?

It’s a harmonium. It’s an Indian instrument that’s kind of like an accordion, but sort of on its side. I’ll play it at the Largo gig, so you’ll see it there, and it has a wistful melancholy about it.

I saw Beck playing it once, he did “Nobody’s Fault” by himself and it was amazing, so I had to find out what it was and how I could play it. I’m not really good at playing instruments, but the harmonium’s perfect because you can make a lot of noise and you can create a very full sound without actually playing anything too intricate. It’s an important sound for the record and I find it quite nice to write on as well.

Do you think that the release of this album was perfect timing, or looking back, do you wish you’d produced a solo album sooner?

Not really. Everything happens in its own time. I love the record and I love how it has come about and the people who are playing on it. I think it’s just right. If it had come out earlier, I’m sure it would have been a different record and I don’t know if I would have liked it as much.

I find it amusing that, in your myspace bio, you say that you’re bad at leaving voicemails for other people, and yet that is often how you initially record lyrics and melodies. Any chance you might someday release a collection of voicemails you’ve left for yourself?

(laughs) I doubt it, because I’m usually walking down a busy street humming away and you can barely hear me. They don’t seem to make any sense as well. It’s very rare that the voicemail ends up being something proper. Occasionally it has, but not usually. Normally it’s the sound of buses and horns and people shouting.

I read somewhere that you worked out the instrumentation for Sea Sew on a computer. What program did you use for that?

Well, I went to my friend Jason Boshoff, who actually recorded the record. He works in a studio in London. So I’d go to him and say, “And now I’d like the trumpet to go here…” I think he uses Logic, but it’s really just a MIDI controller, so I’d be there at the piano hammering out the trumpet line and he’d help me get the right sound and that kind of thing.

Is it true that you rehearsed the album in a barn? I’m guessing it wasn’t the kind of barn that had animals in it, right?

Well…nearly! It belongs to Tom Osander, our drummer. He lives on a farm down in Kilkenny and has a big barn that he uses for storage. He has a lot of animals but they don’t live in the barn—luckily! So we cleared out the barn and filled it with instruments. 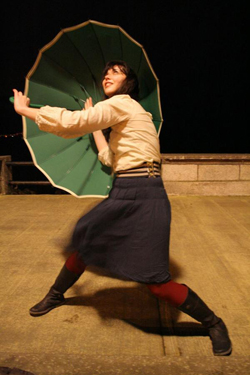 Before you got into singing, you were pursuing degrees in art history and French. Have you ever written any songs in French?

I have never written a song in French, actually. If we start touring in Europe, I’d love to have a song in French to sing. Or maybe I’ll just translate one of my own. But it’s a beautiful language to sing in. I used to do some classical singing, and a lot of songs would be in French. It does lend itself to music. And they’ve got this fantastic music scene over there, for women in particular, and it’d be great to do at some point.

Speaking of things you’d like to do, did you end up running the Bupa Great North half-marathon earlier this month?

(sighs) I didn’t. I did it last year and I was supposed to do it this year. It ended up being a complete nightmare because I had a gig in Cork, Ireland, around that same time. In order to make it, we would have had to drive straight to the airport to get a flight to the marathon, then immediately go back to the airport to catch a flight to New York to do eight shows in six days.

I’d done all my training and I was going to do it, and then my manager—who was also going to run it—said, “You’re not doing this. I’m not allowing it.” So I said, “OK then.” (laughs) It’s a really lovely run. I think 55,000 people do it. I’m still running on tour when I can, so hopefully I’ll be able to do it next year as well.

What has it been like going on tour with Jason Mraz?

It’s great. I actually only met him two weeks ago when we started the tour. He had seen me sing a couple of years ago when I was in a different band, and since then he’d kept an eye on my stuff. When he heard I had a solo record coming out, and he was doing an American tour at the same time, he asked me to join him.

Does touring in the United States differ greatly from touring in Ireland?

Yeah, I suppose that when you travel, there are always things that are strange and different. Our main grumble, if you can call it that, is that we can’t make a proper cup of tea. But we got ourselves a kettle so that’s been helpful. People’s mums are sending us care packages with the right tea bags and stuff.

But the audiences here have been fantastic. It’s always different when you’re opening up for someone else, as opposed to doing your own shows, because people aren’t there to see you. But Jason’s audiences have been so kind and receptive to us.

It’s great that you’ll be playing a solo show at Largo at the Coronet next week. Have you ever performed there?

I had done background vocals years and years ago for a show at the old venue, but I haven’t been to the new one. I’m looking forward to it.

What are some of your favorite things to do when you visit Los Angeles?

I actually have an auntie who lives in LA, so I go and see her. And I love eating sushi. I can’t remember the name of the place we go to, but it’s on Sunset. I like going to Mel’s Diner. Also, whenever I go anywhere, I try to find one or two vintage clothes shops so I can get myself some dresses.

Just to walk around is fun. You can walk forever in LA, so that’s good. But you have to get back, that’s the only problem. I’ve done that a few times—I’ve walked for a good few hours and then thought, “Oh man, now what do I do?”

I know we’re nearing the end of the interview, but I just have to ask: What was it like being drenched in melted chocolate for Oxfam Ireland’s “Make Trade Fair” campaign?

It was incredible. They asked me, “So, what do you want to have dumped on you?” because that was the campaign. Michael Stipe had milk poured on him, and other people had cotton and coffee beans. And I was like, “Seriously? You’re even asking me? I’ll have chocolate, please!”

It was amazing and definitely an experience I would highly recommend, but it was also quite cold. It became sticky and unpleasant very quickly, but I did have a sneaky lick of my arm on the way home in the car. (laughs)

I know this might be premature because your first album was released last month, but have you already started working on your second record?

Well, I suppose you’re always working. I always want to keep going and keep writing, because if I have to sew all the lyrics—or carve them or whatever I’m going to do—for the next album, I’d better start now!

Thanks for speaking with LAist, Lisa!

Don’t miss Lisa Hannigan this Thursday (10/30/08) at Largo and Saturday (11/1/08) at the Greek Theatre. Although her album has not yet been released in the United States, CDs and digital copies of the album are available for purchase at www.lisahannigan.ie.

Photos by Ian Moynihan and via Lisa Hannigan's myspace page