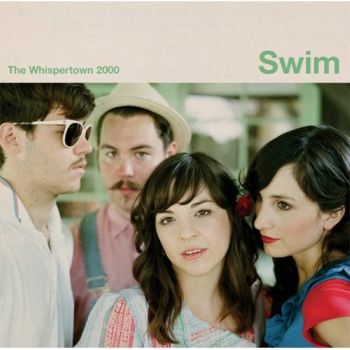 Less than a minute into the opening track of Whispertown 2000's second full length album Swim, you start to wonder if this is another quartet of musical pretenders riding the coattails of more successful artists before them.

Opening track "103,” a country infused adage about the weariness and wariness of growing old, frolics playfully – guided by lead singer and guitarist Morgan Nagler's slyly beautiful voice. It's a love song for centenarians, (“When I'm a hundred and three/Will you still like me when my body's gone?”) but it's playful tone is not enough to carry an album through 11 songs. Or at least not enough to be taken seriously.

But any doubts about the intentions of Nagler, together with co-singer and percussionist Vanessa Corbala, guitarist Tod Adrian Wisenbaker and his brother, bassist Casey Wisenbaker, are erased 17 seconds into track two.

Whispertown 2000 is the first band to be signed to Gillian Welch and her musical partner David Rawling's Acony Records. Their debut album, Swim moves effortlessly through the Alabama back country with slow drawl country ease and back toward big city drums. It is an achievement of sizable proportions from a quartet that has already garnered big name fans, from Welch to Conor Oberst to Jenny Lewis.

It would be easy to chalk up Whispertown as the next Rilo Kiley. There are, of course, strong similarities (sterling voiced female leads, back up male vocals and too many songs about love), but where Rilo Kiley has failed of late, Whispertown takes up the slack.

"Swim" boils over with attitude and eclectic feats of subdued imagery. Its 11 tracks, for the most part, show a timeless, care-free longing for good times and friendship that are as much an anthem for our every day lives as any generations.

On "Done with Love," Nagler sings with a fatalistically somber tone that guides the more bluesy track. If "103" showed a blissful hope for eternal love, "Done with Love" seeks to prove Matt Groening correct: Love is hell.

But sad can be gorgeous (just ask anyone who's listened to Elliott Smith) and Nagler--accompanied by an array of instruments and voices - seems to understand this perfectly. For example, third track "Pushing Oars" sings about an existential sea journey with walls "falling away" and boats swaying on the rocky sea. It is backed up by Tilly & the Wall keyboardist Nick White on piano, a guest musician theme that Whispertown rides throughout the album.

Through sadness and isolation there are signs of hope, mostly through 2:52 of the album's unequivocal zenith: "Erase the Lines," a group hug of a ditty with a majestic build and crescendo in the vein of Radiohead's You and Whose Army. It starts off softly, with both Nagler and Corbala sharing lead vocals. Tod Wisenbaker enters the refrain with a broken voice of deep symbolism who once again gives way to the women, synthesized whistling and two minutes of beautiful raucousness calling on the incredible capacity of each band mate.

There are undeniable speed bumps on an otherwise superb first effort. "Old Times," as its title implies, tells of a distant longing ("Nothing's gonna do it like the old times"), but the lyrically gifted Nagler gives way to a series of hand claps halfway through the song that cheapens the verbal effect. Album closer "Mountain" meanders aimlessly without much character or attitude (which most of the other 10 tracks had in spades).

Still, Nagler is one of the most interesting songwriters making music today and her cohorts provide a compelling backdrop to usher in a new sound of old style music in a city that is defined by its inconsistent eclecticism. In that sense, "Swim" may be the perfect L.A. album and Whispertown could represent the best of what L.A. has to offer. Or not, because if we learn anything from Swim it is to sit back and enjoy life or, as Nagler sings on "Erase the Lines:" "Sit back and toast to a world so fine."