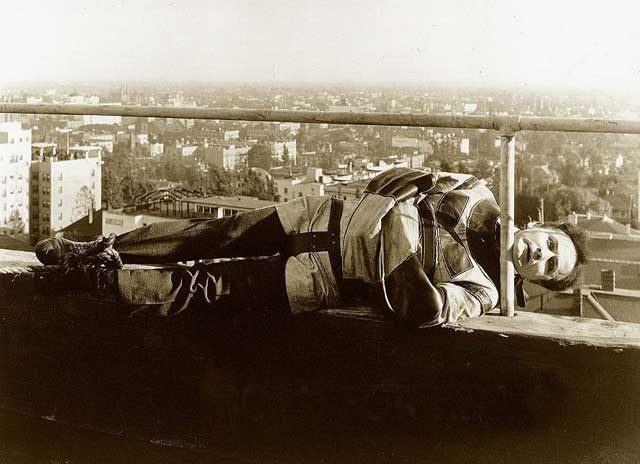 What better way to celebrate Halloween than to talk about Harry Houdini, the greatest magician who ever lived. He died on Halloween in 1926 and on that day for 10 years thereafter, his wife tried to contact him by holding seances. He starred in a few early movies even — mostly silent pics and serials. And he lived here for a time, though he was based mostly out of New York.

These days, magicians seem somewhat fey, more like socially-sanctioned con artists who do their work with funny camera tricks and carefully timed special effects. There was a time where magic actually took skill. And everyone knows, Harry Houdini had mad skillz.

Born Erhich Weiss in Budapest in 1874, his family emigrated to America when he was four years old. His father, a rabbi, settled his family first in Wisconsin and the in New York City. His name Harry, comes from "Ehrie," the diminutive of his name among his family. He became a professional magician at the age of 17, borrowing the name "Houdini" from his hero, French magician, Jean Eugene Robert-Houdin.

In the beginning he did card tricks and eventually moved up to escape -- specifically handcuffs, which got him entree into the world of vaudeville. By this time, he had met and married his wife, Bess Rahner. He began to perform all kinds of escapist stunts, including getting out of straitjackets, chains, and, one of his more famous tricks, The Chinese Water Torture Cell, where he was suspended upside down and chained up in a tank filled with water.

Houdini accomplished his daring escapes by dislocating his shoulders (his brother Theo, who had a shadow career as an escape artist, could only dislocate one shoulder, but Harry could do both), expanding his chest, wrists and shoulders (to make more room while he was being bound) and regurgitating strings, keys and other supplies. 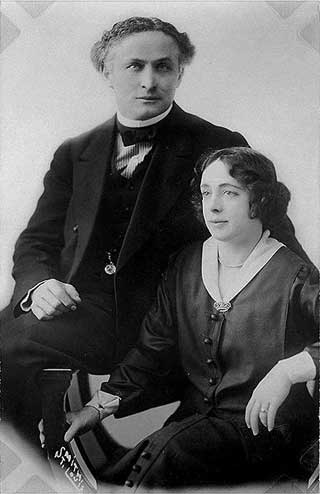 Houdini was the first magician to operate on such a scale. His earlier tricks were small. He and Bess switched places in locked trunks. He swallowed a needle and thread and regurgitated the needle already threaded. Later, his illusions and escapes were more epic. He went over Niagara Falls, jumped, fully bound in chains, from the Brooklyn Bridge and caused an elephant to disappear.

Houdini made a second career for himself exposing fake spiritualists. Not only did he offer a prize to whatever medium could prove beyond a doubt that they had contacted the other side, but he also disguised himself and went from psychic to psychic in the company of a cop and a reporter. It was through this curious pursuit that he ran afoul of Sir Arthur Conan Doyle -- once a close family friend, who believed in the supernatural quite passionately. After Houdini's death, he published a book in which he postulated the theory that Houdini himself was a psychic so powerful that he could block the powers of those he pretended to be debunking. 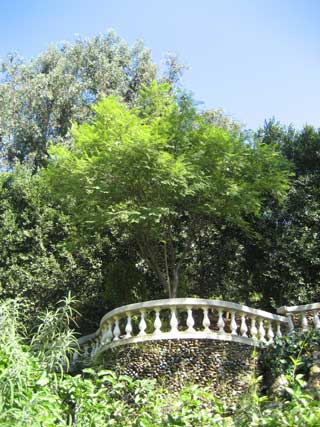 Despite having sought truth so desperately, Houdini's life lends itself to an abundance of apocryphal tales. People don't even know where he lived. Some say that he never lived in Laurel Canyon, others that he lived in a different house than usually thought, further up the canyon, but it burned. The house that people associate with Houdini is more visible from the narrow canyon road. Commuters have viewed its ruined stairs and balustrades for decades -- some have even thought they saw Houdini's ghost wandering through the ruins. In fact this property was owned by the Walkers, a family of furniture entrepreneurs. Bess is listed as living in a guest house that was formerly part of the Walker property some time in the 1930s, long after Houdini's death.

Probably the most well known untruth was propagated by the 1953 film of his life, starring Tony Curtis. In the film, Houdini dies as a result of performing his famous Chinese Water Torture trick, which is completely untrue.

In fact, Houdini died of appendicitis on October 31, 1926. He was fifty-two. In the days before his death, a youth punched him in the stomach several times while he was unprepared, backstage after a show. Part of Houdini's performance was that he invited audience members to punch him, which he was able to withstand by tightening his abdominal muscles (don't try this at home kids!) Many thought this was what killed him. This is not the case -- he was already suffering from the appendicitis, however, it may have prevented Houdini from seeking the medical help he needed.

Houdini, an adventurer to the last, had a bargain with his wife, that whoever died first would visit from the other side and give a coded message if such a thing were possible. Every year, Bess Houdini held a seance. Every year, nothing happened. At the end of the final seance (she passed the tradition on to someone else) in 1936, on the roof of the Knickerbocker Hotel, she blew out the candle she kept lit beside his photo saying: "You can only wait for any man just so long."

Val Verde
Thelma Todd's Roadside Cafe
An eclectic house in Beverly Hills
Echo Park's Bonnie Brae House
Marineland of the Pacific
Grand Central Air Terminal
LA's Own Wrigley Field
How LA got its name
The wreck of the Dominator
The 1925 "Hollywood Subway."
The Pink Lady of Malibu
Lions Drag Strip
Disneyland...when it was cheap to get in
The ugliest building in the city
Union Station
Union Station's Fred Harvey Room
A Smelly Mystery at another train station
The Egyptian Theatre
Pilgrimage Bridge
The "It" Girl, Clara Bow
Elias J. "Lucky" Baldwin
Get Involved!