A Strikeout for Villaraigosa 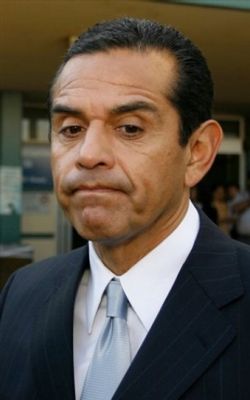 Around the fourth inning of the National League Championship Series Monday night, as the hills north of Los Angeles continued to burn, Fox cameras panned to the dignitaries sitting in the luxury seats.

With its usual host of celebrities and debutantes, the collection of upper crust was noteworthy for only one reason. Amongst the select crowd was Los Angeles Mayor Antonio Villaraigosa, who smiled as Derek Lowe was mowing down the Phillies; smiling as thousands in the San Fernando Valley were driven from their homes by two blazes that burned without care; smiling as thick smoke choked parts of four major freeways closed earlier in the day; smiling hours after 19 homes burned; smiling after two had died.

Earlier in the day, a yellow flak-jacketed Villaraigosa mugged for the camera with two City Council members. The mayor somberly updated the viewing audience with news of the massive blaze including the apparently homeless man who perished with a dog.

But that was in the afternoon, around 2 p.m., and the social butterfly mayor whose omnipresence is only tempered (or perhaps aided) by his ambition, had to be seen. And there he was, yucking it up with the stars having turned in his yellow jacket that screamed, I care about this fire, with a Dodger blue one that whispered, I'm a fan...really.

Now, I wasn't at the game so I can't say if the mayor was publicly announced. In the past, when I noticed him sucking up to Dodger owner Frank McCourt at the stadium, I do not remember Villaraigosa's attendance a matter of public discourse. Perhaps this is because of the cool response his blown up face usually receives from a crowd of Doyer and Dodger fans at the stadium who should both be his base. But he was unmistakably seen by a television audience of millions, any number of whom could have noticed his presence.

(He must have left the game before it ended because of a press availability Villaraigosa held with the Los Angeles Fire Department at 10 p.m. in West Hills. Villaraigosa officials could not be reached for comment tonight for this story.)

You might be saying, who the hell cares if a mayor who is also an Angeleno who also might be a Dodger fan, takes in one of the biggest games of the year? Usually, that is fine. Mayors, after all, are people too and they have a right to enjoy themselves as long as it does not conflict with their responsibilities. You could even make the case that it is politically expedient to be seen at the city's primary sporting event of the season.

But with firefighters working overtime to douse 10,000 acres of charred landscape, Villaraigosa had a responsibility to monitor the blaze from a location not quite as, well, fun, as Dodger Stadium. He might not have been able to do anything from his home or office, but perception is everything in politics and Villaraigosa knows that better than anyone.

Remember when LAist asked if Villaraigosa was campaigning for then-presidential candidate Sen. Hillary Clinton on our city's dime? After inquiries from other press outlets and the resulting maelstrom, he cut his trip short. Villaraigosa is now mulling whether or not there is enough pressure on him to fire Director of Animal Services Ed Boks all the while stuffing his 2009 campaign coffers as he considers a possible run for governor in 2010.

I don't mean to critique Villaraigosa for his starry eyes and content that there is nothing wrong, in principle, with a politically ambitious mayor. If the worst thing I can say about the head of my city is that he has big dreams, well, I'll take him over others who abuse their power any day.

However, problems arise when political goals collide with real world responsibility, as it has done on numerous occasions for Villaraigosa and as it did Monday night. When a portion of your city is lit with burning embers and thousands of residents are forced to flee from their homes, their leader should not be exulting with the fortunate others who are lucky enough to take in a ball game.