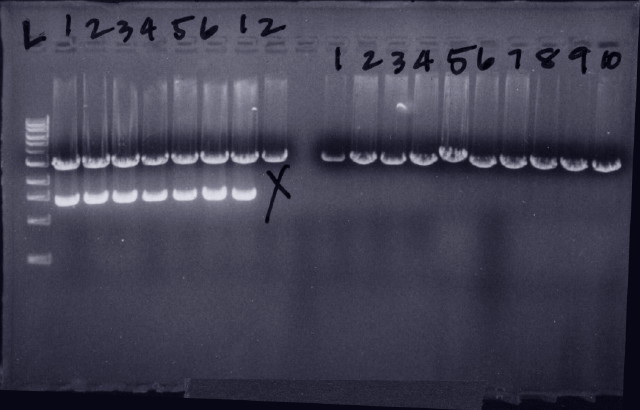 LAist’s freshly minted Ph.D., Melissa, is stepping out of the lab to bring you Scient-IST. Our resident expert will give you the inside scoop on health, science and breaking research.

In honor of Breast Cancer Awareness Month, our kick-off columns will focus on the latest in breast cancer studies, activism and more.

Who says scientists can’t be celebrities? They’ve got cool gear (PET scanners), adoring fans (Big Pharma), big money prizes (ahem, Nobel), and in the case of world-renowned oncologist and UCLA professor Dr. Dennis J. Slamon, a book memorializing their life’s greatest scientific achievement (to date) penned by NBC News Chief Science and Health correspondent Robert Bazell: HER-2: The Making of Herceptin, a Revolutionary Treatment for Breast Cancer. In traditional Hollywood fashion, the movie adaptation followed (2008’s Living Proof for Lifetime Television), with Harry Connick, Jr. in the title role. Not bad for someone who spends the majority of his time in a laboratory with over-caffeinated grad students instead of between the pages of US Magazine, right?

The story of Slamon is really the story of Herceptin (trastuzumab), the drug that changed the breast cancer treatment landscape for thousands of women. If we liken the body to a meticulously planted garden, with the cucumbers and corn and carrots all growing in their carefully spaced rows, then cancer is the tomato plant that has gotten the hell out of control, its tangled vines and over-zealous fruit consuming the water and soil at the expense of the rest of the crops. If you spray the entire garden with pesticide, you'll probably kill the mutant tomato plant, but you'll likely take everything else down with it, much like chemotherapy and radiation's widespread effects on normal and cancerous cells alike. Imagine, then, if you could figure out what makes the cancer cells different from the normal cells around them, and find a way to mark just them for destruction.

As any researcher will tell you, this is easier said then done. Not all cancers are the same, even within the same organ, and so researchers turn to biomarkers (biologic identifiers of a disease state) to differentiate between seemingly identical cancer groups and tailor drug treatment and monitoring regimens accordingly. Such was the case with breast cancer. In 25-30% of reported cases, the human epidermal growth factor receptor 2 (HER2) gene is amplified, causing overexpression of its protein product. Initial studies indicated that having more than normal of this protein correlated with shorter overall survival rates, so Slamon and colleagues set their sites on creating an antibody to bind and inhibit its function in cancer cells. Ten or so years later, Herceptin was born, eventually becoming the first line of defense for HER2 positive women with metastatic breast cancer, either alone or in combination with chemotherapy. For women diagnosed with this disease and their family, friends, and loved ones, this drug means More Time. If Slamon does nothing else with his research from here on out but give women more time to be mothers, wives, daughters, sisters, girlfriends, teachers, lawyers, doctors, artists, writers, human beings, isn't that a career well spent? A true rockstar, indeed.

So where does one go from here? For all the hours spent reading complicated textbooks to obtain multiple degrees, growing sallow from extended periods of time under fluorescent lighting, scientists tend not to squander fame and fortune on drugs and women (unless of course they relate to clinical trials). A quick Pubmed (or Youtube) search finds Slamon still very much in the thick of it; cancer doesn't like to rest on its laurels, apparently. With ongoing research, a fight to champion changes in clinical trial requirements to include more eligible women, and a fundraising agenda that includes the recent Stand Up to Cancer event, it doesn't seem like he's slowing down anytime soon. A stroll down the hallway of UCLA's Molecular and Medical Pharmacology Department, not far from Slamon's own lab, begins with a framed quote by another visionary, Dr. Michael Phelps: "To enter here, you must have a good idea". For scientists attempting to better understand a complicated disease in the face of dwindling funds and bureaucratic red tape, it's clear a good idea is just the beginning. Perhaps scientist-as-celebrity should be a mainstay in our collective consciousness, a means to bring much needed attention to the public health issues that affect and ultimately determine our fate.