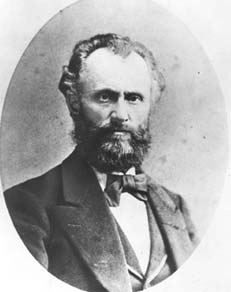 The name "Baldwin" shows up here and there around the City and County of Los Angeles, like in Baldwin Hills, or on Baldwin Avenue, which runs from El Monte through Temple City and into the foothills in Sierra Madre. Well the Baldwin in question is Elias J. "Lucky" Baldwin, a man who made a name for himself as a real estate maven and as a bit of a wild card in the late 1800s and early years of the 20th Century. His name—and some, say his ghost—still lingers, as do some of the places he built over a century ago.

LAist first had a glimpse of Baldwin when we headed down to Baldwin Hills for our Neighborhood Project, where our background info on the man kept us in the stables: "Elias Jackson "Lucky" Baldwin was a legendary horse breeder and racer whose steeds captured just about every major racing title in existence during his late 1800s heyday [and] was one of the first breeders in America to stress speed over stamina in his horses, a trait that is now standard in California thoroughbreds." But Baldwin's love of horses, although legendary, is just a part of his bio.

Baldwin hailed from Hamilton, Ohio, and cut his teeth in the hotel and mercantile business when he ran an establishment in Indiana in the late 1840s. A bit nomadic in childhood and as a young man, Baldwin moved with his wife Sarah and daughter Clara first to Racine, Wisconsin, then made the long trek westward, with stops in Salt Lake City and San Francisco among many, many others, along the way. Baldwin managed to make the arduous, and often dangerous, six-month trip profitable, as he sold extra horses to pick up cash.

The Baldwins settled in San Francisco and had two more children, both of whom died; the daughter at just over a year old, and the son only two weeks after birth. The next ten years were rough, and saw many of Baldwin's business start and stop all over the west. His wife divorced him, and he remarried in 1869, right around the time he earned the nickname "Lucky" when stock he thought he'd sold off actually stayed in his name long enough to see a bonanza spike and make him a multi-millionaire.

Baldwin continued to build and operate hotels in California, but it was the Santa Anita Racetrack here in Arcadia that allowed him to share his love of horses and racing with the masses. He was passionate about thoroughbreds, and not only enjoyed the sport as spectator, but also as an insider, as another biography explains, Baldwin:

bred and raced some of the best horses in the country and won nearly every major stakes race of that era. He won the American Derby at Washington Park -- then the most prestigious three-year-old race in the country -- four times: Volante (1885); Silver Cloud (1886); Emperor of Norfolk (1888); and Rey el Santa Anita (1894). In the 1894 American Derby, Rey el Santa Anita handed the great Domino his first defeat.

It was only natural that he build a showplace for his beloved horses. 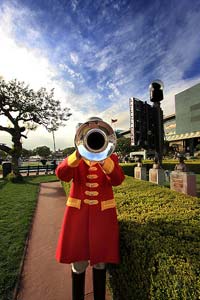 Baldwin's legacy is indeed tied to the racetrack, but also to the horses who still race today:

Probably his best horse and sire was Emperor of Norfolk, who carried Baldwin's famous black-and-red maltese cross silks to victory in 21 of 29 races. (Note: A large maltese cross from Baldwin's estate can now be seen just east of Seabiscuit Court in the grandstand gardens of Santa Anita Park. The names of many of Baldwin's stars are also listed there. Another note: The Norfolk Stakes [Gr. II] is now the major two-year-old stakes race at the Oak Tree at Santa Anita meeting.) After retirement from the racetrack, Emperor of Norfolk sired many major stakes winners.

Sadly, the Emperor of Norfolk "died in his stall on the evening of opening day at old Santa Anita." 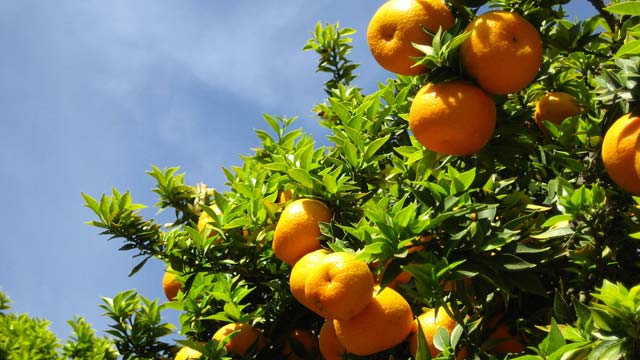 Most of the area was covered in fruit trees; this is an orange tree on the property of the LA Co. Arboretum, once Baldwin's estate | Photo by ankarino via Flickr

What we know as Santa Anita racetrack opened in 1934, almost 20 years after Baldwin was long gone, but it was on the same land where Baldwin had once operated a racetrack. The land was initially the Rancho Santa Anita (USC's Digital Archive has a photo of sheep grazing there in the 1890s) and in 1907 Baldwin built a track and stands for horse racing. Baldwin had Santa Anita to himself, essentially; an article from the LA Times in 1882 calls the area his "princely estate" and its proximity to the miles and miles of fruit farms eastward to San Bernardino, and the growing community of Pasadena to the west ("Crown of the Valley" Mar. 9, 1882). A 1908 photo attests to the splendor of what we now call "Old Santa Anita" (in contrast with the current track, sometimes called "New Santa Anita" as distinction, though for many, or, frankly all, of us, there has been no other.

As the 19th century was coming to a close in Los Angeles, EJ Baldwin was building. He suffered setbacks when the hotel bearing his name in San Francisco burned down, but he recouped some monies by selling the land, and continued to invest in properties in Southern California, particularly hotels. One of his properties was the Hotel Oakwood, located at 1st and St. Joseph Streets in Arcadia. According to the City of Arcadia, it was a grand hotel: "Its ornate design and second story veranda exemplified the architecture of that time period. Each of its thirty-five elegantly appointed rooms had gas, hot and cold water, and a fireplace." Fire proved to be a foe of the financier, as it, too, burned down--faulty wiring caused the flames, in 1911.

As much as Baldwin was known for land ownership and a love of horses, he was also known for loving women and attracting scandal. An online biography of "Lucky" proves he was perhaps less fortunate in love:

His new wife [Jennie, whom he wed in 1879] sickened suddenly and died on November 16, 1881, in their suite at the Baldwin Hotel. After Jennie's death Lucky continued to live a fast life and was involved with a number of other women. On May 20, 1884, he married Lillie Bennett, but the scandals continued. Lillian Ashley accused Lucky of having fathered her child and took him to court. During one of Lucky's court appearances Lillian's sister, Emma Ashley, seated directly behind Baldwin attempted to shoot him in the head. She missed. The court decision stated that Baldwin's reputation as a womanizer was well known and that there was evidence that Lillian was aware of it. 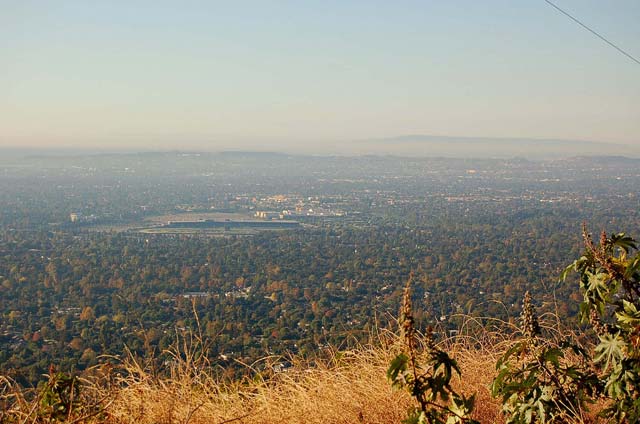 All of this land, including present-day Santa Anita Racetrack, belonged to Elias J. Baldwin in the late 19th/early 20th centuries. Here's the view as we see it today from Mt. Wilson | Photo by Zeetz Jones via Flickr

Baldwin owned over 60,000 acres of land in the San Gabriel Valley, and we now know it as the cities of Arcadia, Monrovia, Sierra Madre, and Temple City. Most of his estate and residential buildings are now part of the Los Angeles County Arboretum, so we can still appreciate the beauty of what was once vast and unpopulated land. Their website includes a great deal of historical information about the land and its owner, including Baldwin's relationship to the precious commodity of water:

When Elias Jackson "Lucky" Baldwin purchased Rancho Santa Anita in 1875, he acquired not only the natural lakes and cienegas on the property, but water rights in both Big and Little Santa Anita Canyons just north of his homesite. The Baldwin Ranch was situated on a 2,000 acre artesian belt, a benefit of its location atop the Raymond Hill Fault. Sixty percent of Baldwin Ranch irrigation waters came from artesian sources, the remaining 40 percent from canyon waters. Baldwin Lake, which served as a holding reservoir for ranch irrigation projects, was dredged and deepened, perhaps 12-15 feet, by owner Baldwin in the late 1880s, and a retaining wall, capped by granite boulders, was constructed around the lake edge. 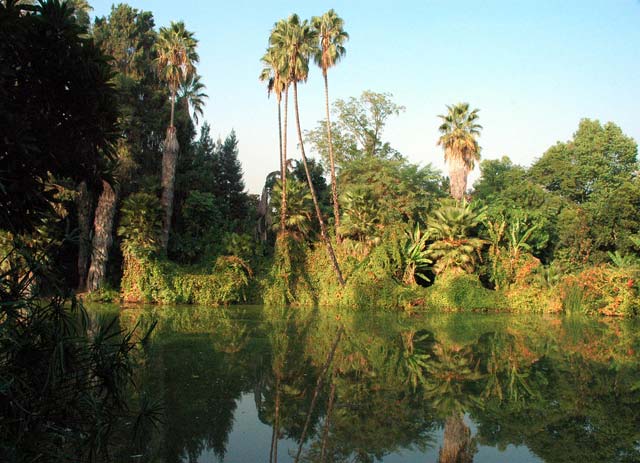 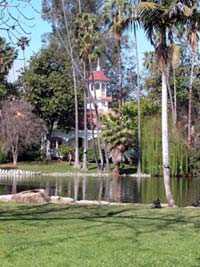 It's entirely possible you've seen Baldwin Lake without ever having set foot in Arcadia:

Johnny Weissmuller swam in LASCA Lagoon/Baldwin Lake for three decades as Tarzan and later Jungle Jim. A local news story reported that he, in fact, set an unrecorded Olympic swim record when a cage of crocodiles was accidentally opened during filming (Weissmuller beat the crocs to the lake shore). Bob Hope, Bing Crosby and Dorothy Lamour took up a month-long watery Baldwin Lake residence in homes on stilts for the filming of Road to Singapore in 1939, the same year the Douglas Fairbanks, Jr.,/Madeleine Carroll film Safari managed to sink a paddlewheel boat in the same lake. Undaunted, television's original "Fantasy Island" lowered a pontoon plane by helicopter onto Baldwin Lake and propelled it across the water to disembark visitors to Mr. Roark's island paradise. For Alex Haley's "Roots II", Baldwin Lake became Kunta Kinte's river home in Africa.

All of the land's celebrity on the big and little screen came, of course, years after Baldwin left the earth. He died of pneumonia in 1909, and is buried in San Francisco next to his first wife. But some say his ghost haunts the buildings of the Arboretum, as these videos explore: 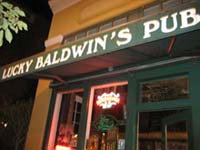 If you want to find out if you can find Baldwin's spirit, you can head to the Arboretum, or celebrate the legendary lover of ladies, horses, and good old fashioned land-owning capitalism, with spirits--of the brewed kind, that is.

You can head over to Lucky Baldwin's pub in Pasadena and hoist a pint or two in his honor (LAist did, a couple of years back), and dazzle your drinking buddies with everything you just learned about the man behind the name. 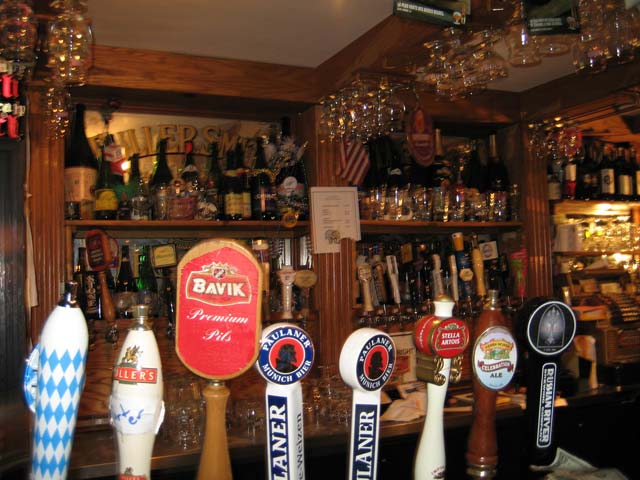 Lucky Baldwin's in Pasadena by Ruth L via Flickr

Val Verde
Thelma Todd's Roadside Cafe
An eclectic house in Beverly Hills
Echo Park's Bonnie Brae House
Marineland of the Pacific
Grand Central Air Terminal
LA's Own Wrigley Field
How LA got its name
The wreck of the Dominator
The 1925 "Hollywood Subway."
The Pink Lady of Malibu
Lions Drag Strip
Disneyland...when it was cheap to get in
The ugliest building in the city
Union Station
Union Station's Fred Harvey Room
A Smelly Mystery at another train station
The Egyptian Theatre
Pilgrimage Bridge
The "It" Girl, Clara Bow