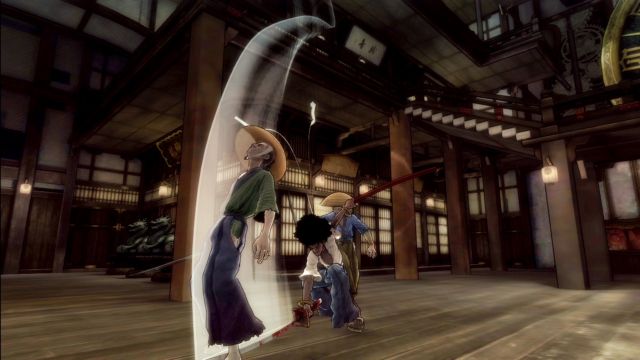 We gotta love when our pals in the gaming industry invite us to check out their latest suite of titles. Since the season is creeping slowly upon us various companies like to invite the press to various events to check out some games for a pre-holiday push, and with free booze and food you can bet LAist was there. This week’s event was held at the Standard in Hollywood by our buddies at Namco/Bandai, publishers of such big named titles as Soul Calibur IV and Tekken and classics like Pac-Man, and Galaga. The night was filled with mine shaft rides, cheerleading, and ninja slashing, all within the confines of the swanky Sunset Strip hotel. Check out more pics and reviews after the jump.

Namco/Bandai’s piece de resistance for the holiday season is the adaptation of popular anime series Afro Samurai. With character voiceovers by Samuel L. Jackson, Ron Pearlman and a musical score by RZA, the story follows a quiet and determined ninja and his loudmouth hanger-on seeking the fighter who killed his father for the “Number One Headband”, a label of god-like stature. The beautifully illustrated series is perfectly translated to the video game disc as your character relays the story in a third-person level/environment-based game. The slick cell shading and hack n’ slash gameplay mechanics provide a highly entertaining and immersive experience; perfect for any fan of the manga series.

For those of us who squeal with glee every time a silly new Wii game comes out, Namco has got you covered. After a substantial amount of wine we were directed towards the Nintendo setup to check out We Cheer, a cheerleading game that utilizes two Wii-motes to simulate the failed high-school dreams of being the most popular girl in school. All snark aside, We Cheer is nothing less than fun. Following the directions of the cheer captain, players are expected to flail, twist, and jump their way to the top of the pyramid all while dancing to a pretty catchy soundtrack (including tracks by The Go! Team, the Ataris, and many more.) 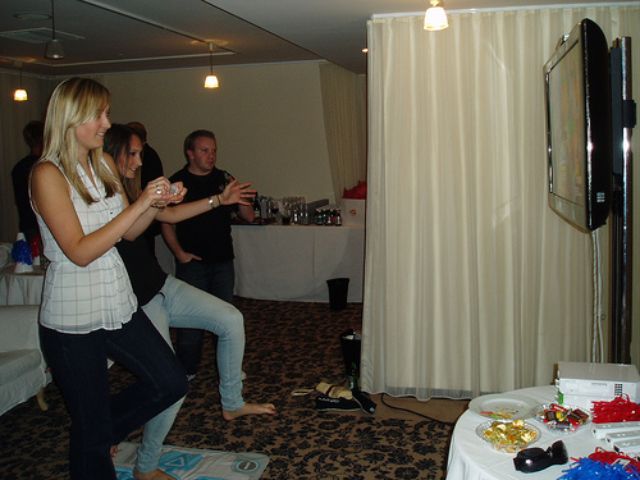 As the writers got drunker and the cheers got more complicated, the final (and the most mobility-dependent) game was busted out, floor mat and all. Active Life: Outdoor Challenge is the closest simulation of going outside and getting some fresh air and exercise as possible. We’ll resist our temptation to yell “just go play outside” considering the fact that it’s a great rainy day alternative. A lighter, less fitness-based version of Wii Fit, Outdoor Challenge includes games like mine cart rides, kayaking, and whack a mole, all of which require various movements aimed at making players break a sweat. The DDR-inspired mat allows for sensors to gauge our balance and jumps, both of which were put to the test during our event after a couple glasses of red wine. At the end of the night, as we wrapped up drunkenly stumbling around the hotel room doing cheers and zapping falling rocks, we felt like we never had a better time drinking and exercising at the very same time.