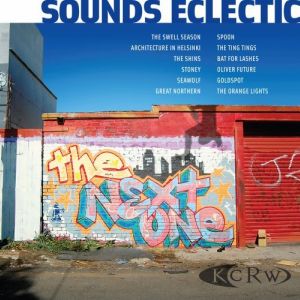 Stoking the flames of independence, KCRW released its latest compilation album from live Morning Becomes Eclectic performances cut from twelve different in-studio acts. Crowd pleasers like The Shins and The Swell Season imbibe the album with not so new takes on their even older songs while Spoon and Indie Brits, The Orange Lights dig deep into their live repertoire to deliver interesting versions of their already strong songs.

It is an album awash in such bifurcation and a study on MBE, what it has become and the trajectory of its annual compilation CD's.

Perhaps the biggest knock against the show is that it is not actually eclectic. For three hours each weekday morning, host Nic Harcourt spins some of the latest tracks from the indie world. He does deserve credit for rewriting the zeitgeist on multiple occasions and introducing the world to Franz Ferdinand, Jem and Coldplay (take of them of what you will, but they have soared to great new heights with the aid of MBE.)

MBE still vibes with life and continues to seek new acts that break down musical barriers. It's Fresh New Thing approach has resulted in recent fame for The Duke Spirit and helped launch Great Northern and Sea Wolf, two LA-bases bands with cuts on the The Next Ones, MBE's sixth compilation album.

The first compilation album, which debuted in 2001, was truly a feast for eclecticism. It featured world renowned cellist Yo-Yo Ma playing his masterpiece version of Bach's Prelude, Shivaree (!) with a slyly amazing performance of "Goodnight Moon," Willie Nelson singing a naked version of his "Healing Hands of Time." The Dandy Warhols, Beck and Badly Drawn Boy were also featured prominently. With a dash of classical, a pinch of good ol' country music and smooth indie rock, KCRW's Sounds Eclectic was true to its name.

A year later, some of the same musical divergence was evident on Sounds Eclectic Too, but you could sense that this brand of live CD and maybe MBE was going in a certain direction, and it wasn't to appease different musical tastes.

Six years later, the transition is complete. The Next One is a greatest hits album for indie rock fans; it is a collection of singles from popular and hidden bands that works on multiple levels and fails at others. If you are a fan of indie, a fan of KCRW there is not much to drive you away from this album. But if you are seeking an eclectic CD to introduce you to new sounds or reacquaint you with different genres, turn around and head somewhere else.

The Shins' "Australia" is a perfect example. You all know the band and, I'm sure, the song by this point. After all, the album was released 20 months ago and the song was the second single that permeated the radio and television for months. In itself the song is vintage Shins, but so is this performance, and that is too bad for KCRW. The Shins' greatness is tied to its knack for writing great and catchy pop songs that seem to percolate in our minds for months on end. But they have not yet mastered the live performance as most of their songs in concert (or in studio) stay close to the original material - as is the case with this tired version.

The Swell Season's "Falling Slowly" also falls into this pratfall and suffers from an exhaustive case of over exposure. Beginning The Next Ones with this song, which, at one point, you may have heard 20 times between waking up and going to the bathroom, is a curious choice. It is as if Harcourt and Co. are desperately trying to stay ahead of the game by presenting what they consider to be new and fresh - but month's late. Or worse, they know it is tired and are are acknowledging right off the bat that this album does not actually present anything new.

Which is a shame because there are a slew of cuts from local and overseas bands that jump from the speakers and scream eclectic. Architecture in Helsinki's "Heart in Races" represents the eclectic portion of the album while Oliver Future's "Stranger than the Stranger" shines with L.A. soul and The Orange Lights' "Life is Still Beautiful" is an exciting British import.

But they have a tendency to play hide and seek with the album's easy listening cuts. The album is awash in too smooth wannabe eclectic that do have their place on MBE, but not not on an album that aims to represent divergent music sounds.

You can purchase the album here and watch Oliver Future's "Stranger than the Stranger" below: