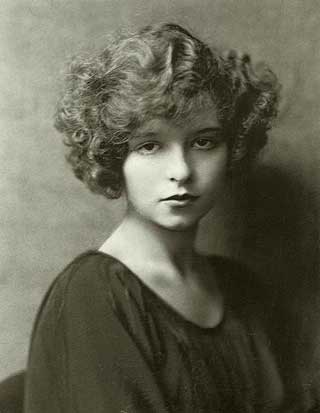 We talk about "It" girls in this town. There's a new flavor every week. It could be Mischa Barton, Scarlett Johansson, or Sienna Miller. We all kind of know what that means. A young starlet, largely untried but definitely gorgeous and sexy. But did you know that the phrase comes from one "It" girl? The original was the one and only Clara Bow.

Clara Bow was an original Hollywood legend; born into the tenements of Brooklyn, she broke through the class barriers to become a star. In case you thought Leighton Meester had it tough, Clara's mother was a mentally ill, occasional prostitute, and her father was abusive and seldom around. When she was born, her mother didn't even bother calling a doctor because her first two babies had died, so Clara never had a birth certificate. Her only friend died in her arms when she was 9 years old. (When she wanted to cry voluntarily, she thought of the song "Rockabye Baby" because his mother sang it to him.)

She used movies to escape (didn't they all back then?), and when she found out about Motion Picture Magazine's "Fame and Fortune" contest in 1921, she entered. She won, even though her part in the film, Beyond the Rainbow, ended up on the cutting room floor. Her mother told her that being an actor was basically prostitution and threatened her with knives.

Already a star from such films as The Plastic Age and Man Trap, Bow's most notorious role was in It, based on the book of the same name by Elinor Glyn, who personally chose Bow for the part. At that time, "It" meant a woman of the times, newly liberated, it was intimated that the main character enjoyed sex, though she slaps her date after a kiss. According to the film, "it" is " "that strange magnetism which attracts both sexes...entirely unselfconscious...full of self-confidence...indifferent to the effect...she is producing and uninfluenced by others." Dorothy Parker famously snipped "It, hell, she had those." Clara herself was as freewheeling as her alter ego, but without Victorian hang-ups. She was romantically linked with Bela Lugosi, Gary Cooper, Gilbert Roland, director Victor Fleming and John Gilbert.

Despite her full dance card, real life Clara was shy and reclusive. She famously preferred playing cards with her driver, maid and cook to lavish parties.

Still, her racy reputation wasn't always a boon. Word spread and soon midwest moralists were calling Bow "a lowlife and a disgrace to the community." There was even a widespread rumor that she had slept with the entire USC football team (there was no truth to it).

Though she was a huge star, she gained a reputation as being difficult to work with. She was mentally unstable, did drugs and drank copiously. Still, she was worth putting up with -- she won an Oscar for her role in Wings in 1927 and between then and 1930, she was in Paramount's five biggest money makers.

But then the talkies came. Clara, with her strong Brooklyn accent, had a bad feeling about them. She experienced panic attacks on set, and was constantly distracted by the boom. In 1933, she gave up films to settle down with her husband, Rex Bell, former actor and politician. They had two sons. While he was running for House of Representatives in 1944, Clara tried to commit suicide. She was diagnosed with schizophrenia and given shock therapy. After that, she lived out her days quietly (or at least without incident), dying of a heart attack in 1965.

Being the "It" girl was both a windfall and a curse for Clara Bow, in a time when the phrase was as controversial as it was complimentary, it certainly didn't do her any favors. She said, "Even now I can't trust life. It did too many awful things to me as a kid."

LAistory is our series that takes us on a journey to what came before to help us understand where we are today. So far we've been to Val Verde, Thelma Todd's Roadside Cafe, a house in Beverly Hills, Echo Park's Bonnie Brae House, Marineland of the Pacific, and Grand Central Air Terminal, Wrigley Field, the moment LA got its name, the wreck of the Dominator, 1925 "Hollywood Subway." the Pink Lady of Malibu, the Lions Drag Strip, to Disneyland (when it was cheap to get in!), what might be the ugliest building in the city,Union Station--and back again to check out the Fred Harvey Room,to another train station...and its mystery, the Egyptian Theatre, and Pilgrimage Bridge.