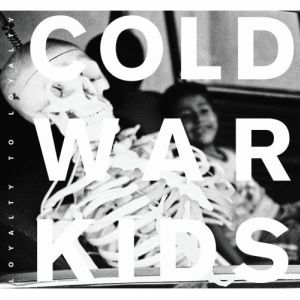 In considering the Cold War Kids' latest offering, Loyalty to Loyalty, it is best to start from the beginning. On the strength of three incredibly energetic and raw EPs — accompanied by live performances that kicked the doors down of Spaceland, the Echo, etc. — the band rose from relative obscurity to headlining mid-major sites and spots on national television.

Packed with soul and brimming with originality, the three mini albums seemed to be harbingers of great things to come. The Kids were poised to break on through. But Robbers Cowards, the first full length that was released in 2006 was an overproduced work of middling art that seemed tired after everyone already knew most of the songs and Loyalty to Loyalty, out Tuesday, is a stale sendup that fails to gather much steam as it meanders through 13 tracks, most with different intents and purposes that clog 45 minutes of sound into one spectacularly average album.

One of the great things about the CWK is their blistering originality; many songs sound like they belong in a blues bar with lead singer Nathan Willet's voice sounding like a unique instrument unto itself. Indeed, the CWK sound works best when it is working in concert with Willet's falsetto rather than against, as is is the case on a number of tracks on Loyalty, including "Mexican Dogs" and "Something is Not Right With Me."

Other weaknesses included a seeming uneasiness with wrapping up songs cleanly. Album opener "Against Privacy" saunters through with lazy guitar and bass lines and Willet's thematic story telling until he calls off the lyrical mess to give way to a chaotic musical jumble which concludes the song without any clear purpose or voice.

That element is a theme we have seen on many CWK songs, including "We Used to Vacation" -- a great song from earlier albums that could have been a classic if only they had chosen to actually end the song properly instead of throwing all the instruments on the speaker. But originality is in short supply on the newest album, something we should have realized when listening to "Against Privacy," where the first line of the song and of the album is, "We don't gamble".

Still, there are a few classically endearing CWK songs that force you to realize why you loved this band in the first place. "Every Valley is Not a Lake" works on multiple levels; it is inventive, it is original, it is the CWK we know and love. "Golden Gate Jumpers" is a soulful companion piece to "St. John" with a wonderfully dirty production value of a blues bar on the south side of town. Willet's piano tinkling, with the slow beauty of guitarist Jonnie Russell sells the song.

Album highlight "I've Seen Enough" is the poster child for what makes CWK work: each artist, including drummer Matt Aveiro and bassist Matt Maust, gets to show off their own individual skills, but mostly each works for the greater good of indie rock and roll.

Ultimately, though, the album falls short of its intended effect. Loyalty, like the band itself, generally finds itself knocking on the door of greatness without actually turning the knob, painfully evident on album closer "Cryptomnesia." It builds and builds with excitement with Aveiro's crashing beats and Russell guiding us up Mt. Rock. Then, Willet comes in, offers us a few parting words and pulls a Keyser Söze. In the end, Shakespeare is best left summing up Loyalty, an album full of sound and fury, signifying nothing.

CWK are playing the Fonda Wednesday. Tickets are still available via Ticketmaster.