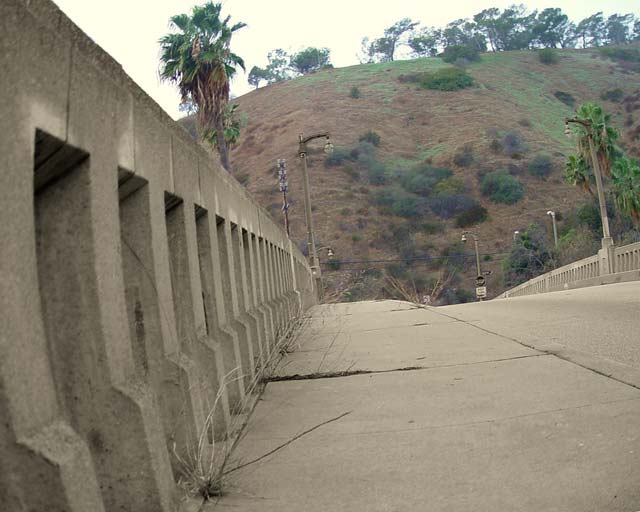 Photo of Pilgrimage Bridge via Historic Bridges of the United States

Recently there was a brief news item on LAist (and some ensuing traffic headaches) about some construction materials spilling onto the 101 Hollywood Freeway near the Pilgrimage Bridge. Sure, most of us have driven through the Cahuenga Pass on the freeway or northbound on Cahuenga or southbound on Highland and have passed the Bridge, or we've crossed it—maybe en route to the Bowl or the Ford Ampitheater—without a second thought as to how the bridge came to be, or how it got its name. Turns out, there's a lot of history there in the Cahuenga Pass tied to the Bridge, the Ampitheater, and that cross that sits high up on the hill above the 101 Freeway.

To really get a sense of place, we'll have to go back to the early 19th century, when the swath of land we whiz through in concreted lanes in our hybrid cars yakking on our Bluetooth-ed cellphones was far more raw and wild. The area saw two major battles between locals and those who represented Mexico's interest in the land. The first, in 1831, called the Battle of Cahuenga Pass was "a fight between local settlers and the Mexican-appointed governor and his men" and resulted in two deaths. The second, in 1845, is called wither the Battle of La Providencia or Second Battle of Cahuenga Pass in 1845 and was "between locals over whether to secede from Mexico; one horse and one mule killed," according to the Cahuenga Pass Property Owners Association (CPPOA). Both happened on the Valley side near where Studio City is today, and apparently "cannonballs are still occasionally found during excavations in the area." (Check out LAist's in-depth look at the Campo de Cahuenga for more information about the area and its rich history.)

Fast forward almost a century, and the landscape had changed radically. Now the vital artery linking the ever-burgeoning area of Hollywood to the verdant and prosperous San Fernando Valley, the Cahuenga Pass was targeted for a transportation makeover.

In the 1930s, a new public works project became the focus of then City Engineer Lloyd Alrich. He and his team had their eye on the Cahuenga Pass, with the desire to create a Parkway for automobiles. Aldrich was the man for the job:

He and his capable staff had developed quite a reputation for designing and building major public works projects. During the period from 1925 to 1932 they had built (or rebuilt) the numerous beautiful bridges over the Los Angeles River and the Arroyo Seco. Between 1931 and 1935 they built the four Figueroa Street tunnels through the Elysian Hills. They had demonstrated their skills in designing attractive major roadway projects in undeveloped natural settings and directed their experience in developing a parkway concept for the Cahuenga Pass. [LA City/LA DOT history]

Aldrich came up with an innovative plan for an eight-lane highway with a barrier place between the north-south lanes incorporating the tracks used by the Pacific Electric Railroad cars, which were at the height of their popularity and usage at the time. Cahuenga Boulevard was designated as the service road to the west, and plans were made for bridges to span the new parkway and connect to Cahuenga Boulevard. Three bridges were part of the plan, one each "at the Pilgrimage (now John Anson Ford) Theater, Mulholland Drive and Barham Boulevard." Construction began in phases, and continued over the next several years. 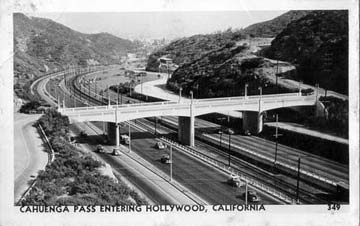 On June 15th, 1940, the first phase was completed. Phase One included construction "from south of the Hollywood Bowl, near the intersection of Highland Ave. and Cahuenga Blvd., north to about Hollycrest, including the Pilgrimage Play Bridge and the Mulholland Highway Bridge," according to the CPPOA. By the end of 1940, Phase Two, which involved building roadways "specifically from 440 feet south of the Mulhooland Highway Bridge to 940 feet north of Barham Blvd., including the Barham Bridge and all ramps, retaining walls and structures in connection with it," was completed.

But this still doesn't address why this one bridge--the Pilgrimage or Pilgrimage Play Bridge--wasn't named for a street or a person. It was, in fact, named for a place and the event the place was exclusively created for.

In the teen years of the 20th century, a woman described as a theosophist, heiress, and patron of the arts from Philadelphia, named Christine Wetherill Stevenson, became active in the creative community of Hollywood, which was just beginning to take root and thrive, particularly in the hills. Stevenson had enough money to be able to pair up with Mrs. Chauncey D. Clark, and purchase the land on either side of the Pass where present-day landmark theatres the Hollywood Bowl and the John Anson Ford Ampitheater now sit. Stevenson, in fact, was on the original board of interested parties who were making plans to build what would become the Hollywood Bowl; she is described as one of two patrons "pre-eminent among the early leaders" and that "it was her activities on behalf of a proposed cycle of seven plays about religious prophets that led to the formation of a theater association and, ultimately, the purchse of the property on which the Bowl was developed," (Henken).

But all was not agreeable between Stevenson and the association hoping to build an ampitheater in the Hollywood hills. The group did not want the theater to be used exclusively for religious performances, and the rift was severe enough to lead Stevenson to split from them and make plans of her own. She went as far as the other side of the Cahuenga Pass, and came up with a project of her own. 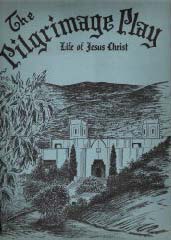 Her project was to build her own ampitheater and to put on the religious play she herself had written, called The Pilgrimage Play. The original venue on the property was built in 1920 for the performance of her play, and Stevenson "believed the rugged beauty of the Cahuenga Pass would provide a dramatic outdoor setting for the play," (Ford Ampitheater). The structure was wooden, and was used for performances of the play every summer from 1920 to 1929, when a brush fire destroyed the theater. (To see photos of the Pilgrimage Plays being performed here in Hollywood from 1920 and 1927, visit The Bruce Torrence Hollywood Collection online.) It was, of course, called the Pilgrimage Theater. You will, of course, know the theatre and its location by its present name, the John Anson Ford Ampitheater. 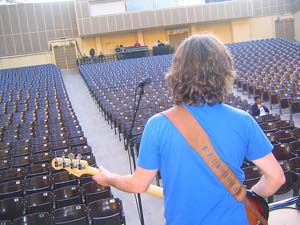 Sadly, though, Stevenson did not live to see her ampitheater to become legacy in the area. In fact, she died very unexpectedly in 1922, just two years after her theater was built. Following the 1929 fire that claimed her wooden structure, the theatre was rebuilt, and still used for religious performances for more than 30 years. The history of the Ford includes this information about the venue's early years:

The present theatre, constructed of poured concrete and designed in the style of ancient Judaic architecture to resemble the gates of Jerusalem, was built on the same site and opened in 1931. The Pilgrimage Play was again performed here until 1964, interrupted only by World War II, when the structure was converted to dormitories for servicemen. In 1941 the land was deeded to the County of Los Angeles. The Pilgrimage Play continued to be presented until a lawsuit in 1964 forced its closure because of its religious nature.

The theatre is named for the late County Supervisor John Anson Ford--who, incidentally, lived to be 100. 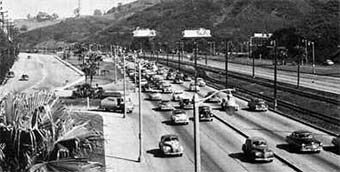 Meanwhile, following the completion of the Cahuenga Parkway in the 1940s, Hollywood was rapidly changing. The City's history of the road projects here explain the events of the time, and how the roads many of us travel on now came to be:

While the last phase of the Cahuenga Parkway was being completed, work already was underway on building the Hollywood Freeway. The last segment of the freeway, built in 1954, connected to the south end of the original Cahuenga Parkway. The completion of the Hollywood Freeway necessitated the demolition of the 1940 tunnel connection under the Pacific Electric Railroad tracks between the Pilgrimage bridge and Odin Street. In addition, since the Pacific Electric Railroad had ceased operation in 1944, the area that it had occupied in the median was reconstructed to accommodate traffic from northbound Highland Avenue. In 1957, when the Hollywood Freeway was extended northwesterly of Lankershim Boulevard, the northbound on-ramp, northbound off-ramp and southbound on-ramp at Barham Boulevard were abandoned. The abandoned ramps have remained preserved since that time.

Reminders of Stevenson and her play echo threefold now in the Cahuenga Pass. The first, of course, is on the site of her ampitheater, where in 2005 the Cornerstone Theater Company concluded its 4-year series of plays "addressing how faith unites and divides Los Angeles" with the performance of "A Long Bridge." The play was presented as a modern interpretation and reaction to Stevenson's original play, as described by its author, James Still: “The way we start is with the entire cast coming out as ghosts from the original 1920 ‘Pilgrimage Play,’ [...] They think they are there to perform their show, but they realize that the world has changed. So they decide to perform a new ‘Pilgrimage Play,’ incorporating all of these faiths," (Daily Breeze via Aldrich PR).

The second, of course, is the Bridge itself, so named for its service as connection to the service roads over the Cahuenga Parkway/Hollywood Freeway leading to the site of the one-time Pilgrimage Theatre. Some facts about the Bridge (via Historic Bridges of the United States):

The third tribute to Stevenson happens to be both iconic and religious--fitting, when considering Stevenson's role in local history. The cross on Cahuenga lacks an official name, and is frequently just referred to as described. 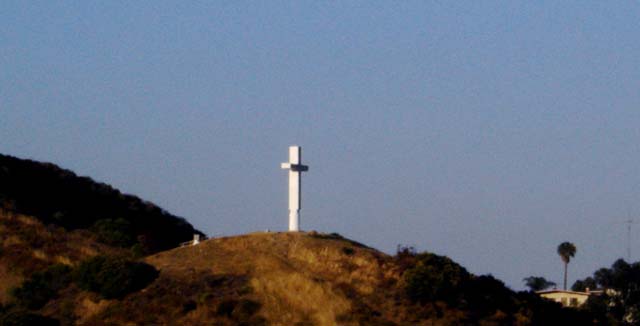 Blogger Hope Frances explains the connection between the cross and Stevenson's Pilgrimage:

When she died in 1922, Christine Wetherill Stevenson was remembered with a stone cross, which stood atop the hill over-looking the Pilgrimage Theater. [...] [Following the 1929 fire and the 1931 reconstruction of the theatre t]he cross stood tall and was lit only during Easter when the "Pilgrimage Play" was performed. The public soon grew to appreciate the cross illuminated at night.

For a while, Southern California Edison footed the bill that kept the cross lit. Then in 1941 the cross was given to the county and the Pilgrimage Theater was renamed the John Anson Ford Ampitheatre. [...] [In 1965] the cross was damaged by fire and was replaced by a new cross, made of steel and Plexiglas.

By 1980 church and state politics again got in the way of the county's support of the cross. This prompted Hollywood Heritage to step in and purchase the site. Within four years the cross suffered the detrimental effects of vandalism, followed by a windstorm, which knocked it over.

The following year, 1985, volunteers erected a new cross 17-feet in height. In 1993 High Adventure Ministries built the current cross standing 33 feet tall. Finally, in 1997, the Church on the Way took over the care and maintenance of the cross on the Cahuenga Pass.

Prepping for a performance onstage at the John Anson Ford Amiptheater by mockstar via Flickr.

LAistory is our series that takes us on a journey to what came before to help us understand where we are today. So far we've been to Val Verde, Thelma Todd's Roadside Cafe, a house in Beverly Hills, Echo Park's Bonnie Brae House, Marineland of the Pacific, and Grand Central Air Terminal, Wrigley Field, the moment LA got its name, the wreck of the Dominator, 1925 "Hollywood Subway." the Pink Lady of Malibu, the Lions Drag Strip, to Disneyland (when it was cheap to get in!), what might be the ugliest building in the city,Union Station--and back again to check out the Fred Harvey Room,to another train station...and its mystery, and to the Egyptian Theatre.