OMG: Meghan McCain is in LA! 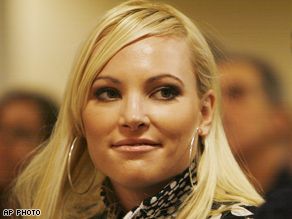 For a while we couldn't pay them to visit Los Angeles and now we can't get rid of them. Fresh off a visit by her father, Sen. John McCain, Meghan McCain will be showing off her newest ode to literature tomorrow when she reads, signs and talks about her recently penned children's book "My Dad, John McCain" at two exalted outposts of Republicanism: The Americana at Brand and then at USC.

The first stop will be in Glendale's Barnes & Noble at the Americana. Sure, you say, the Americana is just a mall; why must you find politics under every rock? Fair point, except that Americana developer Rick Caruso has given handsomely to the Republican party this election cycle and USC is, well, bathed in the stench of elephant dung.

Mme. McCain's bookstore event will begin at 11 a.m. while the evening portion of the tour de lit will be held on the campus of USC in Taper Hall, Room 101 at 7 p.m. She is slated to address the school's Republican club and answer some questions. Hopefully some of those will be about her blog: McCain Blogette, a deliciously pedantic collection of diary posts from the campaign trail and photos with such riveting captions as: "The 'On the Air' sign is lit!" during an NPR interview when, yes, the "On the Air" sign was on. Sigh.

But I suppose that is to expected from a 24-year-old who wrote in the children's book: "There are a few things you need to know about my dad, and one of them is that if he is elected, he would make a great president."