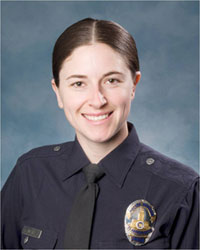 The LA County Coroner's Office has released a partial list of the victim's names from Friday's train collision between a Metrolink commuter train and a Union Pacific freight train. It does not include Robert Sanchez, the speculated engineer, or Paul Long who later died at a hospital.

But it does list LAPD Officer Spree Desha (pictured here). Spree spent most of her last three years at the North Hollywood Station on patrol and training new officers and was most recently assigned to the Office of Operations as a Staff Researcher/Writer. Over her seven years on the force, Desha received thirty-four commendations and was said to be an "extremely effective officer," by one of her supervisors.