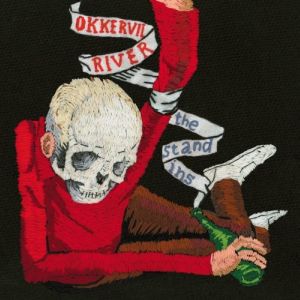 I was late to the Okkervil River party, having ignored the initial hype that accompanied the release of the band's 2007 breakout album, The Stage Names. Pitchfork's glowing review made me recoil in the face of money spent on albums from overhyped bands that so obviously do not deserve exalted praise. (Danielson? Really!?).

But, I eventually did come around to lead singer Will Sheff and his not so merry band of musically talented bandits. I devoured Stage Names, tasted the three previous albums with delicious ferocity and eventually found myself on the front rail for their tremendous Lollapalooza performance this year.

The same sense of brooding and self doubt present on Stage Names is here on Stand Ins with a pinch of growth without betraying their lyrically-based grasp of life's idiosyncratic bullshit.

Take Sheff on Stand Ins anchor, "Blue Tulip:" "I've got my ear against the screen, I feel your feelings cracking me" as drums crash in on a bass line that reminds us that, yes, things may suck but, shit, at least you have your friends. The song ends with a 65-second musical ensemble that might be the elevator music to indie rock heaven and could easily have ended the album.

But it is just the middle point of Okkervil's fifth full length, a prelude -- cinematically at least -- to the closing number: a beautiful, sweeping tribute to 70's glam rock singer Jobriath, aka Bruce Wayne Campbell, whose brief career was at least partly defined by a mortal effort to mass market the fuck out of him. With its horns, piano and twangy guitar, "Bruce Wayne Campbell" sounds like a conglomeration of each of the album's 10 previous numbers. It brings it all together and forces the question: will Stand Ins catapult Okkervil to super stardom?

Though critically acclaimed, Okkervil has yet to break through to the mainstream and it is unclear if they a) think they ever will or, more importantly b) ever want to. When Sheff sings, "And when we pick him up he asks us where this ship will land, but he knows we know it isn't coming down," he seems to be addressing the existential fear of a band in purgatory, stuck between fame and relative anonymity - a pervasive theme on Stand Ins.

That is to say nothing of "Long Coastlines," the album's first song after the first of three wordless interludes. Sheff has never shied away from challenging himself lyrically. His penchant for jamming multi-syllabic parentheticals into a tight ode to things blue should now be legendary. So it might be odd for me to say that even though half of "Long Coastlines" is filled with la-la-la-la's, the 5:32 ditty still represents growth for this band. It is the absence of lyrics that shows Sheff's eagerness to deviate from his strength as a wordsmith.

"Singer Songwriter" takes us through a Wilco-like alt-country ode to nepotism that smacks of good times, travel and wealth until the downer of a closing: "And your world is gonna change nothing, and our world is gonna change nothing." It is a realism (pessimism?) grounded in Socrates' line: "True knowledge exists in knowing that you know nothing."

Despite the highs (and they are high) on Stand Ins, there are lows that were also visible on Stage Names. "Pop Lie," a not so ironic ode to popular culture has all the annoyances of a pop song without much of the band's individual artistry. It differs from something Stuart Murdoch and Belle & Sebastian (they of "We seek to craft the perfect pop song" fame) would create in ending up hollow and wholly unsatisfying. "On Tour with Zykos" ambles on aimlessly for too long without achieving anything until brief piano tickles and soaring strings completes the piece. It's a nice closing but too late to save the monotony that it had proceeded.

Still, there are too many beautiful moments of back stage introspection -- with the soundtrack to accompany each show -- to sink this album and have Okkervil poised to break through. Or at least as far they as want to go, as Sheff says on the album's closer: "He knows we know we'll fly so far til finally stars hold him in all around."