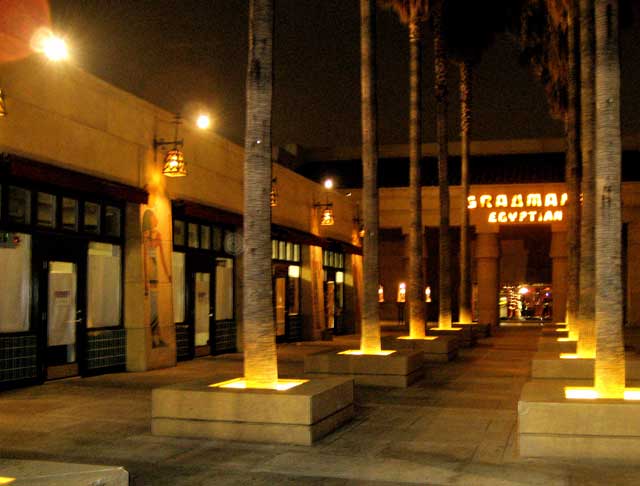 Unlike its unsubtle brother, the Grauman's Chinese, The Egyptian is set back from the street. You just might miss it if you aren't paying attention. It's a delicate place, a secret from the roar of Hollywood. Instead of being taken over by some mall, it has been carefully restored. It was designed by architects Meyer & Holler for Sid Grauman. It was example of the Egyptian Revival Style. The original emergence of the style was in the 1850s but it became a fad in the 20s, inspired by the discovery of King Tut's tomb in 1922. In fact, originally, the plans were for a Spanish style theater, but the plans were changed, to keep up with the cultural zeitgeist.

The Theater cost $800k and took 18 months to build. The first movie shown there was Robin Hood, starring Douglas Fairbanks. It opened on October 18, 1922 and the movie wasn't shown anywhere else. Grauman abandoned the theater for the more famous Grauman's Chinese in 1927. 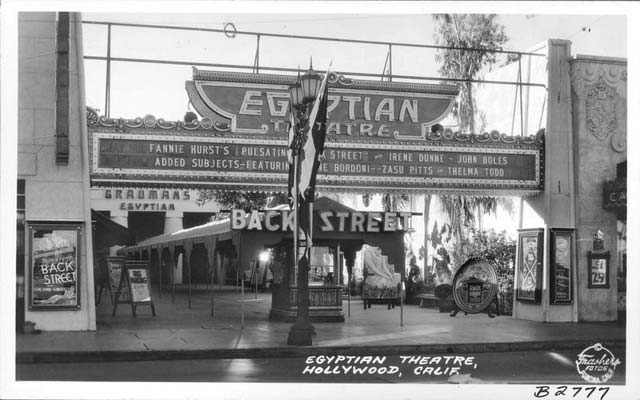 The Egyptian in 1936 | image courtesy the Pomona Public Library

In 1996, The American Cinematheque purchased the Egyptian from the city of Los Angeles, for $1 and a promise to restore it to it's original glory. Because the theater had been built in the silent era, changes to the interior done in later decades marred the original design. In fact, the stage and proscenium were completely demolished when Cinemascope came into vogue in the 1960s. As part of the restoration the acoustic tiles from that remodel were stripped away and the original plaster walls beneath were carefully repainted. The National Trust for Historic Preservation explains the theater's restoration:


Badly damaged in the Northridge Earthquake, the Egyptian Theatre has been stabilized, repaired and structurally strengthened adequately to survive major earthquakes. The project demonstrates application of structural strengthening techniques for historic concrete frames with infill materials.

The Egyptian Theatre's forecourt has been restored to its historic state through the removal of inappropriate alterations, restoration of extant original elements, and replication of missing elements, providing a window into Hollywood history for visitors to Hollywood Boulevard.

The Egyptian Theatre's auditorium has been rehabilitated, uncovering and retaining all extant original materials and elements.

The American Cinematheque has provided an affordable, state-of-the-art venue for the exhibition of good film in a building, which was built for and famous for film in Hollywood.

It reopened the theater in 1998. To check showtimes click here.

LAistory is our series that takes us on a journey to what came before to help us understand where we are today. So far we've been to Val Verde, Thelma Todd's Roadside Cafe, a house in Beverly Hills, Echo Park's Bonnie Brae House, Marineland of the Pacific, and Grand Central Air Terminal, Wrigley Field, the moment LA got its name, the wreck of the Dominator, 1925 "Hollywood Subway." the Pink Lady of Malibu, the Lions Drag Strip, to Disneyland (when it was cheap to get in!), what might be the ugliest building in the city,Union Station--and back again to check out the Fred Harvey Room, and to another train station...and its mystery.

Lindsay William-Ross contributed to this article