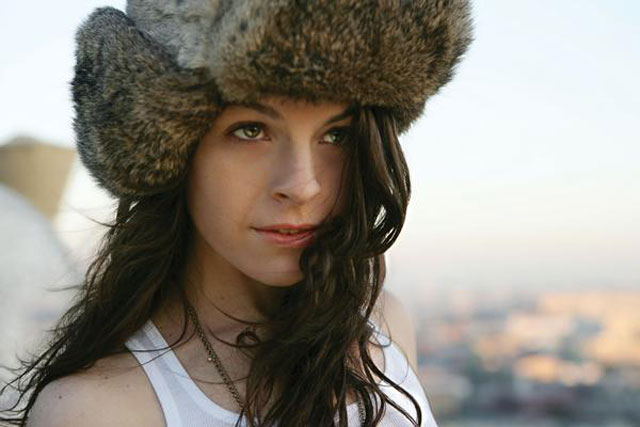 It’s fitting that singer-songwriter Jesca Hoop got her big break via KCRW's morning show, because there’s no more fitting way to describe her music and her life than the word “eclectic.” From her early years performing in her family’s “station wagon choir,” to becoming a homesteader in Northern California and Wyoming, to working as a nanny for the children of Tom Waits and Kathleen Brennan, Hoop has used this diverse background to craft Kismet, her fresh debut album.

Hoop deftly navigates genres throughout the 11 tracks of Kismet, and the result is a cohesive sonic collection sprinkled with influences that run the gamut—Celtic, rock, jazz, pop, hip-hop, cabaret and more. LAist caught up with Hoop just prior to her recent Hotel Cafe gig to learn more about the album, touring and the best advice Tom Waits ever gave her.

In your lyrics you display a pretty broad vocabulary—some of which is kind of a throwback to an earlier age. What do you attribute that to?

Some of that probably comes from theater—reading spoken word in old English. And I also like to approach writing the lyric as though I don’t speak English, so it’s based more on the sound of the word and joining words together that are phonetically pleasing.

Your demos were a big hit prior to the release of the full album, and some of those reappeared on Kismet. Do you have any plans to re-record any of the songs that were on Silver Screen Demos but not on Kismet—such as “Big Fish” and “Fix-It Men”—for a future album?

No, I don’t. I think I’m just going to let them stay the way they are. However, we did just record an acoustic EP of Kismet called Kismet Acoustic. It should be coming out in October, though maybe sooner in the States. We made it to release as an introduction in the UK, but it will be available as an added bonus for the people in the States who love the record.

Will it be an acoustic version of the entire album?

It will include six songs. And one of the songs isn’t off of Kismet—it’s something new that will appear on my second album.

How much thought did you give to the sequencing of tracks on Kismet? Though your styles are eclectic, the record seems to have a natural flow.

That was the hardest part of making the record—deciding what songs to put where, because they are so different. We played Scrabble with it a lot.

“Seed of Wonder” became one of KCRW’s most requested songs when Nic Harcourt began playing it. The song has so many different elements that I was curious how you approached writing it. Was it like a puzzle or more of a linear process?

With a song like that, I work linearly. But you never know where you’re starting in the song. I can’t remember if I started in the middle…I might have started with the second verse.

In an interview you did a while back, you talked about the fact that with “Seed of Wonder” there’s a secret to the song. Would you mind elaborating on that?

The song is about something much more simple than the lyric would ever suggest.

After you made your demos, you really took your time in choosing a record label. What finally made you pick 3 Entertainment?

They were going to let me produce it with my friend Damian Anthony, with the help and guidance from Tony Berg. But we would have hands-on, creative control.

Ever since the release of your record, you’ve been touring quite a bit. In addition to your solo shows, you’ve opened for bands such as the Polyphonic Spree, Matt Pond PA and Elbow. I’m sure it can be a challenge opening for a band whose fans may not already be familiar with you. How do you create that intimate bond with a new audience?

Well, it’s always difficult as the room fills in, but it seems that when we start, the room has an opportunity to listen, and once they listen, they become engaged. If they walk in and go straight to the bar, and they don’t give it a chance, then all of a sudden there’s this environment of chatter.

I think it’s all about starting in a quiet room and doing something really broken down that has lyrical content. Those are the only tools I have to work with.

The Hotel Cafe is that. It’s an intimate spot.

What was your favorite part of the recent Hotel Cafe Tour?

Just being with everyone nonstop. It was a great group of people. We had a glorious time together.

Have you kept in touch with the other artists? Any possible collaborations?

We have kept in touch. We’ll see about the collaborations. I’d love to do something with Jessie Baylin in the future. I love Jessie. Ingrid Michaelson and I have talked about some things together in the future. I’m sure that as time goes by… 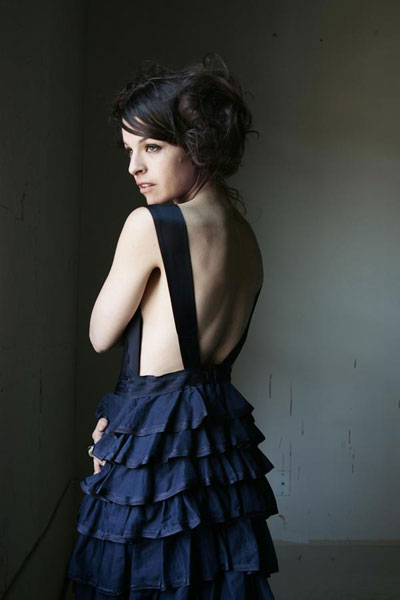 What are some of your favorite places in Los Angeles?

The Hotel Cafe makes me feel at home. I absolutely love the restaurant Sasabune. It’s my favorite sushi restaurant. But I also feel totally at home in Downtown LA. I live down there, and I just love my block.

Now that you’re back home for a couple weeks, have you had a chance to begin production on your new album yet?

Just barely, but we’re in the beginning stages of musing about it.

Is it true that you’re going to include your siblings on it?

I might do that. I’d love to do that…we’ll see how it goes. There’s one song in particular that I have written for them.

Since your background is so eclectic, I have a few random questions based on some of your experiences…

Who’s in the photograph on your album cover?

What’s the last concert you went to?

The last musical you saw?

Funny thing you asked. I haven’t been to a musical in a very long time but we’re going to go see Legally Blonde and Wicked very soon.

What’s the best advice Tom Waits ever gave you?

When I played him the first three tracks from the Sketch Work songs—which was the EP that was given to Nic Harcourt—I told him I was going to record three more. Nic asked me, “When can you have them done by?” And I told him, “Six months,” because I had to borrow people and studio time and it was taking forever.

But Tom told me, “You need to have them done before that.” (laughs) That was very practical, because I know all about being yourself, staying convicted…all that stuff. But as good as all that stuff is to be reinforced, what Tom said was news to me.

How long did it take you to finish the songs once he said that?

Not long. Within a couple months.

Oh no, they didn’t. (laughs) But Sullivan, the littlest one, and I would sing a lot. Singing in the car…

You’ve done a lot of singing in the car throughout your life. You’ve mentioned that your family was a “Station Wagon Choir.”

I actually got Tom to sing in the car with me one time. I can’t remember what we sang, but they were cheesy 80s songs.

What advice would you give to aspiring nannies?

Never ever ever ever steal anything. And don’t worry if you shrink a sweater or fill up the Cadillac with diesel fuel, because that’s the price they pay for having someone else take care of their shit. (laughs)

How about advice for aspiring singers?

Don’t smoke cigarettes if you want an upper range. And don’t sing like other people. Sing like yourself.

With the election coming up, I was curious if you consider yourself to be political. Any candidates/causes you’re supporting?

I’m supporting Obama, although I haven’t been following politics as closely these last few weeks. Being on a tour bus for so long, you lose track. But I’m just ready for a change and I like Obama’s character and attitude—not that I trust politicians, but I’m willing to give him a shot.

In the past you’ve talked about some of your favorite artists and guilty pleasures. I have a short list here and was wondering if you could tell me your favorite song of each of these artists:

The Beatles?
Gosh, that’s a really hard one. Probably “A Day in the Life”

Tom Waits?
My recent favorite of his is “Hoist That Rag” from his album Real Gone

Thanks for speaking with LAist Jesca!

Hoop will perform tonight at the West Beach Music Festival in Santa Barbara. To sample some more songs from her debut album, visit her online.