Death Toll at 18 in Metrolink Crash, Expected to Rise 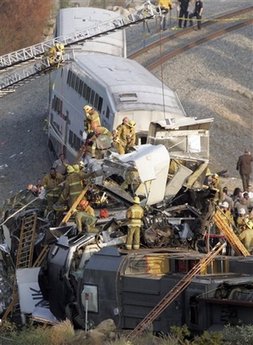 At least 18 were killed and 135 injured (about 100 of those were taken to hospitals) in yesterday's head-on collision between a Metrolink commuter train and a freight train in Chatsworth, according to officials. The death toll was expected to rise as heavy equipment lifts the downed locomotive this morning, said Metrolink spokesperson Denise Tyrrell.

Metrolink train 111 bound from Union Station to Oxnard, carrying 225 people, collided with the freight train (4 Union Pacific employees were on board) at 4:23 p.m. on a 45-degree bend of single-track on the Ventura County route in Chatsworth. Los Angeles police Officer Spree Desha, 35, was among those killed in the crash.

See the latest AP video report below and photos from the scene by LAist's Zach Behrens here.

About 250 fire department personnel and 200 police officers were on the scene before dawn.


According to emergency response agencies, injured Metrolink passengers are being transported to the following hospitals:

Family members of passengers on board train 111, please call (800) 371-LINK for information.