What a McCain/Palin White House Could Mean for California 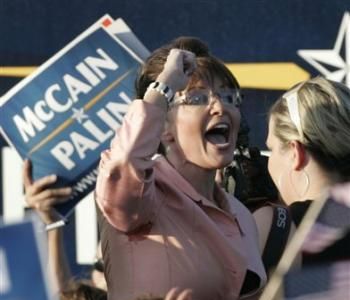 Five days ago, Republicans hammered out a draft of their 2008 convention platform that called for, among other Conservative ideals, "completing the border fence" between the United States and Mexico and curbing Iranian nuclear armament. (While they asked to work "diplomatically" with the Iranian "regime" — presumably Ahmad Ahmadinejad and the Mullah's who actually the run the country — they also call the leadership "aggressive and repressive." Smooth.)

Missing from the platform was a call to drill in the Alaskan National Wildlife Refuge, a controversial set of land known as ANWR populated by hundreds of rare animal and plant species some believe holds the key to our current oil dreams.

Grandpa McCain has long opposed drilling in ANWR as a means to increase our oil output and lessen this country's dependence on foreign sources of oil, but his running mate, Miss Congeniality Palin, has supported it during her two years as head of Alaska.

Palin's support for drilling in Alaska — and McCain's recent policy shift toward allowing companies to extract oil off the shores of California and Florida — could represent a massive change in federal off-shore drilling policy that could have a decades long affect here, on the natural landscape in one of the union's most populous states.

Rasmussen Reports found that 67 percent of those polled support offshore drilling while 64 percent believe it lower gas prices (though, as we will find out, they are incredibly misguided.)

Drilling in the Pacific and Atlantic oceans and off the Gulf of Mexico is largely off limits, save for a relatively small tract in the eastern Gulf. The federal prohibition is set to expire in 2012 when the current against exploration expires.

No one doubts there is oil beneath the surface of our most immediate shores. The federal government estimates found that 18 billion barrels of crude oil and 77 trillion cubic feet of natural gas could b bubbling beneath the Pacific, Atlantic and Gulf of Mexico. Ostensibly, if we drill our own oil we would not be slave to the Saudis and other oil rich states who largely control the oil cartel. Logically, if we cut out the middleman and go straight to the source, we could drive down gas prices. 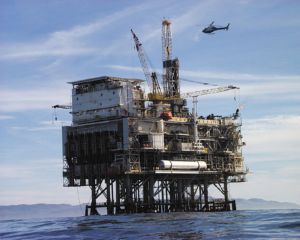 Lower gas prices? Fuck yeah. Cutting off the umbilical chord of rogue regimes whose bloody hands are our only means to drive millions of miles a year? Count me in.

The reality of the situation is that off-shore drilling could have a disastrous affect on the environment for years to come and will not offer any short term relief.

Last year, the Environmental Information Administration, a wing of the government, reported that:


Access to the Pacific, Atlantic, and eastern Gulf regions would not have a significant impact on domestic crude oil and natural gas production or prices before 2030.

Why? Because drilling would begin no sooner than 2012 and production would not be expected to start before 2017. From 2012 to 2030, the EIA projected a 1.6 percent increase in domestic crude oil production and that "because oil prices are determined on the international market...any impact on average wellhead prices is expected to be insignificant."

Holy shit. So there would be no change in gas prices until 2012 at the very earliest and even then not much?

Add to that those same commie bastards inside Bush's own EIA said that Saudi Arabia, who provides about one-fifth of the world's oil reserves and some of the lowest production costs, "is expected to remain the world's largest net oil exporter in the near and long-term."

Many of the prohibitions against drilling are rooted in well-placed fears that environmental disasters could wreak havoc on fish and birds who live in or near the sea. In 2002, an oil rig exploded just offshore near New Orleans and thirty years earlier in Santa Barbara an offshore rig spewed oil toward the shores after a similar pratfall that decimated the local wildlife population.

Most contend that drilling is safer now than it has been in the past, but environmental concerns remain. The rig itself could release heavy metals into the ocean, killing scores of fish and then there is the terrorism gambit:


platforms in the United States are believed to be potential terrorist targets. Agencies and military units responsible for maritime counterterrorism in the US (Coast Guard, Navy SEALs, Marine Recon) often train for platform raids. [Wikipedia]

One of the greatest knocks so far against Palin is that she has no foreign policy experience (and living next to Russia does not count, as Larry Elder tried to tell his flock of listeners Friday). But Miss Congeniality does know about energy and oil as her state leads the country in exploratory drilling.

If McCain chooses to capitalize on her domestic energy policy strengths, surfers and boaters on the Pacific won't just be able to enjoy that famous California sunshine on the horizon.