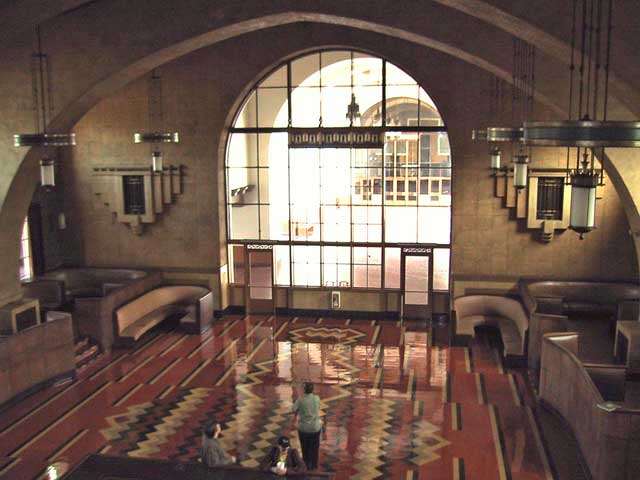 While we're talking about train stations, a man by the name, Fred Harvey forged a partnership in 1876 with the railroads to open chains of hotels and restaurants along the railways, they continued to be built and operated through the 1940s, though Fred Harvey himself died in 1901.

They became a civilizing force in the wild west. Food was served on china, and coats were required in the dining rooms.

It's thought that blue plate specials were started by the Fred Harvey company, seeing as they appeared on their menus as early as 1892 — thirty years before they appear anyplace else. They were so named because they were served on blue patterned china. 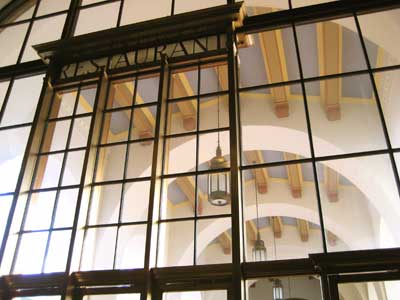 Harvey Rooms and Hotels were often buildings of great beauty, designed by Mary Colter (more on that later). They were clean, efficient, served good food, dished up by clean young women, imported from the east coast, paying them $17.50 a month with free room and board. These jobs were some of the first decent work for women who wanted to come west, (besides teachers and domestics).

In 1946, MGM released The Harvey Girls, a musical starring Judy Garland and Angela Lansbury, based on the novel by Samuel Hopkins Adams. In the sixties, until the mid-seventies, with train travel dwindling, the Fred Harvey organization made a go at roadside rest stops -- mounted on bridges above the Illinois Tollway. The company itself was sold in 1968. 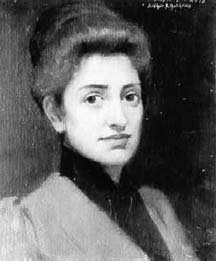 Mary Colter
We can't talk about Fred Harvey without celebrating his master architect, Mary Jane Elizabeth Colter. Born in 1869, Colter moved around the frontier in the years after the Civil War. After her father died in 1886, she attended the California School of Design in San Francisco. After graduation, she taught mechanical drawing at the Mechanical Arts High School in Minnesota. In 1901, she began working at the Fred Harvey company as an interior decorator, becoming his full time architect in 1910.

One of the few rugged female architects in the business, a chain-smoking perfectionist, Colter worked in the Fred Harvey company for 30 years, completing 21 projects, and worked uncredited on countless others. Her structures were a combination of organic, indigenous structures (generally of Native American origin) and a modern, commercial sensibility. She was very in tune with the history of these buildings, and the land around them. She was a huge influence on the Pueblo Revival style, examples of which include the Franciscan Hotel by John Gaw Meem. 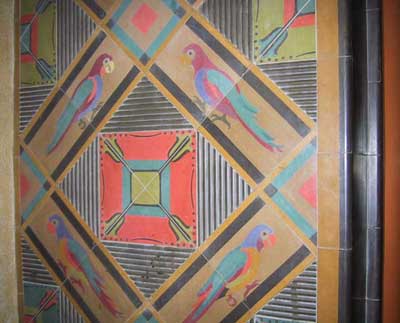 The Fred Harvey Company owned the the land in and around the Grand Canyon, and Colter designed many distinctive structures there, including, Phantom Ranch, Hermit's Rest (named after Louis Boucher, a hermit who gave tours of the Grand Canyon in the 1890s) and Bright Angel Lodge, with its "Geological fireplace" which featured the different rocks featured in the Grand Canyon in chronological order. Bright Angel Lodge became the template for National Park Structures for years to come, inspiring the "National Park Service Rustic" style, which featured site materials, and large scale design elements.

Other notable Colter structures include La Posada Hotel in Winslow, AZ, The Hotel Alvarado in Albaquerque, NM, and her masterwork, The El Navajo in Gallup, TX. The latter two of these buildings were demolished in her lifetime, though La Posada has been completely restored. She died in 1958, in Santa Fe, New Mexico. One of her last projects was the sleek and moderne restaurant and bar space at Union Station, in Los Angeles. Now the space, along with the original ticket concourse, is closed to the public, though they rent the spaces out for movie and tv shoots and private parties. 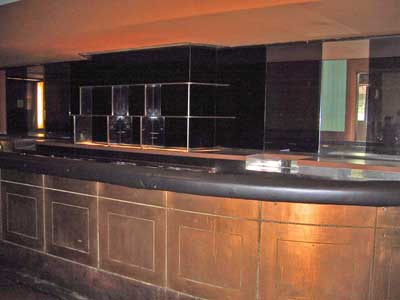 Mary Coulter never achieved the notoriety of some of her fellow turn of the century architects, such as Frank Lloyd Wright or Irving Gill, but her work fired the imaginations of a new breed of travelers who were eager to travel faster than anyone ever had, to come out west and to see the rich past that this new land had to offer.

All photos by Jacy for LAist, painting from Wikipedia

LAistory is our series that takes us on a journey to what came before to help us understand where we are today. So far we've been to Val Verde, Thelma Todd's Roadside Cafe, a house in Beverly Hills, Echo Park's Bonnie Brae House, Marineland of the Pacific, and Grand Central Air Terminal, Wrigley Field, the moment LA got its name, the wreck of the Dominator, 1925 "Hollywood Subway." the Pink Lady of Malibu, the Lions Drag Strip, to Disneyland (when it was cheap to get in!), what might be the ugliest building in the city, and Union Station.